Homepage / Community / Adapting and Embracing: Pregnancy as an Athlete

Adapting and Embracing: Pregnancy as an Athlete 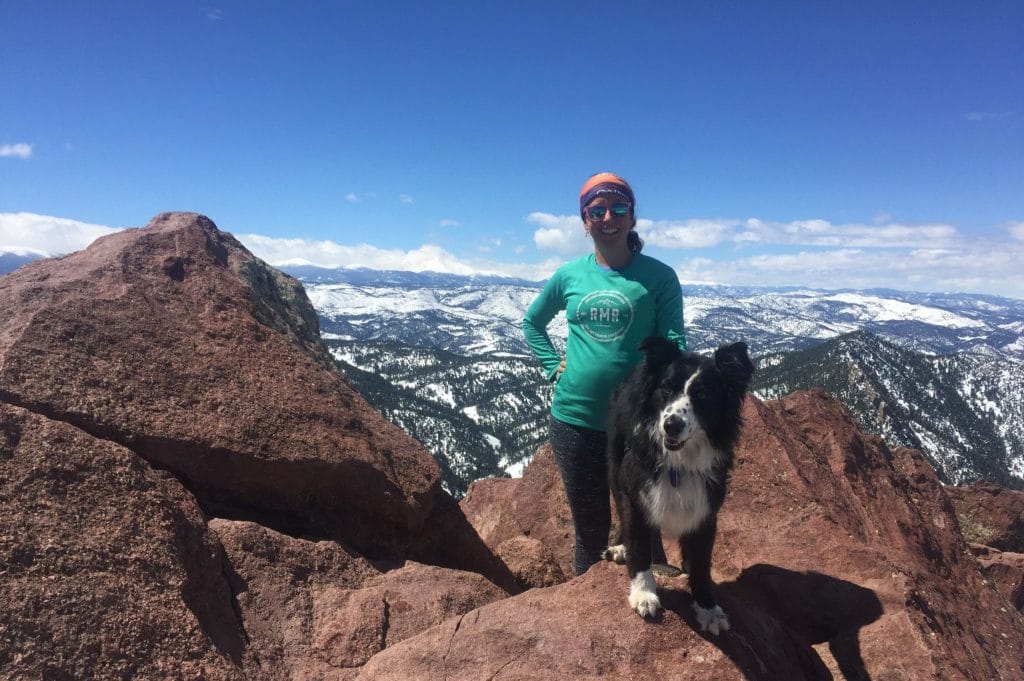 ♫ Slow down, you move too fast. You’ve got to make this moment last. ♫

I find myself humming along to Simon & Garfunkel as I hike up the steep steps of Fern Canyon in Boulder. It’s been months since I’ve actually run this trail or even hit “start” on my GPS watch. My pace has slowed yet my breathing is labored. Kea dog enjoys the opportunity to find more interesting sniffs and catches up on her mountains of pee-mails.  There’s no one else to be seen on the summit of Bear Peak but I’m not alone. As I scramble up to the highest rock I feel the pitter-patter of a pair of tiny toes. I imagine they are enjoying the fresh mountain air as much as I am.  Despite lugging around about 20 extra pounds of weight so far, I feel a lightness and love that I’ve never quite felt before.

But it hasn’t always been this romantic.

Early this winter I noticed myself huffing & puffing a little heavier than normal on a couple of easy long runs with friends. Maybe I’d been slacking off a little too much in my self-imposed “chill-time” after an intense summer of Big Horn, UTMB & UTMF or maybe it was just the cold air messing with my lungs… I thought to myself.

It wasn’t long before a certain two pink lines confirmed the real culprit: I was pregnant! And just like that the main event on my calendar was now my due date, and, for the first time in my running career, I had a little coach who would call the shots over this 9-month training block.

As excited (and terrified and nervous) as I was about this new adventure ahead, I was also cautious. My husband, Ryan, and I had decided to temper our enthusiasm for the time being and limit the news to our immediate family for the first few months. But keeping a secret this big ain’t easy! As an active member of Boulder’s Rocky Mountain Runners, I’m hardly ever not running with people and every weekend is jam packed with some sort of ridiculous long mountain adventure with equally ridiculous friends followed by afternoons at the local breweries.

Maybe it was the adrenaline of the news coupled with the excitement of the new year, but shortly after finding out I felt a surge of energy and super-human powers. Thankfully, that lasted long enough to fulfill a dream of mine to summit Iztaccihuatl, one of Mexico’s iconic peaks, in the footsteps of my dad and grandfather and now all of the sudden with the soon-to-be footsteps of the 4th generation Koester in-utero. Regretfully, the super-preggo powers seemed to dwindle by the 2nd month just as the enthusiasm of a new year of running with new races and goals reached a fever pitch in town:

“Where’ve ya been? What are your plans for this year? Think you’ll run Big Horn 100 again? Are you joining us this weekend for [insert awesome long mountain run here]?”

Now I could hardly hold a conversation at a pace which would have been easy just a short while ago. Some days I’d feel tired enough to want to take a short nap on a midday run. On Mondays I’d trail behind the group on our weekly evening run up Green Mountain. My energy crashed and my heart rate surged. Publicly, I hid behind the excuse of a season of hectic work travel as I opted for more solo runs than usual and skipped the weekend shenanigans:

“Flying all over the place for work. Oh, probably the usual slew of local races but I haven’t had a hot second to figure it out yet. I’d like to. I would but… ummm… I have to wash my hair.”

I bullshitted as clumsily as I fake-drank pints of beer at the pub.

I’d made it through the delicate first trimester and survived a good dozen national and international flights with minimal vomiting. Whew. Time to spill the beans – we surprised and celebrated our news with friends. It was a relief, and hearing ourselves say the words out loud certainly added an element of realness to the whole thing. But I didn’t feel like myself.

My body was changing quickly and, to put it bluntly, I felt like a fat potato. Whatever pregnancy glow people talk about is pure crap. I had the radiance and swiftness of a slimy earthworm flopping around in the dirt. I felt like the strong and nimble mountain running body I had built over the past decade of ultrarunning was vanishing before my own eyes. My face was as green as my RMR shirt when I waved people off at the trailhead watching them enviously as they ran effortlessly into the wilderness. I could no longer keep up. I felt overwhelmed by a mad case of FOMO and questioned everything:

If this is my happy place where I feel most like myself and yet I don’t feel like myself at all anymore, is it still my happy place? Will I ever be able to “catch up” and reclaim my body and my strength after I’m done growing this tiny human?

The feminist in me struggled with my identity change as I went from “woman who participates equally” to “wife on the sidelines.” I felt lost without my own personal ambitions and athletic challenges. I didn’t recognize myself in the past tense “I used to… I did… Back when…,” I missed the strong, confident and assertive “I am… I will… I can…,” that I was used to.

All kinds of ridiculous existential questions and feelings clobbered my mind.

“Remember, you’re neither sick nor injured. Just listen to your body and enjoy the ride.”

My midwife imparted these words of wisdom at my first ultrasound. There were days early on when I definitely felt sick. And a nice long stretch in the middle when I felt as inconsolably distraught as an injured runner. It was proving hard to override the athlete’s voice in my mind and actually listen to (and accept) my current body. Where the heck was that ride I was supposed to enjoy?!

And then, I started feeling the flutters which turned into punches, rolls, squirms and full on karate chops in the rib cage. It kicked some sense into me. I am not a lumpy potato! I am not a “former” athlete or any less strong. I am just pregnant. Grower-of-tiny-human! And that’s pretty darn cool. I have two brains and four legs!

I have just a few weeks left before we get to meet this tiny human, but I’ve already learned the first of many lessons from my little coach. I have learned to Stop and Be. I have learned that I am more because my mileage is less. That the speed and grace with which I ascended and descended does not diminish the fact that I am still standing on the summits of mountains. I am still me, still out here in this beautiful world with the added bonus of having the company of a tiny developing passenger onboard. Heck, I’ve even finally embraced that I’m in good shape!

Yes, the trails feel different but that’s because they are different these days. And this difference is better and stronger. I am not on the sidelines but in the thick of it, literally, full of life. The trail has always been my treasure trove of adventure, love, learning and growth. It’s been my getaway, my hardship, my peace, my home. It still is – and it is my greatest privilege to share it with you, tiny human.