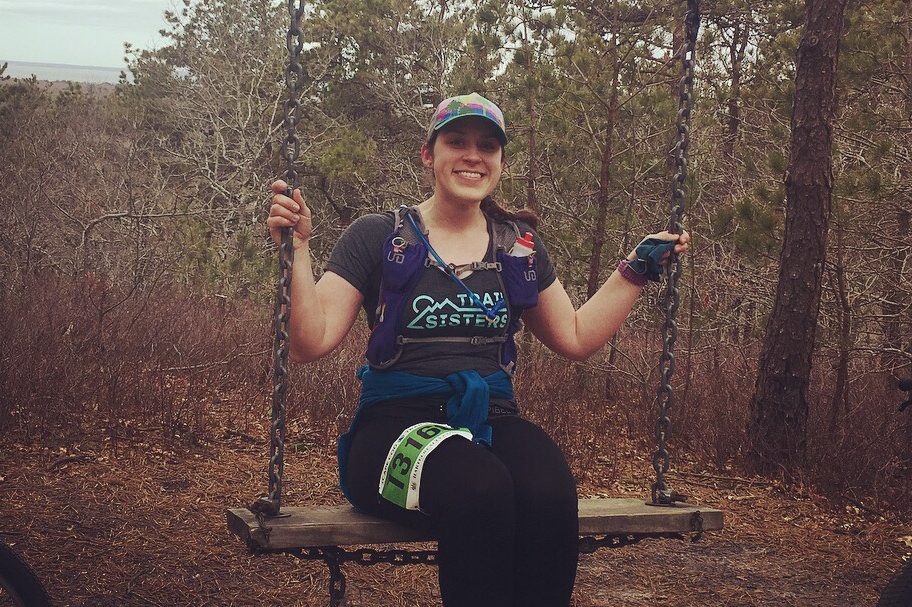 I found myself in Mashpee, MA at the Marathon Sports picking up my race bib for the Cape Cod Trail Race half marathon over a year after my last race. I hadn’t been running for almost 9 months due to burnout after my first ultra, but here I was about to toe the line after only three months of fairly lackadaisical training. My fiancé and I drove down the day before the race, and I was feeling nervous about whether I had trained well enough for my first race “back.” I also still hadn’t entirely figured out what my plan for race morning would be in terms of: 1) how I would get to the race start and 2) what I was going to do for breakfast before the race.

Both of those issues are not things I typically leave for the last minute. Usually, though, I attend races either entirely on my own and I have all evening to figure those things out, or I’m there with others who are also racing so we can brainstorm and figure out logistics together. This was the first time I had gone with just my fiancé, and I felt terribly guilty for potentially stranding him at the hotel if I were to take the car to the race (predicted weather for race day was 30 degrees and snow, so I told him not to come). Hotel checkout was also close to when I might be finishing the race, which was another cause for some nervousness.

Breakfast at the hotel didn’t begin until 7am, but the start for the half marathon was at 8:10am. Would that be enough time for me to order, eat, digest, pay, and then make it over to the start? Not wanting to chance it, the only place open with food was a pseudo-Starbucks in the hotel’s gift shop. Normally, I eat a big bowl of oatmeal a little over an hour before a race starts so I can digest enough so as to not revisit my meal in the opening miles. All they had was a few pastries, so I grabbed a coffee and a blueberry muffin and ate in the lobby quickly before heading out around 7:20 to the race. Did I eat enough? More nerves.

I’m glad my fiancé didn’t come to the race since the weather turned for the worse and it was a balmy 32 degrees, overcast, with wind gusts up to 20mph. The start/finish of the race was in a huge, open field so there was no protection for those wishing to cheer on competitors. Rough return to the racing scene! The race did have a warming tent, though, where a bunch of us huddled until our distance was called to the start line. The first section of the half was to run a 0.7-mile loop around the field before entering the 10K loop (which we would run twice). The first half of us, after completing the extra loop and heading toward the 10K loop, got misdirected and ended up completing another section of the 0.7-mile loop. When we realized their error and finally turned onto the 10K trail loop, my nerves had reached their max. My stomach turned and I could feel breakfast coming back up my throat. A quick head turn to the right and I managed to not get any on myself nor on other competitors. This happened a second time about 2 miles later. Right before I began to truly despair that my first race was going off of the rails, I remembered a tactic from an article I’d read a while back: smiling.

A study published by researchers from Ulster University and Swansea University in Psychology of Sport Exercise showed that smiling while exercising can improve “running economy,” or the amount of oxygen you use at a given pace. It can also have the psychological effect of decreasing perceived effort, which is a reflection of how hard we think an activity is. The easier you think the activity is, the more likely you are to push harder or go faster. While my goal at this point during the race wasn’t necessarily to push any harder, could smiling help calm me (and my upset stomach) down? I figured it was worth a shot!

I reached the first hill on my first pass on the 10K loop and instead of grimacing my way up it, I decided to bare my pearly whites and give it hell. By the time I reached the crest of the hill, wow, was I feeling better! Was this all just a psychological trick? Surely, this is short-lived and it will all come flooding back the moment I start running down the backside of this hill. But it didn’t. My stomach settled, my mood lifted, my pace quickened!

And for the rest of the race, any time my joints or muscles started complaining, I cracked a smile and pushed through it. Hill at mile 9? No problem! I felt so good at the top I asked a stranger to snap a photo of me at the highest point in Falmouth: the summit of Mt. Zig (there’s a big, wooden swing on which to sit for the photo op!). By mile 12.5 I thought for sure the fun was over. I knew there was one last hill and my legs felt like they had steel rods through them. As I approached I could see loads of folks walking and grunting their way up the final incline. I took a deep breath, leaned into it, and smiled my way up that hill. Despite the fatigue, I felt a surge of energy and dropped the hammer to finish strong and was happy to find that I didn’t feel awful after finishing my first race in a long time. I was handed my finisher’s medal, grabbed a cup of hot soup, and was able to make it back to the hotel with plenty of time to shower before checkout. Phew!

I encourage any and all who find themselves either in the pain cave or at a low point emotionally/physically/mentally during a race to try cracking a smile and reminding yourself just how lucky you are to be out there. Take in your surroundings and feel grateful that your body is able to do the incredible things it does!