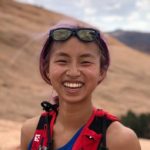 Bailee is a Boulder based trail runner, climber, and yoga teacher. She spends her free time chasing sunrises and maximizing her time in nature. She loves to explore the way that different activities can balance each other out and hopes to help empower others to feel good in movement. She’s currently a 200 hour certified yoga teacher and in the process of completing her 300 hour training.
More From Bailee Mulholland 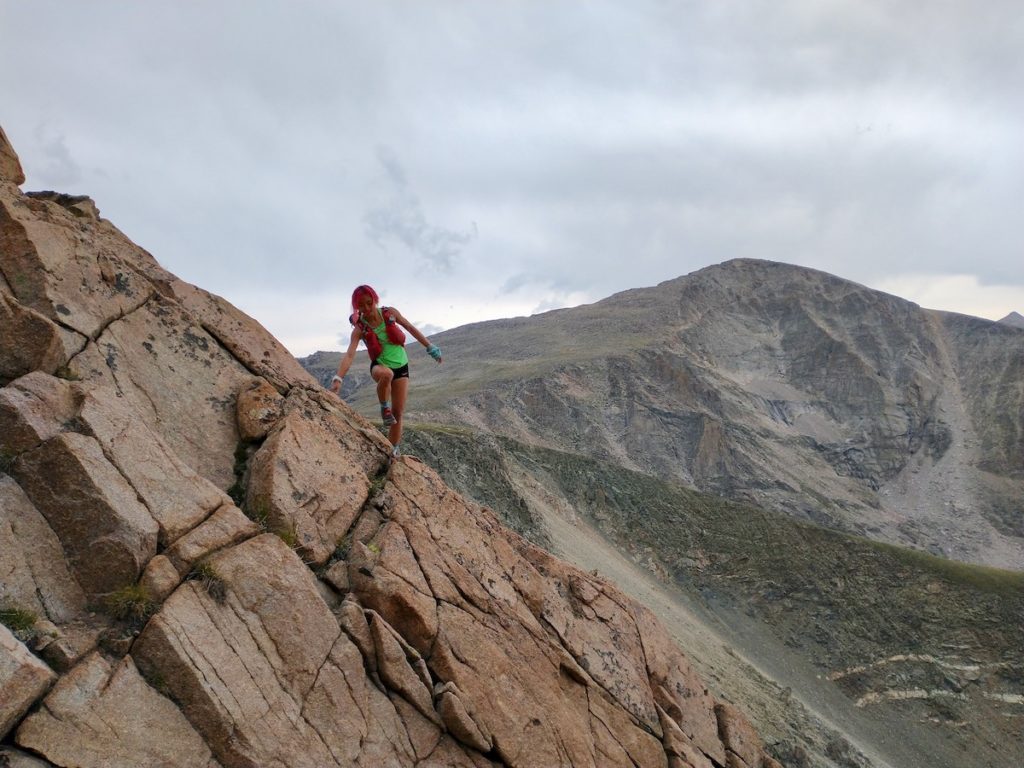 Bailee is a 2021 Trail Sisters and The North Face Adventure Grant recipient. This is her adventure story!

LA Freeway is a route from Longs Peak to the Arapahoes along the Continental Divide. It links the tallest point in Rocky Mountain National Park to the tallest point in the Indian Peaks and tags every peak along the way. Although it’s only 36ish miles long, there is approximately 20,000 feet of elevation gain, tricky navigation, and 5th class scrambling. Only one woman and a handful of men have completed the route. I had dreamed of making an attempt, but never put in the work to learn the route or plan out the details. This summer was the first time I thought that dream might actually become a reality.

Although I have some experience with mountain running, I have very little experience in doing solo adventures. This year, one of my secondary goals was to become more self-sufficient. I completed my first solo fourteener, a few alpine runs, and a handful of mountain trips to visit friends. LA Freeway is a different kind of mountain experience. The runs I did solo seem like neighborhood jogs in comparison. Between navigating unknown technical terrain (I wasn’t able to preview every section of the route ahead of time) and being awake and moving for an estimated 24+ hours, I knew I wasn’t quite ready to make a solo attempt. Luckily, I had a friend who was interested in making his own attempt. After some back and forth, we picked a weekend for our attempt and managed to recruit two other friends to help with the trickier route rounding sections.

I was lucky enough to be able to take the day off work. Originally we had thought we might start Saturday around 2:30am, but decided based on the route and pace, to try for a controversial late morning start.

We did a big car drop, leaving Abel’s car at the Fourth of July trailhead and Skyler’s in Allenspark. I dropped everyone at their respective houses and tried to relax a little before bed.

I tried to reassure myself that everything would go smoothly.

I slept in until almost 7, but still beat my alarm clock. All of my things were prepared so I finished stuffing food in my vest and filling bottles. I did a little yoga and had a double breakfast (eggs, avocado toast, and waffles). The plan was to pick Skyler and Abel up around 10:30 so that we could aim to start by 11. A few minutes before 10, Abel texted and said he hadn’t been able to sleep and had to bail.

I knew last night when he wasn’t feeling well, that it was a possibility he wouldn’t make it. I had planned to do the whole route with him, and now there would be a slight gap between when Skyler left me before I picked up Eric. Skyler, being an amazing friend and human, told me if I needed he would be willing to do the whole first section so I wouldn’t have to be alone at all. It was reassuring to have the option, but I knew it would mean a lot more miles and time in the dark for him. I told him we could wait and make a call when we got there.

The hours seemed to fly by. We were making good progress. I set a steady, but maintainable pace. Things got a little spicy near the top of Alice. Skyler was a few feet ahead of me and came running back yelling “Drop your poles!” His poles had zapped him near the summit. As I approached the last feet to the summit, my hair crackled with electricity so after a quick tap, we booked it downhill. Luckily, it seemed like the electricity was contained to the area surrounding the peak and we were able to continue on.

“We’re doing it!” Tanima was a better than expected short and sweet summit. The weather mellowed out and evening was approaching. We finished Isolation right as it got dark. We hiked for as long as possible without headlamps, but eventually broke them out when the last light disappeared. The moon peaked out from behind wispy clouds and the wind had disappeared. I expected Skyler to head home after Ouzel, but the evening was pleasant and he was kind enough to join me for an extra push up Ogalalla. We followed the gpx line and tried to avoid wandering off the edge of the ridge. Skyler split off after the summit and I headed into the dark feeling confident I would finish strong.

I promptly cliffed myself out. What had felt so simple and easy with Skyler became much more confusing. I blasted some pop music and managed to make my way back to the route. The rest of my solo section went as smoothly as I could hope for. I occasionally wandered off track and into slippery terrain, but managed to maintain a steady pace and mostly stuck to the gpx line.

I was running just a few minutes behind my projected 2am arrival at Buchanan Pass, but was still doing well. In the distance I saw a headlamp and figured it had to be Eric (who else would be wandering around in the middle of the night?!). Unfortunately, in my excitement, I forgot to pay attention to the route and wandered into some chossy, steep terrain. After some shenanigans I made it back to the main trail. Eric was still a little ways down from the meeting spot. I waffled between going out to meet him or waiting for him. I realized that Sawtooth was basically an out and back, so I sent him a quick message and told him I’d meet him after. By the time I descended Eric had arrived.

Thunder rumbled in the distance and dark clouds seemed to extend in all directions. My phone was dead, I was unexpectedly alone, and I had been moving for more than 20 hours.

I was torn between continuing on- the end was so close (or at least in relation to where I had started)- and bailing down what was almost certainly a *insert colorful language here* gully with loose rock and trying to hitch a ride home. Then the thunder was directly above me. And I had an immediate and rational (slightly irrational) moment of panic.

“I need to get off this ridge NOW.”

I scanned the terrain around me to try to find a line down to the ground. In an earlier scouting mission, Abel and I had bailed from a similar spot, and taken the worst gully imaginable. Loose rock, tenuous holds, and some committing moves. I wanted to avoid that. I decided to hug the glacier in the hopes the snow/ice might provide some traction and relief from the endless loose rock.

Every move sent a cascade of gravel downhill and sometimes bigger rocks. I crawled at an excruciatingly slow pace towards the ground. It started to drizzle when I was about halfway down. The already tenuous rock became slick and a steady stream of curses ran through my head.

Or maybe, Did Nothing Fatal.

How do you define failure? Especially with big mountain goals. If the whole idea is to complete a route, then if you have to bail or don’t accomplish the end goal, does that make the whole adventure a failure?

I’m learning to be a little kinder with myself. After a summer of planning, preparation, and hours of overcoming the challenges of actually making an attempt, bailing was heartbreaking. If I had done __ or made a better decision and not __ would I have been successful?

I don’t think my attempt was a failure. I pushed myself more than I thought was possible. I faced my fear of being alone in the alpine and of navigating technical terrain while tired. I learned a lot (pick a good weather window, pack a phone cable, research the route and options for bailing in case things go wrong ahead of time). I know now that even when it’s hard, I’ll make the safe decision. The season to try again has ended for this year, but the route and the mountains will still be there. I’m excited to continue to learn, grow, and push myself to explore the edge of my limits.

Bailee is a Boulder based trail runner, climber, and yoga teacher. She spends her free time chasing sunrises and maximizing her time in nature. She loves to explore the way that different activities can balance each other out and hopes to help empower others to feel good in movement. She’s currently a 200 hour certified yoga teacher and in the process of completing her 300 hour training.
More From Bailee Mulholland