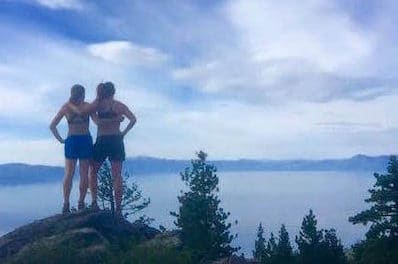 I won my first ultra. It was the Dizzy 50s 50K in Arkansas. I was out of shape … like really out of shape, but I was young (I think 22?), naive, and still stuck in a college racing mentality of “run hard no matter what.” At the time, I was working at this tiny running store. The owners, a triathlete couple, were absolute assholes. Like, completely. They told me I was too fat to win an ultra, so I had to run as hard as I could to prove them wrong. I think they thought I was lying when I told them how race day went. While I was proud of myself for finishing, the feeling I got when I saw their disbelieving faces felt, somehow, more important.

Later, when I moved to Colorado and really started training, I decided I had to be sponsored. To be an “elite” runner meant I had to run for an outdoor company and that I had to run certain races that meant “something” in the ultra running world. After a race in 2011, my day came: The North Face called and before I knew it, I was signed onto their national team. It was a dream actualized. I’d proven something I felt mattered.

Then, I got adrenal fatigue. And that’s a whole separate story that doesn’t exactly fit in here. But I didn’t race for a long time. In fact, I’ve only raced once since …. and it was maybe an F or G race, so you have probably never heard of it.

But man, I ran a good race that day. I ran one of the best races in probably five years that day. There wasn’t much competition. There was no one keeping tabs on my performance. It was just a “trail sister” trip. My best friend, Blair Speed, and I decided to drive up to this 50K a couple hours from her home in Bozeman and go for a run in the woods.

I changed my perspective of success that day. I realized that I don’t have to run for anyone or in any particular brand of clothing to be a good runner, to be successful. I learned that to be successful doesn’t even have to mean winning (even though to tell you the truth, I sure do like when I win and I’ll push hard to win when I race because I want to see what I can do). But, to be successful also means to live the lifestyle I love, to let running be as organically involved in my everyday as I can possibly let it be and that, ultimately, to simply be a runner, is to be successful. Every single day I go outside and run, I see success. And it has nothing to do with proving anything. It just has to do with that repetitive left, right movement and all the incredible (and ordinary) places I get so see.

And, so, I say to you: Let your success be yours and yours alone and don’t ever let anyone ever set those terms for you.