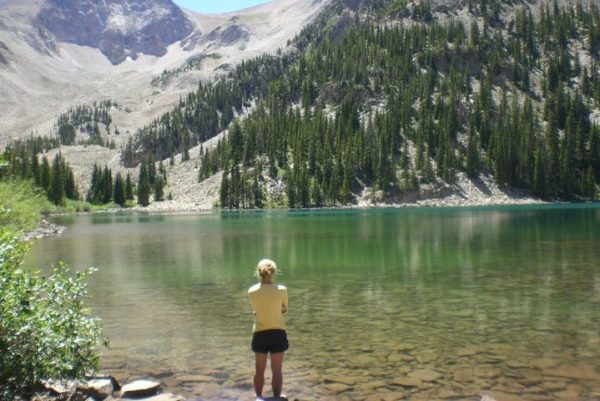 By: Ashley Hunter Arnold
Austin and I moved from Boulder, CO, to Asheville, NC, in late spring this year. We were ready to leave and Appalachia called us. To be honest, I’m still not exactly sure why. … But when people tell you Asheville is a vortex, they’re not kidding. The people here are almost obsessively community-minded. There is more emphasis on local farm-to-table than anywhere else I’ve ever lived and, what’s more, the city is literally built atop the largest deposit of white quartz crystal in the state. There is love energy here; it’s healing.

But despite this, the trails also remind me of all the places I visited as a child. I learned to run on terrain like this. And so I feel cradled in a safe cocoon of rain forest canopy every time I step foot on a trail: the east coast’s tunnels of green.

And that means it’s lush and brimming with life in every crevice; I no longer leave my shoes outside the bus door at night. (In the early spring we were eating strawberries off a bush literally in the front of the bus. All throughout the early summer we were eating blackberries straight from the bush beside the bus and now, we’re eating apples we can literally pick by reaching our arms out the back door while still in bed.)

And, every morning a thick fog blanket sits atop the entire valley below where we’re parked 15 minutes west of town up a mountain in Canton. When I go outside, I feel like I’m standing in clouds. It’s undeniably beautiful.

And a bit later in the morning, when the heat starts to rise just slightly, the sun heat combined with the smell of cut grass and flowering weeds reminds me of where I grew up. It reminds me of being a child, of unencumbered exploration through the woods behind my parent’s house in Kentucky. That smell is pure memory and it sometimes makes me cry.

But when I think about the Rocky Mountains, a place I lived for the past seven years, I feel very far, far away from home in all this lushness. The arid climate and early, crisp mountain fall there just feels normal. As much as I talk about the incomparable beauty of east coast autumn, I can’t help but feel a tinge of longing for a crisp trail run under a golden aspen leaf sea (at least that’s the part I’m missing now).

But it’s also the striking balance of desert meeting alpine and the marked change in air pressure when you ascend a mountain and pass treeline. It’s the way a rock way off in the distance sounds as it tumbles through thin air. It’s those wide sweeping above-treeline fields that border craggy mountain cliffs and the sheer distance and silence of everything below. It’s the expansiveness and the openness of the trails. All that big sky feels cleansing and soul-nourishing.

In a digital age that allows many of the option to work and roam, I fully understand this dilemma of “where to be” is a privilege and, honestly, not really a dilemma at all. I don’t deny that. And yet, the question still exists: Where is home? I guess, technically, our home is on wheels and we can take it anywhere. But I’m not sure the answer is that simple.

A very good friend of mine often tells me that the desire to find something specific in a place is merely a reflection of important inner work, that place doesn’t really matter all that much. I agree in a lot of ways. I think in some cases–like when we just want to get away for a while because we’re uncomfortable where we are–that makes sense. But I’m also a firm believer in the importance of landscape and geographical location that feels most authentic to us. And for those of us that call nature our sanctuary–where we all play and run–place becomes more relevant in at least the daily “surface” aspect of our lives. We thrive in nature and we draw energy and creativity from all aspects of it. And so of course it matters!

In Appalachia, I feel grounded. When I think of the Rockies, I feel care free. They are two very different mountain ranges–one old and wise, one young and playful. And perhaps that dual acceptance is all the answer I need for now. Perhaps I can think of both places simply as one. Then I suppose the feeling of this or that will simply slip away.