Equal Prize and Podium For Women 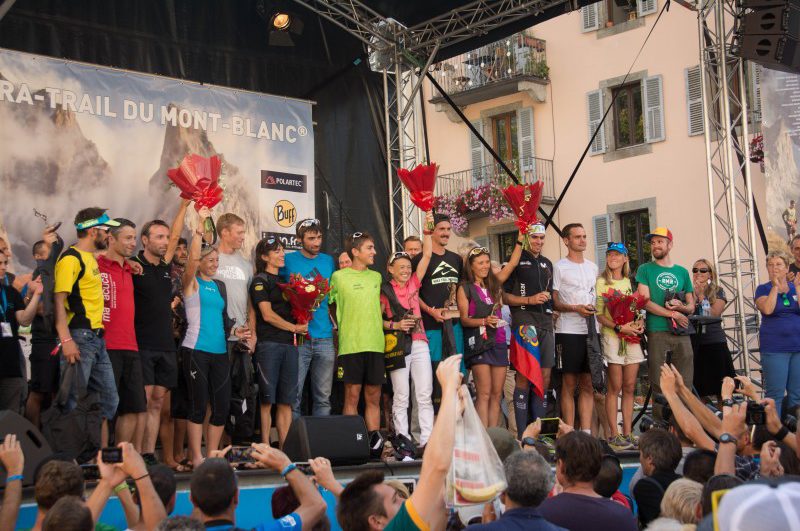 I am deeply troubled by the arguments that I continually hear and see on social media about why it’s justifiable for races to offer women less recognition/prizes than men.

This has come up most recently in the debate against the unequal male/female podium offerings by the Glen Coe Skyline race but this debate is not new and not unique to this race. Every time this comes up those in favor of the unequal prize allocations throw out numbers under the guise of “logic” to counteract women’s “emotional” responses to the discrimination. Time and time again I hear versions of the following statements:

“If you want ‘equality’ then women should compete against men and may the strongest/fastest human win! If women can’t compete with men then they are not equal.”

“Women’s races are less interesting. Not even women care about women in sport. People simply want to see the best/fastest/strongest, which is not women.”

“It’s not sexism, it’s statistics. Women get less because there are less women. Simple math!”

“Women bring in less money than men. It boils down to business decisions.”

I could write an essay on each one of these points, and I will. But for now, and for the sake of brevity, I will consolidate my arguments for equality and refer you to excellent arguments made by others (such as, most recently, the article published by Ultra 168 on Equality vs Equity in Ultrarunning and by Elevations Outdoors on women in the climbing world which has direct parallels to women in the running world).

First of all, let me be clear. Women are not demanding special treatment or easier access to money or accolades. Women are demanding equal recognition for equal performance. Let me pause briefly here to define equal performance. Equal performance is not performance relative to a man’s performance. Why should the men be the standard by which women are measured? Equal performance refers to the fact that women in our sport are running the same races under the same conditions as the men. Women are putting in the same effort, commitment and courage as the men to complete the same challenge and compete against their peers. Women are not running shorter distances or given easier route alternatives or offered more generous time cuts to make it to the finish. Women are doing the exact same thing as the men and yet are not receiving the same compensation or recognition for their efforts. (There are other sports and even disciplines within running where women are not allowed to compete in the same distance as men but that’s a whole ‘nother can of worms that I won’t get into here.)

In terms of the most recent confrontation with the Glen Coe Skyline race directors, after receiving some negative feedback on their 10 to 5 male:female podium, the race responded on Aug 3rd with a statement (which has since been removed from their website) justifying their position and using statistics and numbers to back up their claims.  I found this statement most disturbing:

These statistics do not speak for themselves. First of all, you can fall into a black hole of stats analysis for every event to see which of the two races (men’s & women’s) was, in fact, the more or less competitive one and then correlate that somehow to the size of the field on that particular day, etc. Although for last year’s particular Glen Coe Skyline race it may have been the case that the men’s field was both larger and deeper, as a general rule, the size of the field has no impact on how easy or hard it might be to be competitive. The fact that the women’s field is smaller in size does not automatically mean that it is easier for them to be competitive. The race directors are confusing quantity of participation with quality of competition.

Picture this: What if there was a race with an enormous field of average men competing against one another. Meanwhile there are only a handful women racing each other in the women’s race yet those women are the world’s best. Would you label the women’s race “easier to win” and worthy of less recognition than the men’s? Should recognition and celebration of top performing athletes be a reflection of the size of the field or of the athletic performance of the field? Are female athletes less impressive, capable, competent simply because there are fewer of them? (Again, why is the men’s field size the standard by which the the women’s field size is measured?) Any prize model which celebrates men more than women and justifies it because of the size of each field is completely dismissing, undermining and belittling the athletic performance of the women.

Think of it this way: In the Olympics, the top 3 athletes in each discipline are awarded Gold, Silver and Bronze medals regardless of how many other athletes/teams they were competing against. The medals are not distributed based on the popularity of participation in the event. Some medals are not worth more than others simply because the crowds cheering them on were bigger or because the field toeing the line was larger. A gold medal is a gold medal.

Yes, it is true that there are less women participating in Skyrunning and most long distance mountain/ultra/trail races. However, by choosing to recognize men more than women, the races are perpetuating the message that this is a man’s sport. What would a small child think when he or she sees the top performing athletes called up on stage to be celebrated and counts 10 men and 5 women? Would a woman who has battled against a lifetime of blatant and subliminal psychological and sociological gender-based oppression be motivated to sign up to participate next year or would it further her perception that she is perhaps less welcome or less capable because of her gender?

Furthermore, in addition to the physical size of the field, should the competitiveness of the women’s field be measured relative to the competitiveness of the men’s field or should it be measured relative to what women have accomplished in the past? Are the women’s times getting faster each year? Are there more women running under a certain threshold each year? Are new course records being set in the women’s race? These are more accurate indicators of competition and success than the difference between the women’s times and the men’s times and certainly more relevant than the overall size of the field.

A woman’s placement amongst men does not qualify her competitiveness or non-competitiveness. A woman’s strength, speed, and accomplishments should not be measured relative to a man’s. This is the definition of “The Patriarchy”.

Thankfully, as UTMB did after several years of controversy over their 10:5 podium, over the weekend, just 3 days after releasing a statement justifying their unequal 2017 Prize Policy, the Glen Coe Skyline race directors updated their website to reflect an equal 1-10 podium for men and women.

Races like this one in Scotland have a huge responsibility to our sport — in many ways they are redefining it by challenging runners on increasingly dramatic and grueling terrain. They are hosting races in the world’s most unique landscapes. In addition to setting new standards for environmental stewardship, sports(wo)manship, and international competition, they have the opportunity to set an international standard of gender equality or of continued gender discrimination. I commend them for listening to the voices of the people and for recognizing that it is never too late to right a wrong.