In 2016, Allison traded Prada heels, a Manhattan high-rise, and a decade-long pursuit of law firm partnership for running shoes, a used car, and an adventure in the American West. During her travels, she fell in love with Colorado’s San Juan Mountains, where she now writes, runs and explores. Follow her on Instagram (@liveuntethered) or at www.allisonmsnyder.com.
More From Allison Snyder 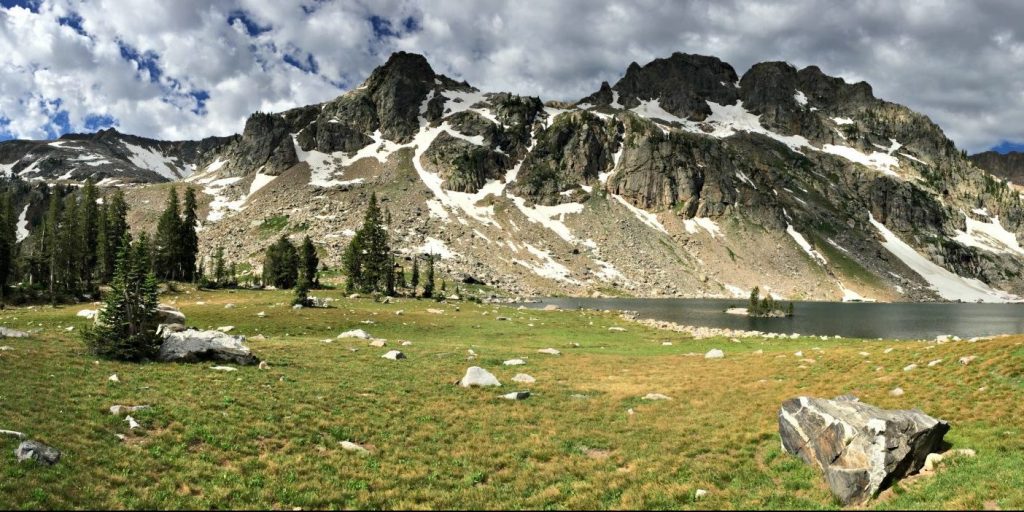 I smacked the snooze on my phone and tugged my sleeping bag over my head. When the snooze sung a second time, I crept from the warmth of my down shell like a tentative turtle as the sun illuminated my tent’s orange hues. The rays pried at my eyelids, but I resisted. I was exhausted. My mind was clouded from one hundred mornings of waking to one person—me.

One hundred mornings of deciding how to spend the day.

One hundred mornings of options.

And my stomach stung with guilt over my exhaustion. How could I be weary? I was doing what few were fortunate enough to do—traveling on my own agenda, for months on end. How could I let even a hint of gloom creep into my day?

My mind drifted to the swivel chair I sat in one year ago. I typed emails, answered phone calls, and counted down the hours to that small slice of freedom that waited for me at day’s end. Now, here I was, hundreds of miles from that air-conditioned office and liberated to do anything. But I was hitting snooze for the fifth day in a row.

Enough, I thought as I sat up.

I yanked the trail map for Grand Teton National Park from the corner of my tent. I unfolded it like the Sunday New York Times and slid my finger over its glossed surface—Lake Solitude.

Perfect for my mood, I thought.

I slipped on a pair of shorts, laced my running shoes, and drove to the trailhead.

Despite my delayed departure, there were few other cars in the parking lot. I filled my hydration pack, grabbed a few bars, and ambled toward the trail.

The nine miles to Lake Solitude were solitary.

My mind’s exhaustion had crept into every muscle, joint and bone of my body.

Several miles in, I came to Inspiration Point. It overlooked Jenny Lake, a two-mile long body of water burrowed at the base of the rugged Teton Mountains. I paused in hope that some inspiration might wash away my weariness. As I gazed at the sun glistening in the still water, two chipmunks wrestled between squeals. I smiled. Distracted for a moment.

But the heaviness soon returned. Though the trail was speckled with blooming bluebells, roaring streams and jagged peaks, what I noticed most was my own aloneness.

Before I embarked on an extended road trip in the American West, I had done some solo travel. But never for more than a week at a time. The solitude was an aspect of traveling that I had not fully considered when I pinned a map of the United States on the wall of my apartment, filled a shoebox with notes and magazine articles about places to explore, and delivered my notice.

Many days, I relished in my solitude. I savored the moments when I could dance with no one watching, sing with no one listening and cry with no one worrying. But some days, I longed for companionship, for connection, for camaraderie. On those days, my spirit alone was not enough to propel me forward.

I knew the self-discovery of solitude was a worthwhile tradeoff for the resultant sadness born of the absence of company. And that sadness no doubt led to greater discovery. But that truth offered little comfort as I crested the final climb to see Lake Solitude flowing from the base of weathered spires to a meadow littered with boulders.

I stretched myself over one of the boulders and gazed at the pockets of snow scattered across the jagged peaks. As clouds sauntered in, I wondered, Will I ever get my energy back?

And with that lingering weariness, I began my ascent.

Less than a mile in, I looked up to see a woman as she stepped to the side of the trail and clapped. “Go get ‘em!”

I smiled and nodded as I passed.

Not long after, another woman shook her head in disbelief as she thrust her fist in the air. “Wow! Way to run this!”

“Thanks!” My smile widened. She reminded me of the way my grandmother always looked at me with puzzled pride when I told her of my trail running pursuits.

When I turned at the next bend in the trail, a man planted his hands on his hips. “How far are you running today?”

“Wow, I’m so proud of you! You’re amazing!” I could almost hear my parents in his voice.

“I appreciate that!” My smile expanded even more.

As I hopped my way down a rock splattered-slope, a woman told me how impressed she was that I was running. I deflected, “It’s way easier coming down.”

“But.” She offered a stern yet understanding glance. “You had to go up to come down. You’re crushing it!”

“Good point.” I smiled and thought of my high school running coach. He always knew how to cut through the self-invented insecurities that fed inaction.

As I traveled the final miles of trail, my mind slipped back decades to a track lined with friends, teammates, and family waving their hands and shouting my name. At seventeen, I didn’t appreciate how special those moments were. And I never would have expected to find that companionship, connection and camaraderie twenty years later, hundreds of miles from my hometown, in Grand Teton National Park.

By the time I was back at the trailhead, I wasn’t alone anymore. And I knew that I never really was alone. The cheers had always been there, I just needed to listen for them.

In 2016, Allison traded Prada heels, a Manhattan high-rise, and a decade-long pursuit of law firm partnership for running shoes, a used car, and an adventure in the American West. During her travels, she fell in love with Colorado’s San Juan Mountains, where she now writes, runs and explores. Follow her on Instagram (@liveuntethered) or at www.allisonmsnyder.com.
More From Allison Snyder