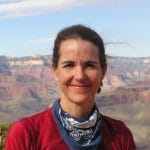 Sophie Speidel has been running ultras since 2002. She has finished over 100 ultras, including Western States 100, Massanutten 100, and Old Dominion 100 as well as the Hellgate 100k eleven times and the R2R2R of the Grand Canyon. Sophie and her husband Rusty have three adult children, ages 28, 26 and 24 who grew up watching their mom transition from road marathons and triathlons to running trail ultras — and they turned out just fine! Sophie works full-time as a school counselor, and in her free time she and Rusty are often found running and hiking with their 3-year-old Australian Shepherds, Cooper and Blue, on the trails near their home in Charlottesville, Virginia.
More From Sophie Speidel 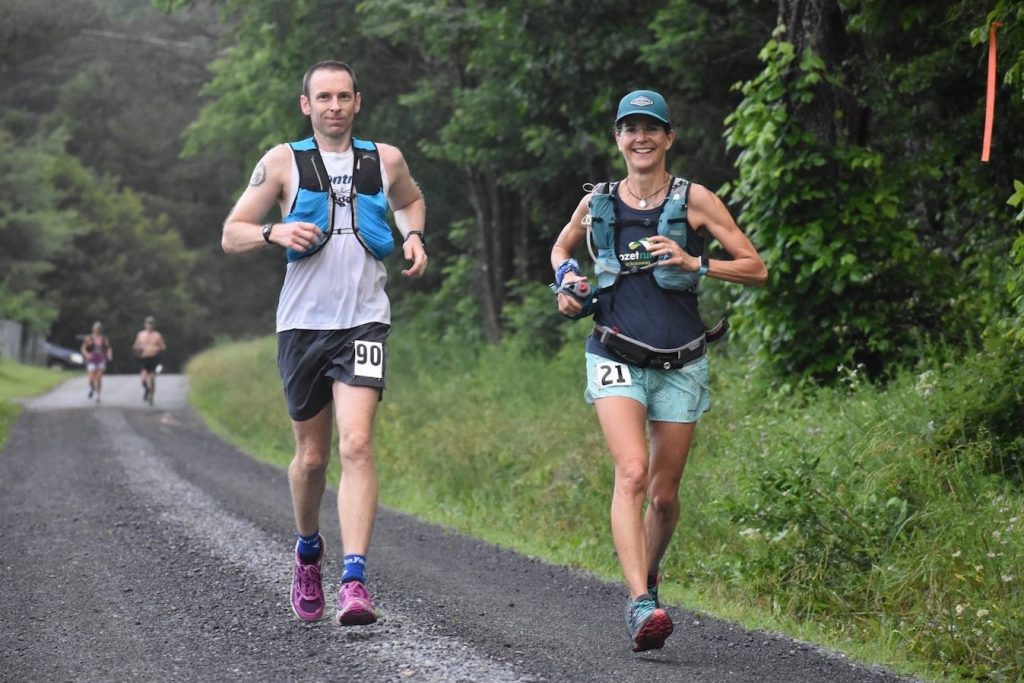 Two weeks after finishing the Old Dominion 100, I’m feeling surprisingly chipper. My legs feel strong, with no lingering soreness. I’ve been able to run easy on the trails with my Crozet Trail Sisters and my son’s Australian Shepherd pup, Cooper. The post-race letdown that I’ve experienced in the past has yet to surface. Huh. I’ve felt much worse after finishing Hellgate 100k! But I’m still waiting for the other shoe to drop…

Rewind back to Friday, June 1. My friends Keith Knipling, John Andersen, Greg Loomis and I are huddled in a booth at a local Woodstock, Virginia Italian restaurant after coming from the OD pre-race briefing. Keith has brought along his OD silver buckle that he won in 2007 (in OD parlance, he was the “First to Finish”) and has laid it on the table for all to touch and admire. It is beautiful, heavy, sterling silver — a smaller buckle by today’s buckle standards, just classy and simple. I’ve never entered a 100 because of the buckle — in fact, I’ve rarely worn the buckles I’ve earned from finishing Massanutten, Western States or Grindstone — but I must admit that I have “buckle fever” this time around. The OD buckle represents something different: to earn it, one must run a lot, and faster, than in most other 100 milers to finish in under 24 hours. The list of sub-24 finishers of OD is impressive and daunting. Names and heroes to me like David Horton, Dennis Herr, Eric Clifton, Mike Morton, Frank Probst, Megan Stegemiller, Janice Anderson, Rebekah Trittipoe, Kathleen Cusick, and Sabrina Little.  Keith and Greg, too. Did I belong with this group? That is the question I am trying to answer.

As OD veterans, Keith and Greg gave John and I sage advice such as, “When you start having negative feelings and hating the world, time for a gel!” and “the first 50K is so runnable, you NEED to run slow.”  I took it all in and added it to my list of things To Do and To Avoid, which I’ve amended for this race report to “What Worked” and “What Didn’t.” Since we are always learning and growing as ultrarunners, I hope these lists prove helpful.

Nutrition. I took in approximately 7000 calories over the course of the race in the form of GU’s Roctane sport drink in Lemon Berry (250 cals per bottle), EFS Vanilla gel (400 cals per flask), Clif Bloks, avocado slices on Pringle chips, and two hamburgers. This came out to about 240 calories an hour, with not one bonk or low energy moment the entire race, which I consider the most important factor in my finish (along with #2 below). Unlike my pal John Andersen, who wrote about his struggles with finding his nutrition sweet spot here, I was able to tolerate a mix of gels, fluids, and solid food throughout the day. This is a huge difference from previous 100s for me, and a total game changer. I practiced with the Roctane, gels, and real food on training runs, as well as running at a pace that I was trained for. Stomach issues tend to crop up when I’m running faster than I should.

My #procrew. I had asked my training pals Jason, Annie, Becca, and Jeff to crew for me way back in January, having been advised by David Horton that having a crew at OD is fairly important, especially for a sub-24 finish. Many have finished OD solo, and I actually love the challenge of not relying on crew in ultras, but given my reach goal of sub-24, I knew I needed to minimize mistakes. All of these people are ultra veterans, and all I needed to do was write down a simple list for them: Take my trash, replace flasks and gels, fill my bladder with water and ice, ask me about changing socks/shoes, kick me out! I changed my socks twice, at mile 47 and mile 75. I changed my shoes (Hoka Speedgoat 2s from Crozet Running right out of the box!) at mile 75.  I was feeling the effects of blisters due to the humid and wet conditions, and Annie and Becca worked on my feet with such precision that I was able to get in and out (and feeling better immediately) in less than 5 minutes. It was incredibly comforting knowing I had this veteran team in my corner in case things went south. I was in expert hands.

Pacing. I don’t use a GPS watch when I run. I used my Apple iwatch with the Strava app for the OD training cycle; I’ve learned that I get hung up on splits during a race, and this impacts my head, and my pace, in a negative way. I ran exact even splits at the Richmond Marathon in November without a watch, so I was confident about my ability to run by feel. I tried to stay within a window of splits run by Jeff Lysiak in 2017 (22:45) and Michele Harmon in 2016 (23:24, when she was First Female). I asked my crew to tell me if I was within this window at each aid station, and this worked well. I actually came in right on Jeff’s splits the entire day, up until mile 86 (see below).

The weather.  Old Dominion scared me for years because it was 100 miles, but also because it was 100 miles in Virginia in June. Read: humid, muggy, hot. Yech. As I wrote in Part 1, I avoided OD because I had convinced myself over the years that I was a poor hot weather runner, but when I decided to take on this challenge, it was important to embrace the heat, suck it up, and figure it out. I had spent the past three years getting ready for the Bighorn 50 by getting in regular sauna training every spring, so for OD I just added time to my weekly sauna sessions. We also had a very hot May here in Virginia, so I was able to get in some serious heat training in during the final weeks before the taper. On race day, we lucked out with overcast skies, temps in the high 70s and 99% humidity. I felt great all day despite the blistered feet, and when the skies opened around 6:30 pm, I welcomed the rain as it cooled things off. Yippee!

The weather. Yup, after a day of clouds but high humidity and dry skies, we got our comeuppance around 6:30pm when the heavens opened. It poured off and on for the next 14 hours, eventually washing out the roads in Fort Valley (but well after the last runner descended into Woodstock to the finish). The already technical orange MMT trail, which OD runners encounter in Duncan Hollow, near Elizabeth’s Furnace and Sherman’s and Veach Gaps, became a swollen, rocky river. Add darkness to the mix, and we had extremely wet and slippery trail as well as thigh-deep river crossings. Fortunately, the temps remained around 60 degrees with no wind, otherwise it could have been much worse!

My Lights. I picked up my “safety runner” Jeff Lysiak at Elizabeth Furnace, mile 75. OD’s mission, according to race director Ray Waldron, is to provide a challenging race where it is “the runner against the trail against the clock” without the help of a pacer. This was extremely appealing to me — I have enjoyed having pacers in previous 100s, but my most enjoyable races have been those I’ve run — and suffered– solo. The safety runner accompanies the OD runner from mile 75 up and over Sherman’s and Veach Gaps before bowing out at mile 86, which is a nice amount of time to chat, catch up on the day, and be reminded to eat and drink. Jeff was great company; he also kept telling me in no uncertain terms to “speed up, Speidel!” as he is a personal trainer in real life. I was having difficulty seeing the trail with the darkness, hard rain and fog, despite my 600 lumens waist light and my trusty old Petzl MYO XP headlamp. (“Old” is the operative word here: I bought this lamp for the 2007 Hellgate 100K, and it spent three months last summer sitting on a highway median strip after falling off the roof of my car. When I finally was able to retrieve it, I was delighted that it still worked, so I assumed it was still working at full capacity. Apparently, it wasn’t — Jeff turned around after a particularly slow descent down Veach and realized that I had no beam left). We switched lamps for the rest of the race, and voila! I could run fast again. I guess every race needs at least one Rookie Mistake. This was mine.

After leaving Jeff at mile 86, I was in the fine company of Keith Knipling and Brad Bishop, and we ran the next 15 miles spread apart but within sight of one another’s lights. Now that I could actually see again, I made great time to the mile 90 crew stop. It was gratifying, and somewhat surprising, to be able to run uphill at mile 90 of a 100! The rain came back hard as we were leaving the aid station and started the two mile climb up to Woodstock Gap, and once we crested the top, Keith made his move and started to hammer down the other side. “See you at the fairgrounds!” he said as he ran past. I nodded to him, and then looked over to the spot on the road where, in 2005, I had begged my husband and crew to let me drop at the mile 85 aid station of my first 100, the MMT100. What goes around comes around: I had literally and figuratively come full circle from that first 100 thirteen years ago. So many mistakes made, lessons learned, friendships forged, adventures experienced. The loss of my father in 2011, Rusty’s dad in 2013, my mom in 2016. Our children grown and living life away from us. The nights lying awake in worry, the carefree days we celebrated… all had brought me to this moment, on a Virginia mountaintop in the pouring rain, older and wiser. My husband, close friends, and that shiny silver buckle waiting for me in those lights below. Grateful, humbled, and a little weepy with emotion, I slowly followed Keith down the mountain, through the sleeping town of Woodstock, and toward the cheers, the hugs, and the finish line.

Sophie Speidel has been running ultras since 2002. She has finished over 100 ultras, including Western States 100, Massanutten 100, and Old Dominion 100 as well as the Hellgate 100k eleven times and the R2R2R of the Grand Canyon. Sophie and her husband Rusty have three adult children, ages 28, 26 and 24 who grew up watching their mom transition from road marathons and triathlons to running trail ultras — and they turned out just fine! Sophie works full-time as a school counselor, and in her free time she and Rusty are often found running and hiking with their 3-year-old Australian Shepherds, Cooper and Blue, on the trails near their home in Charlottesville, Virginia.
More From Sophie Speidel