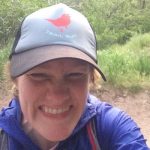 Alison is an elementary art teacher and lives in Stoughton, Wisconsin. She loves illustration, quilt making, reading, and spending long mornings in the woods searching for owls.
More From Alison McDole 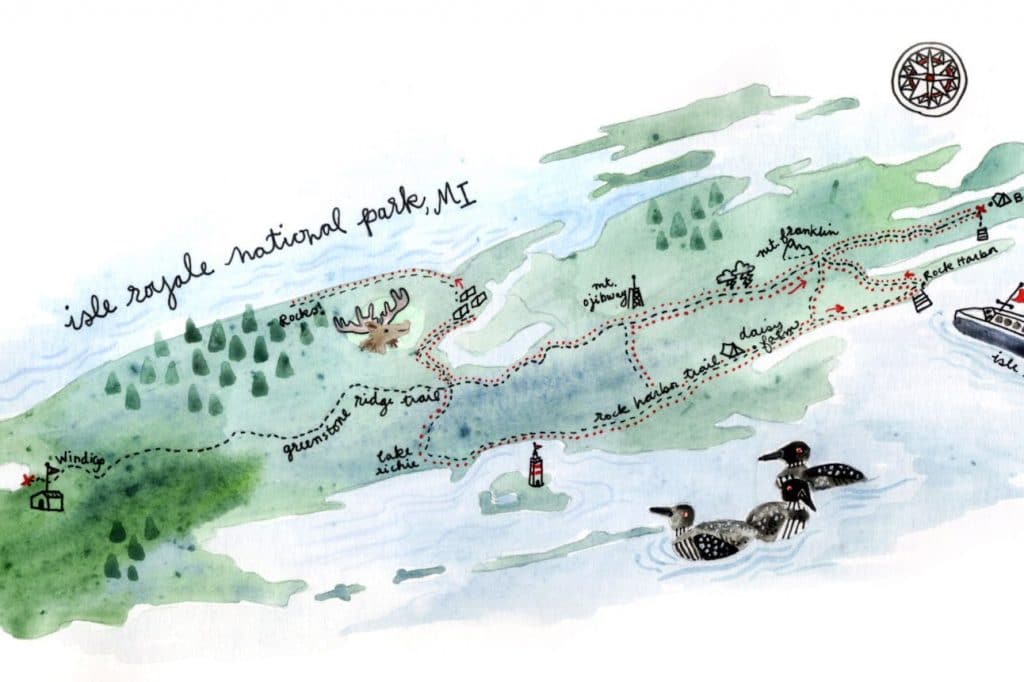 Editors Note: Alison McDole and Megan Haserodt are one of six awardees from the 2018 Trail Run Adventure Grant presented by Trail Sisters, CamelBak and Under Armour.

When you push your limits there is often that nagging voice in the back of your head telling you that you’re not capable, not strong enough, not prepared enough, etc.  And sometimes that voice prevents us from even starting. This Trail Run Adventure Grant presented by Trail Sisters, CamelBak and Under Armour nudged us, two average, middle-of-the pack runners, past that starting hump and gently rolling toward our goal of setting a women’s Fastest Known Time (FKT) on the Greenstone Ridge Trail on Isle Royale National Park. A 40 mile trace etched into the ancient rocks that form a high ridge across the island.

Neither of us had ever attempted a backcountry run where, given the logistical challenges of running on a remote, wilderness island in the middle of Lake Superior, we would be camping a total of three nights and running with our camping gear. Our first hurdle was carefully weighing the pros and cons of every item to pack, trying to keep it light while balancing being prepared enough to handle potential mishaps. Going into this we knew we had the basics, we had each other, and we had a nervous optimism that grew slightly more nervous with a 40% chance of severe thunderstorms forecast for the day of our attempt, a date locked in by a reservation on a three hour ferry ride that had to be booked months in advance.

Our adventure began as we walked off the ferry and into the cold, pelting rain and foggy landscape of Isle Royale, one of the most remote national parks in the United States. Our first leg of the journey was a nine mile hike/run to Lookout Louise, the official eastern terminus of the Greenstone Ridge Trail and where we would spend the night before attempting our FKT. Despite the weather, our spirits were high as we headed out into the lichen filled beauty of the boreal forest.  We were immediately rewarded with an encounter with the famous island moose and a huge beaver dam built on an inland lake. The rain began to lift as we made it up to one of the highest points on the eastern end of the island. The singletrack was a mix of muddy streams from the days rain, slick rocks and bridges, and was fairly overgrown making our pace slow.

Upon reaching the lookout, we began to search for a suitable backcountry campsite. In order to keep our packs as light as possible, our sleeping arrangements were minimal and untested – brand new, lightweight bivy sacks and a tarp.  As the sun began to set we settled in for a long night as the rumble of thunder in the distance and ominous clouds began rolling in. We weathered a long night of downpours and intense lightening as we hunkered down in our bivys; at times the rain was heavy enough to form small rivers that flowed under the tarp and beneath our slightly waterproof bivys. We were grateful for the company of two instead of one during the sleepless night as our 5 am departure crept slowly closer.

The lightning subsided and the rain slowed as we packed up our wet shelter and walked to the wooden post that marked the start of the Greenstone Ridge trail. With cheap, plastic ponchos on we grabbed a quick starting photo, pushed start on our watches, gave the sky one last wary look, and began our run. The pace was slow through the wet, overgrown vegetation that covered the trail in most places only broken up by sections of open, slippery bedrock outcrops. Moose sightings were frequent, often giving us a puzzled stare before disappearing off the cloud-covered ridgeline. Some refused to budge, standing stubbornly in the trail as we waited before finally skirting widely around them through the thick brush. Despite the slow progress we were enjoying our wet slog, nervously optimistic that conditions could improve throughout the day.  And then they didn’t.

After a couple of hours, the lightning increased in frequency, from distant thunder rumbles to frighteningly close. As we approached another open outcrop we made the decision to hunker down off the trail, in the lowest area we could find. Bright flashes of lightning surrounded us followed immediately by loud thunder cracks that seemed to shake the ground. We looked at each other and tried to convince ourselves it had to pass quickly, right? At that moment though, it felt like we were literally inside of the storm clouds.

We weighed the options silently as the lightning snapped around us. We either stay up on this ridge where the last forecast we saw yesterday at the ranger’s station showed the chance of severe storms was highest in the afternoon, meaning we would likely be fighting this weather all day, or we figure out another plan. An additional complication was that in an effort to minimize weight we only had one dehydrated meal; our plan was to re-supply at the ranger station on the western end of the island. We would need to restock food, so stopping halfway wasn’t an option. Then there were those annoying voices…maybe we really aren’t strong enough, aren’t brave enough. Luckily two minds are way better than one – continuing forward on the high ridge in these storms was dumb and letting a change in our plans due to weather make us feel inadequate was also dumb. We were strong, and we came here first and foremost to cover some decent mileage on backcountry trails together. It is important to push your limits but it’s also important to recognize when moving forward is too dangerous or damaging and to be able to mold your goals into something new. Our new goal – find a trail that led off the ridge and run as many miles as we could exploring the lower trails.

We rerouted and in the subsequent two days covered a trip total of 76 miles, almost mirroring the distance of our original goal (40 mile FKT + 40 mile return trip).  We were glad to find lean-to shelters the next two nights, for protection against the storms that continued to roll in and out during our trip. Glad, for each other’s company as we were able to run and explore a new landscape, and excited to reflect and learn from our time on the trail.  And glad for the adventures that await us.

Editors Note: Alison McDole and Megan Haserodt are one of six awardees from the 2018 Trail Run Adventure Grant presented by Trail Sisters, CamelBak and Under Armour.

Alison is an elementary art teacher and lives in Stoughton, Wisconsin. She loves illustration, quilt making, reading, and spending long mornings in the woods searching for owls.
More From Alison McDole