Homepage / Community / Back to Joy 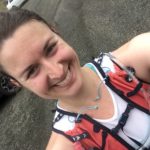 Virginia Reinert left professional contemporary dance in 2016, and went right back to the woods she’d played in as a kid – this time as a trail runner. She lives and runs near Seattle, Washington, and couldn’t imagine teaching middle school language arts & social studies without the joy of trail running to balance things out. She’s currently plotting her first ultra while not grading papers and reading too late at bedtime.
More From Virginia Reinert 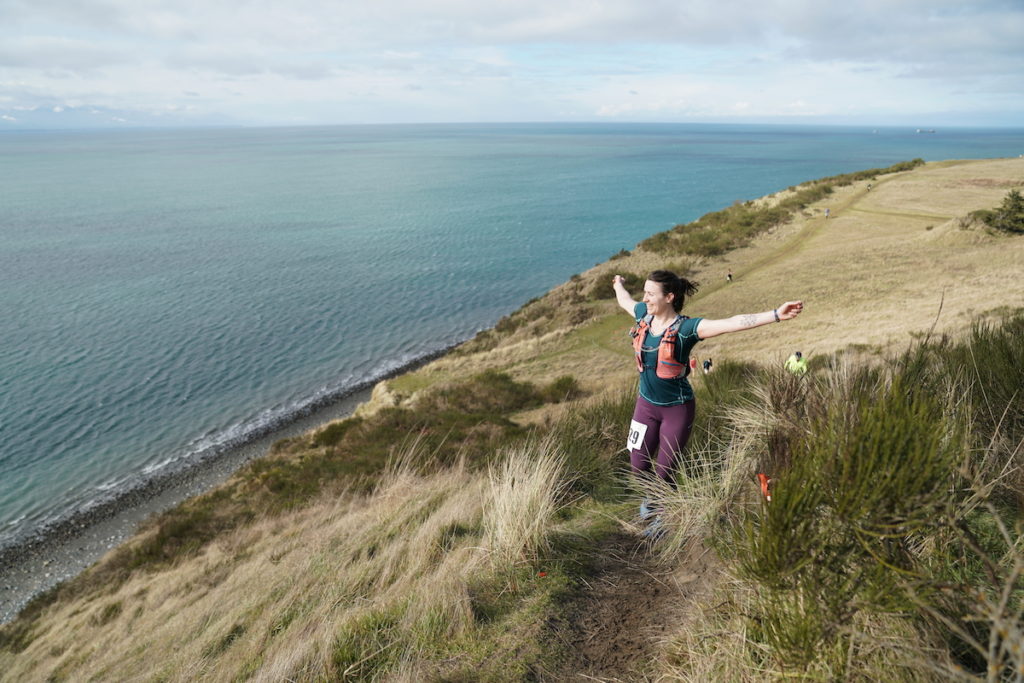 When I went for my first run, I was about 10. I had always been the kid who could play outside for hours on end, climbing trees and skinning my knees roller blading endlessly up and down the long driveway. I’ll never forget the day I first ran three miles on my own. It was summer, mid-morning, already steamy with humidity and I decided to do an extra loop of “the triangle.” Unaware of the concept of a “taper,” I wanted to prove to myself that I could run three miles, since I was going to run a mile race in a couple days while my Dad ran the associated 5k. My elation only slightly dampened by the fact that my Mom was a nervous wreck since I’d been gone for so long (it probably took me thirty-five  – forty minutes), I marveled at my accomplishment – I could keep pushing, and I could make it!

I ran off and on after that, going out for track and cross-country in middle school and always tackling the longest distances. Always, running fought for attention with dance, and dance fought for my body’s attention. When high school started, I had to make a choice: dance or run? I could always go back and run, I reasoned. I couldn’t go back and dance.

I still ran whenever I had a break, mostly because I was, at the time, terrified of becoming “fat.” This pattern persisted into college, where I majored in dance. At the end of my sophomore year everything came to a head. I had auditioned for the BFA in dance, but had gotten incredibly nervous and botched the audition. I added running to my already-intense workout regimen, relishing the release from the confines of the studio and the time alone, away from my roommates – and the way it filled my hours and allowed me not to think.

That summer I did not go away to study at a dance intensive as I had in the past. Instead, I worked as the dance counselor for the local arts camp. Afraid of falling behind, I decided to bring everything I had to the work I was doing – which meant 8-hour dance days and daily runs. It was in the middle of all of this that my boss, the director of the dance portion of the program, began paying too much attention.

What followed is a story far too common – older man takes advantage of vulnerable, insecure, inexperienced young woman by manipulating her emotions and engaging in confusing sexual advances, culminating in the ultimate physical violation: rape.

I could not tell anyone – I even had a version of the story in my head that made it “ok” – he loved me, he cared for me, he hadn’t been able to show his admiration for me in any other way, which meant I was still a good person and, most importantly, I deserved to have a dance job because I was good enough.

It took incredible energy to maintain my fantasy. I turned to running to forget: if I was constantly moving, if I was constantly exhausted, I did not have to think about what had happened. I could keep it at bay – and I received tons of positive feedback for my new sense of abandon and significantly smaller frame from my dance teachers – “you really found something over the summer,” they told me. I was succeeding – and all of the pieces needed to stay in place for as long as possible so that my thin-thread sanity didn’t break.

My body, however, had other ideas. After almost two years of constant pushing and ever-increasing levels of activity, I got injured. In some odd way, it was a relief – I had an excuse to stop. Mostly, though, it was horrible and frustrating. I had become like Buttercup in “The Princess Bride;” where her only joy was in her daily ride, my only joy was in my daily run – the only place I’d found myself capable of feeling my emotions or even beginning to process the significance of my assault. Now, that coping mechanism was stripped away, and I had to deal with healing and my emotions all over again.

The process didn’t go well for several years. I finally instated a personal running ban – as long as I was dancing, I was not allowed to run. I blamed myself, so it seemed a fitting punishment – running had gotten me into a situation where I had been raped, and then it had gotten me injured and almost kept me from continuing to pursue dance, so therefore it could no longer be a part of my life.

I graduated from college, moved to dance in San Francisco, and I still maintained the ban: running was not allowed. I’d like to say I wasn’t assaulted again, but like many survivors, I experienced repeated victimization at the hands of people I knew. Through reflection, good friends, and brief therapy, I found a way to enjoy in movement again, a way to love my body as a dancer. I began hiking in the Marin Headlands with a friend and alone – I wished I were running over the winding trails.

And then I left dance. Though it appeared sudden, it had been a gradually thinning relationship that ended in a performance of a work based partly on my assault – I was not doing what I needed to be doing. Freed from the reason for the ban, I started running again.

At first, it was in part based in fear – when you’ve dedicated your life and your identity to a particular physicality at an elite level, leaving it behind is like letting a part of yourself die – you know you will never quite get “it” back.

Gradually, the more I ran, the more I thought. Ever-longer runs lead me through my pain at leaving dance, and gave me space to process. And whenever runs got hard, I would remember my experiences being raped – the way it had torn my world apart and the way that I had made it through to the other side, the way I was still going forward and building my life – and I would dig deeper and find myself pushing up the hill.

I wish I could say that running was the cure – it was only part. As I started graduate school, I realized that every run was about being raped, that every race was a battle in my brain to use my previous pain to overcome my current physical discomfort as I pushed (and fell!) into trail running and trail half-marathons and relays. I started to dread those moments – and they were the only ones in which I was able to fully address an issue I still, really, had not effectively processed.

I finally began evidence-based therapy in the spring of 2017, seven years after my assault. Around the same time, I stopped wearing a watch while I ran, opting instead to listen to my body. Beginning with The Rattlesnake Ridge trail half marathon on my 27th birthday, I coined a running mantra: if you’re not having fun, change what you’re doing. I used it to monitor my experience: Was I pushing because I felt good? Was I enjoying the challenge? Did I need additional fuel to make it through and enjoy the next few miles? Did I feel like skipping over those rocks, or was I starting to get tired and need to be more cautious?

The more training runs and races I did with this in mind, the more beautiful running experiences I started to have. Each run, each race, became a chance not to be fitter, not to forget, not to escape, not to “not think,” not to process pain, but to be – to experience the wonder of being a human capable of moving through amazing spaces and ordinary ones.

That’s not to say there haven’t been moments of setbacks – rough races to push through, the every-day risk of harassment as a female runner. I’ve gotten better at ignoring the “gazers” and the “I probably shouldn’t say this, but you have great legs” from awkward men at the finish line. The hardest moments are the race-talkers. Men who, for whatever reason, decide that they need to talk – almost flirt – in the middle of a race, and stay suspiciously behind me in a way that makes me paranoid that they are staring at my butt every time we head up a hill, or the ones who lurk too close at the finish or start line and drag the conversation out for too long. They can get in my head, and awaken my vulnerabilities.

That’s where my mantra comes in handy – If I’m not having fun, change what I’m doing. If I feel good, I surge past the talkers – if I’m not, I walk to let them pass. If they’re standing too close and talking incessantly, I make up an excuse to leave and walk away. This is my run, my experience, and I am in charge of how I enjoy it.

Last summer, I ran my first marathon. Wise or not, I chose one that included 5700ft of gain and 6300ft of loss between 4500 and 8000ft above sea level (I live and train in Seattle…). It was the most breathtaking race I have ever run – and, as my first marathon, is not one I imagine topping until I run my first ultra. It was incredibly hard, particularly the “interminable ridge” from mile 10 – 19. When I started down the final descent, the chorus of Maroon V’s “New Love” started running through my head – “This is new love…would it kill you to forgive me?” – the same lines, on repeat, for the last 10k. I don’t believe in coincidences in situations like this, particularly in moments of exertion.  I was experiencing new love – love of running, the joy of skittering down that hill. It was the same elation my 10-year-old self had experienced after that first three-mile run. Could I forgive myself for all the joy I’d missed out on, all the blame I’d put on myself, all the ways I hadn’t listened to my body? Could I forgive myself, and just enjoy those last six miles and the beauty that surrounded me?

I decided I could – and I will keep making that decision to find joy every day, every run, every race, every time I encounter that person who interferes with my contentment.  Running is where it started, and running is where it remains – only now, it’s truly mine.

Virginia Reinert left professional contemporary dance in 2016, and went right back to the woods she’d played in as a kid – this time as a trail runner. She lives and runs near Seattle, Washington, and couldn’t imagine teaching middle school language arts & social studies without the joy of trail running to balance things out. She’s currently plotting her first ultra while not grading papers and reading too late at bedtime.
More From Virginia Reinert