Homepage / Community / Mountains of My Mind: Adventuring Through Life with a Traumatic Brain Injury

Mountains of My Mind: Adventuring Through Life with a Traumatic Brain Injury 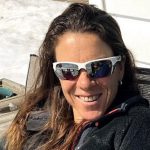 While working as a Health, Sport Science and Physical Education teacher in Bavaria, a sport accident changed Jill’s life in a fraction of a second. The wake of a traumatic brain injury left her severely visually impaired, with a life threatening eating disorder and days from death. After more than 2 years in hospitals spread over 3 countries, she is embracing the life she nearly lost running in mountains around the world.
More From Jill Wheatley 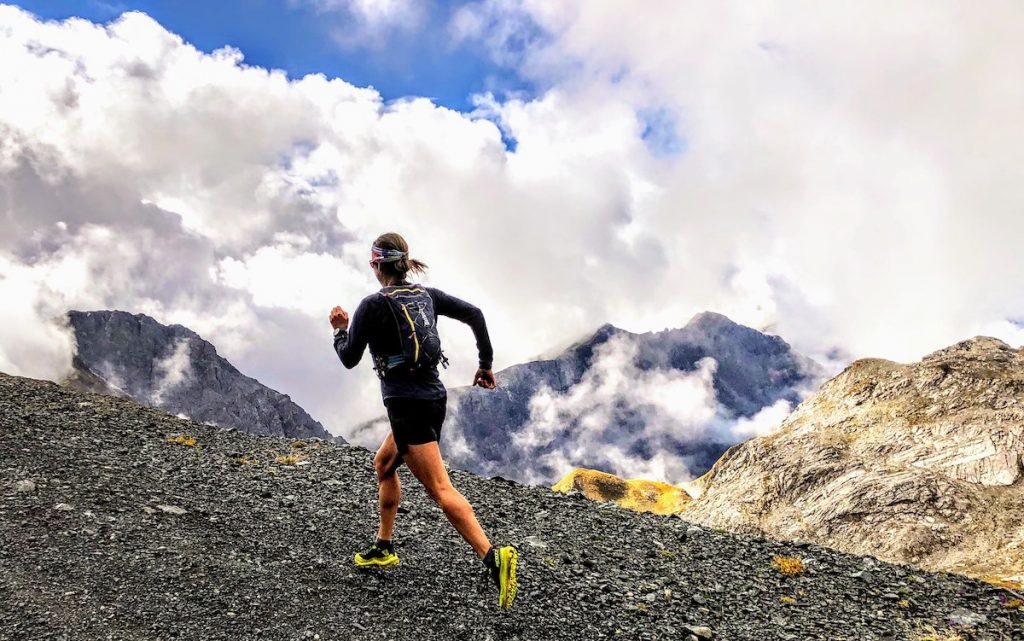 A storm of emotions raged as an explosion fired endlessly in my head. Dizzying thoughts, I vomited. Groggy, confused, alone, I vomited. Weak, unstable, torpid. Make the room stop spinning. Listless, agitated, nauseous. How did I get here? The Emergency Room doctor was an experienced professional.  Where was I supposed to find ice? I was a head trauma rookie yet deep within the chaos of the storm, I doubted his forecast. This was not a passing storm. This was not just a black eye and this was not just a headache.

Like a German eagle scouting the Bavarian farms that surrounded the playing field, I can precisely articulate every finite detail of the accident scene. The morning’s heavy, hovering clouds do not fog the impact, the collision of ball and skull. The storm set in. Nauseating hospital smells, confusing voices, piercing bright lights, race car ride, cyclone in my apartment, in, out, vomit, erupting, in, out, listless, vomit, crawl, out ….out ….out.

Bleeding and swelling, my brain lost its controlling power while I was alone on the farm attempting to nurse my black eye. Car, hospital, ambulance, questions, in, out, new hospital, more questions, more confusion. The intracranial pressure was limiting blood flow to my brain, depriving it of the oxygen required to function.  The oxygen necessary to make any sense of the storm. The storm I call Relentless spanned 7 hospitals, across 2 continents, and 3 countries.

A repetitive nightmare looped endlessly. One specialist after another, helicopters like boomerangs coming and going, medical monitors, monotonous vital checks, rickety meal carts, cleaning carriages, and chatty therapists giddy to practice their English all while the subtlest sound irritated. I craved silence. Never alone but lonely in my feelings, dark and foreboding.

A simple hard ball the catalyst sending life from full speed to a screeching halt. My spirit was crushed on impact. Physical or cognitive, the simplest tasks were painfully draining. Inconceivable. My self-control braking mechanism was rocked and I fell flat, extended episodes void of emotion in the storm.

Months on the Neurotrauma Unit therapies became as monotonous as headaches yet the state of my eyes, the state of my appetite and the state of my heart remain unchanged. Relentless squalls kept me down as the new calendar year began with subsequent neuroophthalmological examinations that ascertained I would spend the rest of my life with 70% vision loss. Total blind on the right and limited range of motion depth perception and focus of the left. Physically and emotionally scarred, my spirit flatlined. The storm destroyed my trail. I was dangerously lost.

Turbulent thoughts did not settle when I was transferred from a German Neurorehabilitation hospital to Canada. I have next to no recollection of the short time in my motherland. Too far beyond the available scope of care, I was transferred to more specialized care in Denver, Colorado. Equanimity was as foreign as the hospitals I was tossed between. The trail was dark. My only hope was that my trail would end.

Desolate, my spirit had no space for innovative technology or medication to keep my fire burning. If I were meant to survive the storm, I would have stoke enough to weather it alone. Endless months in hospitals all with views of Colorado’s Rocky mountains yet all I could see were blockades. Clouded by dark thoughts, I could not see myself perishing. No vision, no hope, no appetite, I withered.

As I paused and lifted my head from my journal on the second anniversary of my TBI something caught my left eye.  A shift of weather deep within. From a burrow beneath all of angst, a silent inner voice emerged, I could. After months of seeing no reason to live, a glimmer of light, the first sign of the storm beginning to calm. With a shift of mindset, when I caught a glimpse of the esoteric light, I began to imagine what the mountains could do. What felt to be an ending had potential to be a beginning, a pursuit of self-discovery, a quest for inner peace. Perspective can make challenges appear mountainous or possibilities look infinite. Impermanence revealed, I could finally see that the storm would calm. I could move mountains.

Following endless darkness, as the sun came up on an early December morning, I was dropped at Denver International Airport. With no recollection of arriving in a wheelchair 7 months earlier, the scene had all the makings of a new beginning. However the wake of my TBI created obstacles beyond the physical, psychological and emotional, with international insurance restrictions, revoked European residency, driver’s license and apartment, I did not have a country of legal residence, any housing arrangements or outpatient team to be discharged to the care of. It was up to me to create a vision, a trail ahead. What could I make of the storm’s onslaught?  How could befriend this stranger? How could I calm the mountains of my mind?

The storm left no direction yet all signs pointed to mountains. No mountain, no trail or climb could challenge me more than my traumatic brain injury.  Marrying my passion for the wonders of Mother Nature with hope to build my relationship with myself, I decided to break trail in mountains around the world. A global blueprint with the grand trail leading through 13 massifs during one trip around the sun was drafted. Bring on a year of new trails,  new chapters, new hope.

First runs were a collision between hopefulness and hopelessness, tears of frustration and tears of joy. My body had spent months on death’s doorstep yet I expected nothing less than fast, fluid strides. Though thankful for health enough to move on 2 feet, carrying a self-inflicted  expectation of perfection, I was fixated on fixing myself.

Endless months of therapies, I had become addicted to healing myself. It was as though I expected that one day I would be complete. Voices shouted as if their vibrations would fix all that was broken. If I could run faster, further, higher than I would be fixed.

It was months into mountains, serenity alone with Mother Nature that I discovered something was missing. I was missing the essential truth. I was good enough then and am good enough now. I am not broken, I do not need to be fixed, I am whole and complete exactly as I am. Having an odd number of eyes, a tapestry of scars, how far or how fast I run does not change who I am.

Running reveals emotions, allows me to look deep inside and learn about myself.  I have found myself crying, laughing, screaming and singing through trails. I no longer refer to my trail as that of recovery. I will never recover to who I was before the storm. I am here, I am now, present in every moment. Yesterday is history, tomorrow is not a guarantee.

The blueprint remains fluid. Year 2 is nearly complete. Chapters challenging the mountains of my mind have seen growth, strength, risks and courage I never could have imagined when deep in chapter Relentless Adversity. Serendipitous encounters in the Colorado outback, leeches and llamas, hugs when inner storms torrential, snowstorms and serpents, pneumonia among prayer flags, thumbs for rides, ventilators and Vipassana, from glaciers to campfires and connection in the Khumbu, new characters, new settings, tales of getting lost, tales of getting found, the trail I have blazed has led to finding strength that for so long I never believed existed.

From the Andorra Pyrenees where I began challenging the mountains of my mind, to the Swiss and French Alps, Italian Dolomites, Slovenia’s Julian Alps, India and Nepal Himalaya, from New Zealand through Patagonia and Peru’s Cordillera Blanca and Iceland, these feet have since ran me through rice paddies, awe-inspiring alpine meadows, high above tree lines, over glacial passes, around gorgeous gorges, through dark tunnels, and up steep scree cols.

With her dramatic beauty, Mother Nature radiates encouragement in alpenglow, whispers reminders of perspective. Her calm gently guides my trail. Running in mountains softens my reaction to adversity, provides perspective, enables me to face anxious thoughts and find gratitude for all the ways previous chapters have shaped me.

Crawling along washed out ridges in the Italian Dolomites, hanging on roots over gorges in Pyrenees’ downpour, weaving through Jujuy’s sweltering rock-stars and countless cacti, navigating Nepali erosion and missing signposts in Patagonia, sandwiched between beartracks and impassable snowpacks, when mountain running transforms into a game of survivor or slow-going slog, I tap into the moment, the strength and resilience I mustered to survive when given only given days to live.

When a trail littered with deep rocks plays havoc with my limited depth perception, a stone misjudged, a root disguised in a shadow, sunglasses broken, knees bloodied, battered and bruised, falls heighten lessons in mindfulness. Being completely present wherever I am, I embrace impermanence. The ups, the downs, the beautiful and the painful, the trail changes.

No World Cup or ginormous belt buckle to awe the masses, no frenzy of followers, or sponsors knocking, initial thoughts of blog publication were rocky. Letting go of the dangerous stories of unworthiness, with uncertainty, risk and emotional exposure, I embarked on publishing my innermost tales valiantly because allowing myself be seen carries potential to bring a mountain of hope to struggling souls. The power of human connection is profound. Vulnerability is the essence of connection and every human can personally connect to adversity. Being truthful in my struggles, courageous in my fears, I use my vulnerability as a trail to connect and encourage others out of internal storms onto their own trail full of self belief directed towards whatever it is that excites their heart.

When my heart senses a brewing storm and find myself grieving or struggling, simply changing the scenery does not change the internal weather. I can alleviate my own suffering by embracing the winds rather than fighting storms. Mindful running, not ruminating about the past or anxiously anticipating the future, simply being fully aware in the present moment puts every storm into perspective. There is no guaranteed forecast on this trail that is life.

Life is not about dwelling or craving change. I will embrace whatever the weather brings staying rooted in inner peace and compassion thankful for the lessons in strength a relentless storm has taught me.

While working as a Health, Sport Science and Physical Education teacher in Bavaria, a sport accident changed Jill’s life in a fraction of a second. The wake of a traumatic brain injury left her severely visually impaired, with a life threatening eating disorder and days from death. After more than 2 years in hospitals spread over 3 countries, she is embracing the life she nearly lost running in mountains around the world.
More From Jill Wheatley