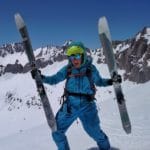 Kim resides in the Eastern Sierra (Bishop, CA). She is an avid mountain runner and backcountry skier. In the summer months you can find her running big Eastern Sierra passes in the southern Sierra and cutting off cross country to scramble up a mountain or two or more! In the snowy months you can either find her running the canyons in the desert ranges across the Owens Valley, peak skiing, or out on a multi day ski tour to peak ski mountains deeper in the Sierra. Formerly a PT by trade, multiple traumatic brain injuries halted that path and led Kim to forming a new identity based on a life of endurance in the mountains and full of adventure.
More From Kimberly Ann 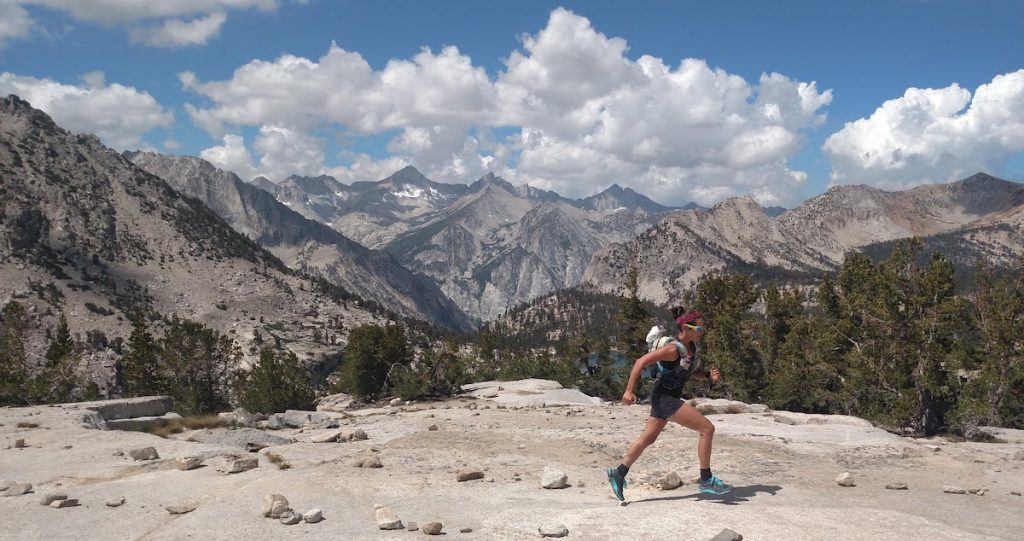 Scared beyond reason, I set out on a trail I’d trotted many times to start my trip. The plan was a solo, six day, 100-mile fastpack closely paralleling the crest of the highest part of the Sierra Nevada. It would unnecessarily summit 18 peaks, cross 15 passes, accumulate 45,000’ ascent, and be approximately 50% off trail because all that is what I enjoy most. However, I wouldn’t make it more than eight miles before turning around on day one.

The scale of the trip is not the challenge for me. The real challenge I faced on this trip was overcoming anxiety from going solo on a multi-day excursion. I have been clinically diagnosed with anxiety. It manifested from a traumatic brain injury I received from multiple falls learning to ski four years ago. In all my prior big trips, I’ve been with a partner I’m comfortable with. Company keeps my mind occupied. Otherwise, I default to perseverating on all that can go wrong. I’ve plenty of experience and know I’m capable of the route I planned, but that’s the nature of anxiety – it’s excessive fear that’s irrational in nature.

So there I was on day one eight miles out turning around. My injured brain typically functions best in the mountains, but no amount of stimulus-free solitude with expansive mountain views could calm it. In the following days I tried two more times, but anxiety kept getting the best of me. I was struggling to sleep the nights before each attempt. I was so anxious leading into this trip that I told my fiancé I was backing out before I’d even started! Something had to change. Part of my anxiety was based being less familiar with day one terrain and snow conditions. I decided to skip that part and try starting somewhere much more familiar. Perhaps starting in a familiar area with a calmer mindset would give me some momentum to get this trip going.

Taboose Pass is one of the four big Eastern Sierra passes with a trail that ascends over 6,000’ of unrelenting vertical out of the desert to provide access to the high Sierra. I train there regularly because I love the relief and there aren’t typically many people there. I’m comfortable there. I could intersect my planned day two route just a few miles after getting over the pass, so I made an alternative start using this pass. I started off at first light (6am), set a comfortable pace, and gained the pass within four hours. The familiar view of Arrow Peak (left) and the mountains of the Cirque Crest (right) greeted me at the pass and made me enthused to begin in earnest. The level of anxiety I’d felt on prior attempts was replaced by enthusiasm for the Sierra Nevada terrain I love so much!

Continuing forward, I descended into the basin to an intersection with the John Muir Trail (JMT) where I turned south and cruised along the JMT super highway to get to my first mountain objective, Mt. Wynne. This was also where I’d get to break away from the trail for awhile. The west ridge of Mt. Wynne provided a stable class two ascent to the 13,179’ summit, which awarded me with my first expansive view south to where I was headed. My next two peaks, Colosseum and Mt. Baxter, were clearly visible as well as Mt. Whitney (highest in the continental US) toward the end of my trip popped up far off in the distance.

The descent down the SE face of Wynne was tediously loose and scrambly, but I was soon down it and strolling through the basin toward the col between Colosseum Mountain and Cedric Wright. Snow complicating the passage up to the col had been one of the many things I was previously freaked out about, but what little snow was there turned out to be easily manageable; it was highly textured and low angle (good footing!). The terrain ahead was similar to what was behind. Up stable ground to summit Colosseum, another stellar view, down a loose chute, and across another lovely Sierra basin. At this point I’d covered 20 miles and 10.6k’ of uphill. The day was getting short. I might be able to make it over the next peak ahead, Mt. Baxter, but I thought it a better decision to make camp for the night rather than tempt descending Baxter in the dark.

Things weren’t totally stress free for me. Unknown snow conditions on the north side of many passes remained. Worry about managing the loose class three terrain going up Baxter as well as finding the correct descent gully was still there. The exposure along the summit ridge of Mt. Tyndall was still a concern. These were many of the same thoughts that were overwhelming me on prior starts. However, I found myself in a calmer head space and able to find strategies to temper anxiety. I realized that it helped me to focus only on the one concern that comes up next. As I came to each individual concern and got past it (e.g. snow at Colosseum col), I realized they were non-issues. Reflecting on this led me to realize that consciously thinking to myself not to turn around when overwhelmed with anxiety was beneficial. The combination of starting at a more familiar location and these strategies brought me the sort of peace and enjoyment I normally find in the mountains. With that sense of peace, I ended my first full day feeling fulfilled and at ease. I slept so well that night – far better than any of the nights before prior failed attempts!

Morning came and I set off up the west side of Baxter’s chossy north ridge. Shortly into the climb nature gifted me with a big surprise – a Sierra Bighorn Sheep sighting!!! I took numerous photos, but all the zoomed in ones are sadly too blurry to make worth including here. Sierra Bighorn are beautiful creatures with graceful strength in mountain terrain. Google “Sierra Bighorn Sheep” if you want to see a real mountain athlete. They’re unfortunately rare, so a sighting is a special thing. I watched them until they were gone. Filled with enthusiasm seeing one of my favorite animals, I wasn’t even phased by the loose class three terrain up high on Baxter that previously worried me. I continued up over the mountain, down another obnoxiously loose descent, and down the drainage below to link up with the JMT.

I took the JMT south through the ridiculously scenic Rae Lakes area. A peak called Painted Lady offers an excellent view of this area, so I climbed it! My next objective was Mt. Rixford directly to the south, but there was far too much snow on it to do safely in runners. I hopped back on the JMT and took it south over Glen Pass instead. I planned one food resupply into the trip so I could go lighter and cover ground. That resupply was to the east over Kearsarge Pass at the Onion Valley trailhead, so that’s the direction I headed. For some reason, I didn’t get a photo of the outstanding view to the south along this section. The trail running potential is simply too beautiful to not show, so I dug up an old photo from a run back there my fiancé and I did last year.

My trip unexpectedly ended a mile away from the trailhead. It was dusk, and I was close to the trailhead, so I avoided pulling out my headlamp for the last 15 minutes of trail. In the dimming light, I tripped on a rock and broke my fifth metacarpal (my hand) trying to catch myself! I’d never broken a bone before, but I undoubtedly knew it was broke – I heard it break and the feeling was unmistakable. Fortunately, my fiancé was at the trailhead to get me to the ER!

One thing I’ve learned from coping with my brain injury is to accept the things I can not change. I have accepted that I might not heal up in time to complete my trip this season, but I am still profoundly disappointed. I had settled into the trip and was ready to complete a big Sierra crossing by myself. If I do heal up before the days are too short, nights are too cold, and the mountains are accumulating snow, I’ll be right back out there where I left off to complete my trip! However, challenging my anxiety and overcoming it was the fundamental goal of this trip. After a rocky start, I got to a point where I was comfortable, happy and quite ready to continue to the end. In this regard, my trip was a real success.

If any other ladies out there struggle with anxiety like me, here’s the summary of what helped me:

Lastly, I’ll express my sincere gratitude to Trail Sisters, Merrell, and particularly the lady behind Trail Sisters who works to empower other women – Gina! Hopefully my mountain adventure from a quiet corner of the Sierra helps further the cause and inspire other women to get out there!

Kim resides in the Eastern Sierra (Bishop, CA). She is an avid mountain runner and backcountry skier. In the summer months you can find her running big Eastern Sierra passes in the southern Sierra and cutting off cross country to scramble up a mountain or two or more! In the snowy months you can either find her running the canyons in the desert ranges across the Owens Valley, peak skiing, or out on a multi day ski tour to peak ski mountains deeper in the Sierra. Formerly a PT by trade, multiple traumatic brain injuries halted that path and led Kim to forming a new identity based on a life of endurance in the mountains and full of adventure.
More From Kimberly Ann