Determination and the Arizona Trail FKT 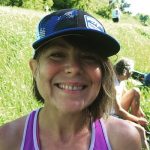 Helen is Greek British, lives in Flagstaff, Arizona and is an ultra runner. She only started running at the age of 39, discovering her passion for the outdoors late in life after she left the Corporate World of 22 years to pursue a journey of self discovery. Helen recently set the Women’s record for the (supported) Fastest Known Time on the 800 mile Arizona Trail.
More From Helen Galerakis 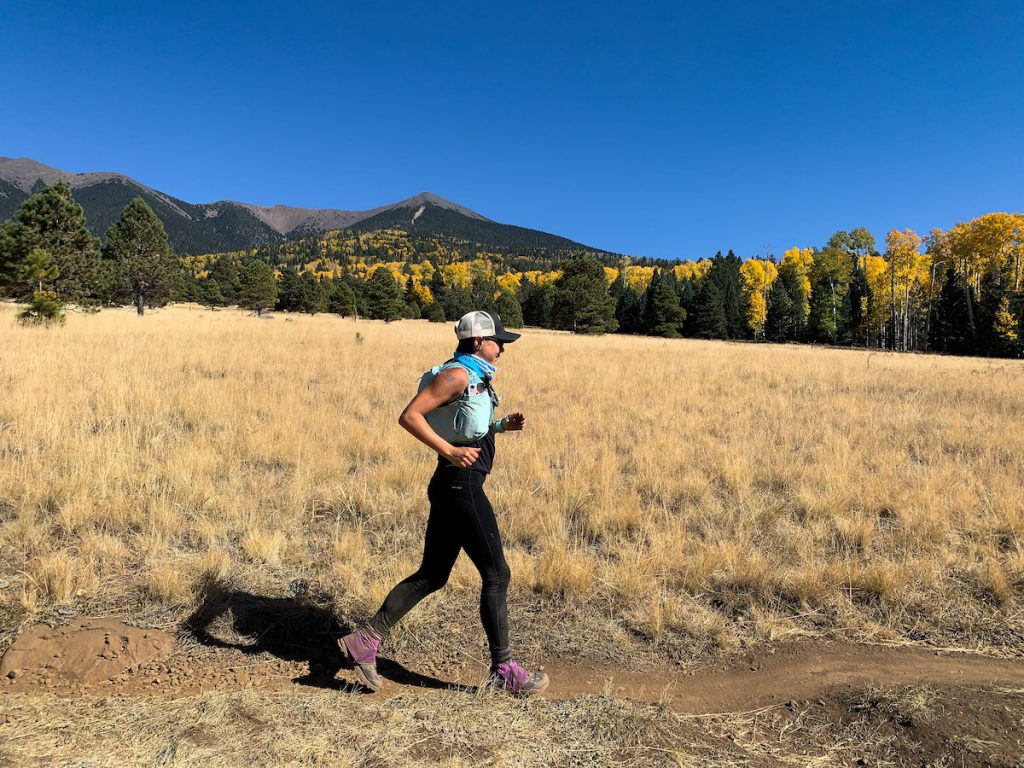 I’m on the Hi-line trail, an oasis high up in the middle of the mountain, surrounded by red rock. I had just hiked through a wonderland, someplace you would find only in your imagination, a magical place. I was on day seven of my Arizona Trail adventure and things were most definitely not going to plan (the night before I was running for my life through a prescribed burned area thinking I was going to die a fiery death!). Still, I couldn’t help but smile. The sun was shining and I was surrounded by Mother Nature’s glory.

I had set out to achieve the overall supported Fastest Known Time (FKT) on the 800-mile Arizona Trail with it’s 110,000ft of gain and loss. At the time the overall FKT was 15 days, 13 hours and 10 minutes. I had only started running four years previously at the age of 39 after quitting the corporate world of 22 years, and trail and ultra running two and a half years ago. This was set to my biggest challenge yet.

Rewind six days, I suddenly developed excruciating pain in my left knee whereby it pulled me up short and I couldn’t run on it for any long periods of time. Most of my rim-to-rim down in the Grand Canyon was fast hiking. This was only day two and 65 miles into my 800 miles journey. Day three I couldn’t run at all. Day four I could shuffle for short bursts and this has been the way of it up to and including today, day seven. I couldn’t bend my knee, so any small rock on the trail was a challenge to overcome. If any of you are familiar with the Arizona Trail you’ll know that very little of it is smooth going!

I was determined to keep up with my mileage, so this meant I had yet to finish a day in the sunlight despite starting at 4 am each morning. It also meant that sweet rolling trails were like torture, glinting at me with their seductive promise of running when all I could do was a hop, skip and a shuffle longing to be able to run, to lose myself in its fluidity but instead was gritting my teeth with the pain, watching the hours tick by as I gamely continued putting one foot in front of the other. With every passing hour, all I could think about was the sleep I would be losing with every footstep. The nighttime hours felt like I was on a treadmill, the trails seemed endless and repetitive with no sense of perspective, not being able to see far ahead in the pitch black, only the immediate illumination of my night lights.

It was my pacers that I felt sorry for, out with me for many more hours than they had signed up for or expected. Not one uttered a word of complaint though, only encouragement and smiles expressing their gratitude to be part of my journey.

So, where were we? Oh yes on the Hi-line trail, day seven, 300 miles in. I have to also mention that at this point I spent months planning this; the route, access points, maps, terrain, gear required, mileage breakdown, food, etc. Knowing that once we got started I would be in no fit state to be in control, I needed a crew chief that I could hand over all this information to and be free to do what I needed to do, which was run, safe in the knowledge that I had someone in charge who knew what the score was. As it was I couldn’t find a single someone that was able to take two weeks off work, but I found the next best thing, which was a group of four very capable people who had bravely accepted the responsibility (although please note that up until the night before I started I still had 1 chief missing!)

Unfortunately, due to illness, other commitments and various mishaps, these four actually turned into nine different chiefs, of which five hadn’t been briefed properly due to being last minute stand-ins (but thank goodness they stepped up) which ultimately resulted in a few comedy of errors, which looking back now helped me shift perspective, roll with the punches, focus on what was really important and to have fun out there bathing in the love and friendship of those who were supporting me.

Oh yes, so I’m up there on this trail, I’ve been struggling for seven days, I’m dog tired, I have had chief stand-ins for the last three days, I was spending too long at crew stops and my knee was still hurting. BUT I was still moving, I hadn’t missed any miles and I was still on plan, JUST. My coach wanted to speak to me, my current crew chief who has zero running or ultra experience was very anxious. I just kept on moving, eye on the prize.

Miraculously I had cell service so I called my coach. He says we are worried about you. Your knee hasn’t fixed itself; you could be causing it long-term damage. You’ve been spending much longer hours out there on the trail than you had planned and you’re not sleeping. It doesn’t look like you’re going to make the FKT, maybe you should consider stopping? If I said I was flabbergasted it would be an understatement. WTF???!!! Where was this coming from? It had taken all my strength up to this point to keep moving forward, to not let the demons win. I was like, heeeeeell, no! Are you kidding me? Even if I have to drag myself to that finish line I am determined to make it. Unless I drop down and die, then ok I might allow that as an excuse. But really that would be the only reason I could think of that would justify me not finishing.

I calmly explained that I was still hitting my planned mileage and my knee may fix itself yet. He said ok, but at least think about what might happen if you don’t hit the 15 days, you’ll have to come up with a new plan. It was a shift in my mindset that was worth taking into account, but for me, it wasn’t about the planning or re-planning, it was the shift to take a breath and to figure out what was really important here, what was my motivation and ultimate goal. When it came down to it, the overall FKT wasn’t the be-all and end-all for me. This was something to aim for and something to plan around. Finishing it was my number one priority, savoring the experience, having fun (yes to most of you this would probably be type 3 fun!) and celebrating with my support team (of whom ultimately I had 40 members throughout the 800 miles).

So I hung up letting go of being shitty with my support team trying to save minutes to achieve the overall FKT in favor of celebrating their love and support and feeling grateful to have these people in my life who were helping me achieve this HUGE thing. I also came away, thinking F**K YOU, not finish?? I don’t think so buster, and you’d better believe it I’m getting to the end of this trail, no matter what.

The overarching theme? DETERMINATION. GRIT. PASSION. Without these, I could have given up on numerous occasions and no one would have thought any less of me. But the thing is, I didn’t want to give up. I wasn’t looking for a get out of jail free card. I wanted to succeed and ultimately this is what got me through to the end. This and the love and support of my people. Even with hour after hour the demons in my head telling me “You’re so slow,” “You’re so tired”, “You’re never going to make it,” I was able to knock them right out with “I’m doing great,” “Just keep moving,” “Take each step.” Of course this meant I had no peace the entire 17 days, the mental fortitude required to stay strong and keep positive was relentless. I wasn’t even getting any decent amount of sleep with which to restore my levels. It was draining. Normally trail running for me brings peace. It is my meditation time, where I reach decisions from my subconscious, I spark ideas, I find calm. This was the polar opposite. Every day for 20 hours each day, my mind was working hard to keep me focused, to achieve my goal. My body was on autopilot and to be honest, physical capabilities were the least of it. It was all a mental game when you came down to it.

I made it in 17 days, 11 hours and 3 minutes setting the women’s supported record for the Fastest Known Time. I slept for four days straight afterward and three months later I am still on the road to recovery, mentally but that’s a story for another day!

Helen is Greek British, lives in Flagstaff, Arizona and is an ultra runner. She only started running at the age of 39, discovering her passion for the outdoors late in life after she left the Corporate World of 22 years to pursue a journey of self discovery. Helen recently set the Women’s record for the (supported) Fastest Known Time on the 800 mile Arizona Trail.
More From Helen Galerakis