Homepage / Community / Ending the War on My Body

Ending the War on My Body 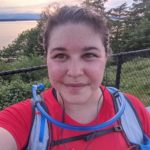 Michelle is a long-time hiker and outdoorswoman based out of Seattle, Washington and is new to the sport of trail running. She has mostly created her own type 2 fun with long bike rides and is looking forward to a new challenge. When she’s not cycling or exploring new trails, she’s a nurse-midwife, mom, baker, knitter, and rabble-rouser. She also writes about feminism, health, and midwifery at Sage Femme: Adventures of a Radical Midwife .
More From Michelle Farber 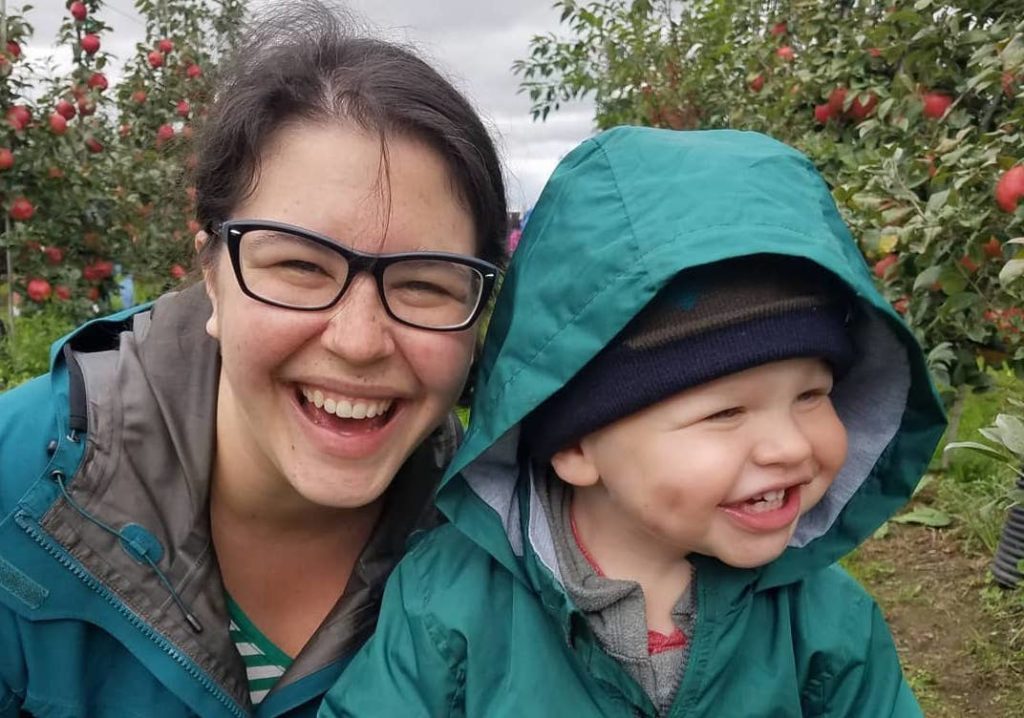 I flipped my biometrics sheet over on my desk and quickly looked around at my classmates to see if anyone had seen the number on my form. I was taking part in the hellish rite of the Presidential Fitness Challenge for the first time as a fifth-grader. It was also the first time I felt shame about my body and my weight. We had all just been weighed and as a competitive gymnast, muscular, and built like a small fireplug, I weighed much more than most of the girls in my class.

I spent much of middle school and high school obsessed about what I ate; making sure to always ask for dressing on the side, no cheese, counting calories, and had several stints of using my mother’s Weight Watchers guides to try to lose weight. I used exercise to punish my body. I would spend hours telling myself I had been “bad” that day if I had eaten an extra sliver of cake, or heaven forbid, felt full after eating.

I have always been an athlete, but through all my training had never been given any guidance on how to fuel my body effectively, the importance of balancing fats, proteins and carbs, and how to have a healthy outlook on food, and by extension, my own body.

I spent over a decade away from running after several nasty bouts with piriformis syndrome which acted up as fire shooting down my right leg the day after every run. I had moved to endurance cycling, a sport much less punishing to my bad hip. I had found joy on my bike, rode all over the northwest, climbed several mountain passes, and even dabbled in cyclocross (literally the dumbest and most ridiculously fun thing you can do on a bike). I had left the world of running far behind me and hadn’t given it much of a second thought, mostly because every time I had a little hope that I could return, my injured hip sunk my dreams again.

My introduction to trail running was wild and intense. Before crewing a runner through the Cascade Crest Classic, a 100 mile race in the Central Cascades of Washington state, I didn’t even know people RAN on trails. I watched this completely unimaginable feat and felt awe at the commitment to endurance. I have a deep respect for those who chose to weather physical discomfort and sleep deprivation, something I marginally understood as a relatively new distance cyclist.

While one of my main feelings was awe (and a little, “woah, these people are even nuttier than me”) a familiar feeling was creeping back. I looked around at the female athletes and was surrounded by tall, muscular Amazons. Not just thin, but every muscle etched, sculpted, perfect.

As a mom to a three year old, my body had been through immense change through pregnancy, birth, and two years of breastfeeding. While I am strong and healthy, I’m still about 15 pounds heavier than my pre-pregnancy weight, and had mostly accepted that my body was just always going to be different now. I had actually felt most at home in my body while nursing. My body was doing literal alchemy to turn my blood and food into the perfect sustenance for my baby. I had returned to a demanding and stressful career as a nurse-midwife, was biking my ass off, and was slowly but surely getting to the place of not only acceptance of my body, but loving what it could help me achieve–even if there were parts that were saggier and squishier than before.

Being at the race that weekend undid years of work of body acceptance and love. I’m not sure if it was the sleep deprivation, eating like garbage while chasing a runner around the mountains, or the combination of it all, but I left that race feeling like my body was ugly, big, soft, and weak. I worked hard to shrug off the feelings of inadequacy and self-loathing but that weekend left a large chink in my armor.

This isn’t my world, I thought to myself. People with bodies like yours don’t belong in trail running. You’re not an athlete. I was unkind to myself in those weeks following Cascade Crest.  But the truth was I loved the race. Did I want to do a 100 miler? Hell no, but seeing a different kind of endurance sport, one that was in the mountains, one that posed so many unique challenges to mind and body was intriguing.

I volunteered at the Teanaway Country 100 about a month later, hoping that I would have less of a strong reaction to seeing bodies that look so different than mine. I also hoped that knowing I might feel this way at least it wouldn’t be a surprise.

Unfortunately, it was worse. The minute we set up at the aid station we were given our volunteer t-shirts. Usually a small to medium t-shirt size, I pulled on the medium and felt it stretch just barely over my breasts, hug my abdomen in a way that exposed all the little rolls, and immediately I wanted out. I wanted out of the shirt. I wanted out of my body. I wanted out of the feeling of having the frumpy “mom-bod.” I choked back tears and pulled my fleece over my t-shirt even though it was far too warm.

One of the other volunteers, bless her, looked at her shirt, a size larger than mine, and brashly asked, “Hon, you want my shirt? What is it with these things? They are SO SMALL.”  I felt instant relief at having a shirt that fit at least a little bit, but the tone was set for how I would feel about my body the rest of my volunteer stint. My body didn’t belong in these spaces.

After these two disasters, I was talking to some new friends over drinks about how I’d felt at both races. Both of these women, long established in the ultrarunning community expressed that they often felt similarly about their own bodies. Every single woman I have ever talked with about body image, shame, and disordered eating relays that they have, generally, felt similarly at some point in their lives. It is a devastating fact that so much of our brainpower and energy is taken up by hating our own bodies; bodies that help us explore the mountains, hug our children and quite literally bring new life into the world.

I had resigned myself to the fact that although I was interested in trail running, I would stay in my lane and continue to compete only in the cycling world. It wasn’t until I watched Matt Cecil’s beautiful short film, Human Powered, about the Finlayson Arm races in British Columbia, that I thought to myself, “Hey, I think I might actually want to DO this. In fact, I think I AM nutty enough to do this!”

I bought my first pair of trail shoes and headed out to Discovery Park in my hometown of Seattle. I took several very slow, gingerly-paced runs and waited. I waited for the hip pain and the fire shooting down my leg to return. It didn’t. I stuck mostly to trails around the city but kept coming back to one section of Discovery Park. There’s an area of old forest so dense you forget you’re actually in the city. The trail comes down just enough to give you some speed for the short, punchy climb that comes immediately after the downhill at a nice clip. I felt something fire within me.

I signed up for my first 25k and started training. Most of those plans were derailed by the current public health crisis, but I wanted to keep running. I branched out to road running for days where I couldn’t get out to the trails. I started running longer, following a training plan, careful (but sometimes not careful enough) not to increase my mileage too fast. I also found that I began battling a familiar, nagging voice. “Hopefully you’ll lose some weight now that you’re running,” the old darkness whispered to me.

I recognized the voice immediately and did my best to walk it back. Sticky notes and decorated sheets of printer paper with body-positive mantras have littered my mirrors and doorways since college. It was time to put more up. I hung one on my bathroom mirror that reminds me “Your body is strong and healthy,” another by my front door where my bike hangs: “Biking and running help your body feel its strength.”

These daily reminders hang above my shoe rack, now crowded with more types of running shoes than I ever thought I’d need. I repeat these phrases as I pull on my helmet each morning or before lacing up my sneakers before a run. They may seem trivial, but we have to keep reminding ourselves of things we want to believe thousands of times before we actually believe them.

My first trail season has had a giant wrench thrown into it but luckily the mountains will be there for far longer than I could possibly run in them. Like so many of my friends, we’re staying local for now, and dabbling in virtual races. This past weekend I completed a “Social Distance” Half-Marathon, a first for me. I learned a ton of lessons about pacing and nutrition; very complex stuff like, “don’t run too fast at the start” and “eat early and often.”

Even though my last few miles felt like a whole race unto themselves, seeing my three year old light up and sprint towards me as I crossed his path to my homemade finish line made the nausea and mental battles worth it. He hugged me tight and yelled almost incomprehensible things in his little toddler voice as I finished, his wide smile reflected in my own. Confronting low self-esteem and body image issues is a constant battle, and one too many of us engage in. Seeing the comfort and feeling of safety and security my body brings my son helps me want to end the war I’ve been waging against this glorious machine and celebrate all the things it helps me do. To him, my body was and is home, is strong, and “runs reawwwwy reawwwy far.”

Michelle is a long-time hiker and outdoorswoman based out of Seattle, Washington and is new to the sport of trail running. She has mostly created her own type 2 fun with long bike rides and is looking forward to a new challenge. When she’s not cycling or exploring new trails, she’s a nurse-midwife, mom, baker, knitter, and rabble-rouser. She also writes about feminism, health, and midwifery at Sage Femme: Adventures of a Radical Midwife .
More From Michelle Farber