Homepage / Community / Go Do a Lap

Go Do a Lap 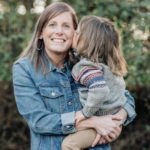 Heidi Shaw is a trail running mother of one who enjoys living with her husband and son in Athens, Ohio. She is a licensed school nurse who loves working in school health and dressing in vegetable costumes as often as she can. She thanks her Mom tribe and husband for consistently peer pressuring her into further distance races. She loves to travel and find new trails that she can explore with her family.
More From Heidi Shaw 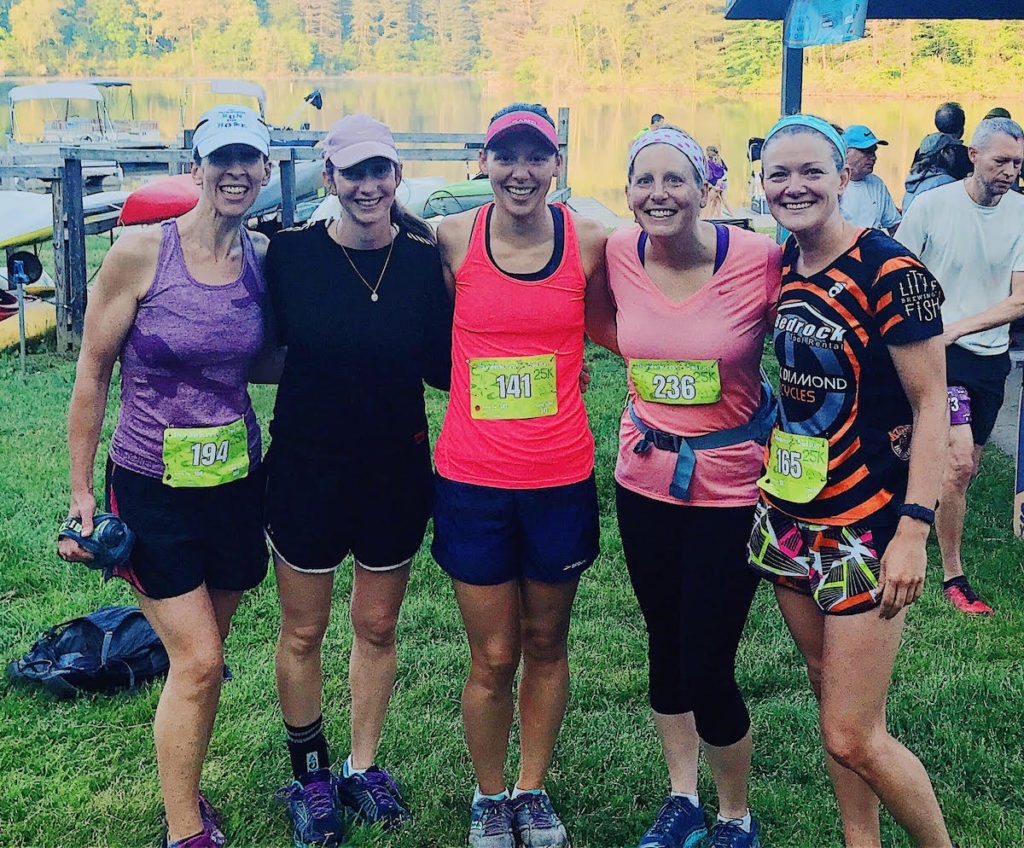 Nothing has ever sounded harder to accomplish than my Mom’s push of going outside and doing a lap around our pond. Barely 0.30 miles with a slight incline, I had done this a million times before, including in a billowy wedding dress in 95 degree heat, yet this well-intentioned suggestion felt like she was trying to kill me. But she’s my Mom and I didn’t have the energy to argue, so I put on my shoes and did a lap.

I was in the darkness of postpartum depression and anxiety, and as a new mom, I knew something wasn’t right but I couldn’t place what. It just didn’t feel “right.” But the guilt that this confusion was causing was constant. As the days slowed to hours then to minutes then to seconds without relief from my never-ending cycle of thoughts I couldn’t shut off, that’s when I started breaking. When the hell would my life turn into a diaper commercial full of magical moments of smiles and coo’ing instead of a constant feeling of inadequacy?

It wasn’t until I told a friend what I was feeling that I heard myself. Once I finally verbalized my feelings and started talking, the people around me could place their own uneasiness as well. My team, which consisted of my husband, family, and a few close friends helped me get to my doctor and then helped me to explain what had been happening and how “not okay” I really was.

With the help of medication and therapy, I was able to continue my laps and even found myself venturing out for ones beyond my pond.

To keep myself motivated, I wanted to splurge on a pair of running shoes from an actual running store, not the clearance bin of a sporting goods store like I normally did. Even just going into the running store was an accomplishment. I ran in high school and then for fun after college, but is that enough to call myself a runner? Surely, they could tell when I walked in carrying my baby weight that I didn’t fit in. What if I said something stupid? What if they ask me about races? Do they casually talk about pace? The list of ways I could make myself look like an idiot seemed endless but I pushed myself into the store and even onto the treadmill for the free gait study to get the right pair of shoes. Then I received one of the kindest compliments of my entire life, “you have a great stride.” It was like he called me Flo-Jo. I felt incredible.

I never liked running with people, unless it was my sister, but now that I was Flo-Jo, I felt like I could accept an invitation from one of my best friends who had finally become a runner after years of only being a cyclist. So we started running, then she invited another friend. That took another internal pep talk, and even an anxiety spiral ride that I took my husband on with me, but he pushed me out the door and promised me Mexican food after the run so I had to go. I wanted that queso. The other friend was also a mom, so we spent this run talking mostly about kids and husbands. Add in two more moms, and the tribe was complete, the dynamic 5 BRF’s (best running friends) had found each other. Now, not only was I out exercising, which was the only thing I didn’t feel guilty leaving my baby to do, but I was also getting sage advice from seasoned moms. Double bonus.

And then it took a turn. “Friend-therapy” as we called our runs, turned into goal-setting one day when we talked about doing a local trail race that was months away. I had settled on doing the 12K and felt like that would be a struggle but I could do it, yet somehow my BRF’s convinced me that the 25K was more our speed. My husband agreed, and somehow I found myself giving my credit card number in hopes that it would be rejected. It wasn’t. And now I was signed up.

The night before the race I could barely sleep and was so terrified, I sent a group text to my girls that said something like, “I’m taking my headphones. I don’t want to slow anyone down. You guys are faster. I’ll be fine, just run your own race.” It probably had 500 more words but this was the overall intent. ‘I’ll be slow, go ahead of me.’ What I didn’t know is that they knew how big this was for me and they had already sent a separate group text to say that we were all going together, no drops.

For me, this race was both a physical test but also a mental one. It was a year + one day since I had my son and had gone through the hardest time in my life. I felt, “if I can do this, then I’m on the other side.” So we did it. I wore a waist belt that jiggled its way up to my sports bra the entire time, and I bonked so hard on the last 3 miles that I had to walk a lot, but we did it. I realized about two miles in that I couldn’t shake my friends, they were not taking no for an answer, so I settled into a nice pace and let them tell stories and we laughed so hard that I still think about some of those stories every time I’m on those trails. And when we came around the last corner, our beloved 5th mom joined us, even though she had recently sprained her ankle so it took her out of the full 25K. So we ran it in together, all of us with each other, the 5 BRF’s. My tribe of moms who got me through one of the hardest years of my life, and my husband holding our wild child in his arms because he was already running at this point (yes, less than a year old), and my parents standing there cheering. It’s one of the best moments of my life. All my people, all together, all happy.

I was out the other side, and it was a freaking rainbow.

Heidi Shaw is a trail running mother of one who enjoys living with her husband and son in Athens, Ohio. She is a licensed school nurse who loves working in school health and dressing in vegetable costumes as often as she can. She thanks her Mom tribe and husband for consistently peer pressuring her into further distance races. She loves to travel and find new trails that she can explore with her family.
More From Heidi Shaw