Animal Tracks and Learning Their Marks 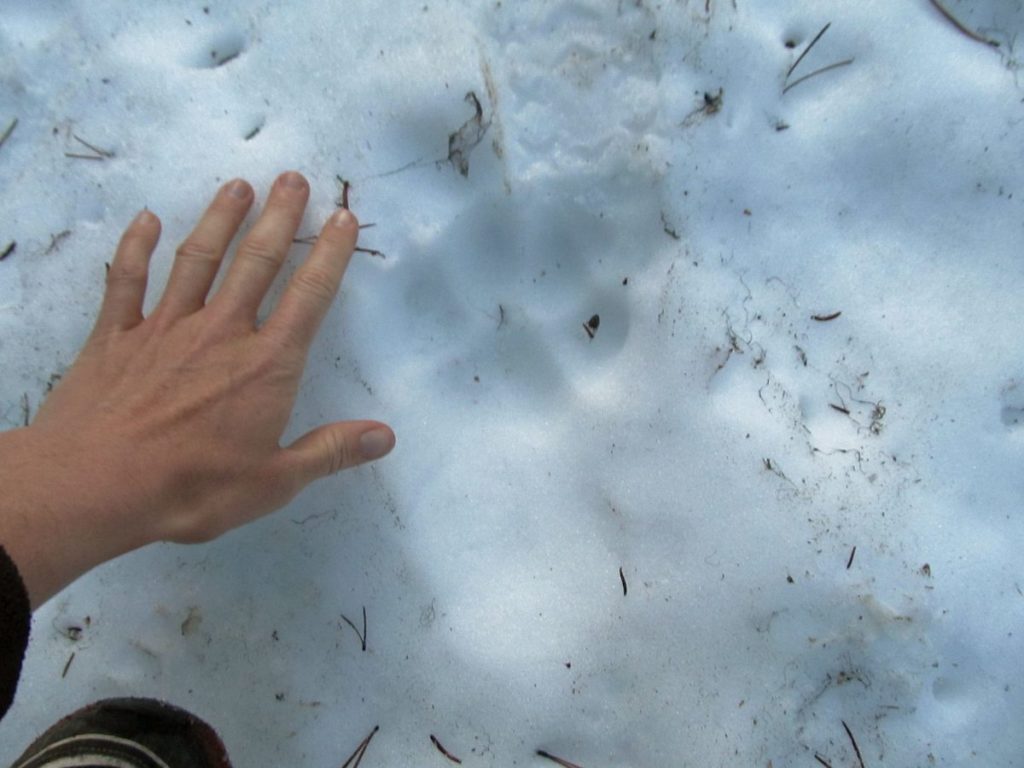 One of my favorite things to do when running or hiking in winter is to look for animal tracks in the snow. It’s amazing how this layer of fluffy white stuff can reveal the activities going on every day, unseen, in the forest. I often pause to study certain tracks and trails and take pictures of the ones I don’t recognize to look up later. I especially enjoy areas I call interstates where many tracks of many species crisscross and intermingle.

In my local woods on my running route, I’ve found porcupine, squirrel, mouse, bear, turkey, bobcat, raccoon, coyote, fox, rabbit, deer and many more tracks in the snow. Compare that with the fact that the only animals I’ve seen while running there are deer, turkey, and squirrels. The forest is a busy place! Those who track regularly in an area can even begin to distinguish between individuals by nuances in the tracks and other signs left behind.

While seeing tracks in the snow or mud can provide an interesting way to catalogue the occupants of an area, they can also provide you with information on behavior. Animals are not out for a walk like we are. They are going somewhere. Whether it’s to food, shelter, water, or a mating area, the tracks always lead somewhere. I’ve followed animal tracks to find water in the desert on several occasions.

Keeping this in mind when you’re out hiking or running may help you find water when you need it, but can also keep you safer when camping. Well-trodden animal trails, also known as game trails, are created by frequent use. This means that animals travel this way often (usually to water). Camping near these trails is not only disruptive to the animals that use them, but can also lead to conflict with either the animals that made the trails…or the ones hunting them.

You may not notice animal tracks or trails in an area, but you might see a different sign of animals that frequent the area. Scat, or droppings, are also giveaways that an animal has spent some time there. Learning the basic shape and composition of scat can help you identify who has been to an area just as knowing their footprints can. Scat identification knowledge is often more useful than tracks since it doesn’t require a soft medium to leave an impression.

Another sign that an animal spends a good deal of time in an area is flattened or scraped vegetation. This is especially common with deer and other ungulates. In areas frequented by deer you will typically find areas of tall grass that are flattened down in small pockets together. This is a clear sign that deer spent time resting there. In the desert or the alpine, you can often find scraped circular areas in scrubby vegetation where antelope or mountain goats (respectively) sleep. These beds can seem like an inviting place to spend the night, but keep in mind that even if you aren’t bothered by their creators, you may have other unexpected guests. Ticks are often found in these beds and along game trails, looking for an easy meal.

Scanning areas where you intend to camp for tracks, trails, scat, and other signs can go a long way toward ensuring a restful night.

Other signs of animals in an area can be seen by close observation of the ground and vegetation where you are traveling. Signs include things such as rubbing or scraping on trees or the ground, or fur snagged on bushes among other things. When climbing mountains in the North Cascades I frequently find tufts of ivory mountain goat hair snagged on bushes. During rut, male deer will scrape the velvet off of their antlers on trees as well as mark the rub with their facial secretions.

Many animals will mark their territorial boundaries. Some, like ungulates will scrape up the ground. Others may pile sticks, twigs, dirt, or other debris into piles. Knowing how certain animals mark their territory can help you avoid an unnecessary conflict of trespass.

There are many other signs that can be used to identify local inhabitants. Some of them are as follows. Snake skins are often found snagged on rough surfaces or rocks that were used to expedite the shed. Pyramidal stumps surrounded by wood chips are a sure sign that beavers inhabit the local waterways. In springtime, bears often scratch tree bark to release and eat the newly flowing sap. Small piles of drying grass in a boulder field could indicate that a pika is preparing for winter.

Maintaining an observational eye while traveling through the backcountry can reveal a lot about the overall health and diversity of an ecosystem. The more you learn to identify, the more you’ll likely observe. Even if you do not know many “animal tracks,” looking for other clues in the environment around you on your next trip can still allow you to follow along with what is happening.