My Dog the Running Coach 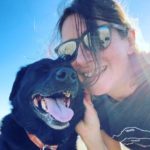 Anastasia grew up in the Midwest, went to school in the Northeast and Southern California, and is now a 100% committed fan of the Pacific Northwest. She works as a policy analyst, mostly to fund a steady stream of new trail shoes and trips to races held in beautiful locations. She believes that every body is a runner’s body, and hopes that continuing to run and race through her 50s can help others to see themselves as part of the sport. She is an advocate for mindful movement and relentless kindness on the trails. When she isn’t running, she’s probably backpacking, stand-up paddle boarding, hiking, teaching yoga, dreaming of donuts, and washing trail dust off the dog.
More From Anastasia Christman 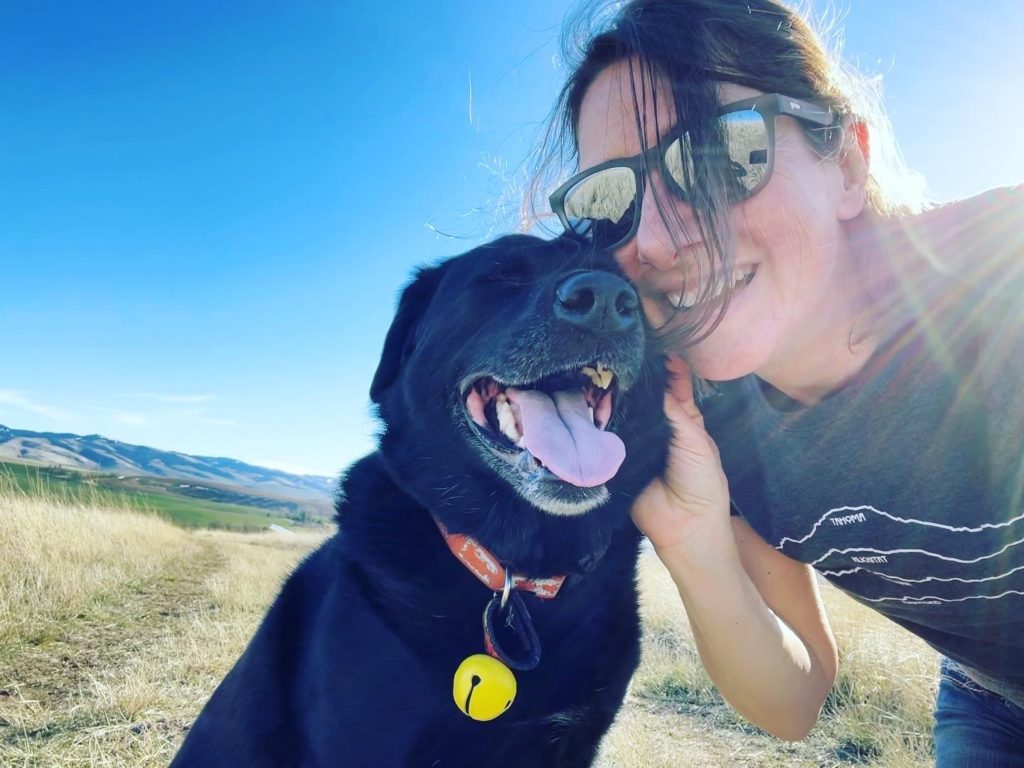 Sometimes a running coach is a former Olympian or pro runner. Sometimes it’s an expert with a deep understanding of physiology, or one who has mastered the art of the periodized training plan. Or maybe that coach is covered with muddy fur with her tongue lolling out of her mouth, proudly carrying a filthy old animal femur in her mouth and letting you know with every ounce of her body that this run is the BEST THING EVER.

I came to running a little late in life. So maybe I was just trying to make up for lost time with my single-minded focus on getting ever faster. I stood in the massive crowd for my first 5k unsure whether I could even finish, but I came across the finish half an hour later and became enthralled by the shiny object that they called the “PR.” Indeed, virtually every run after that became about pushing that personal record ever further; at least until I learned about the “BQ,” and then I was off and chasing that Boston Qualifier.

Eventually I did run Boston (with Los Angeles, Las Vegas, Portland, Marine Corps, Missoula, Cleveland, Chicago, New York City and a few others along the way) and I kept trying to push the pace. Shave a few minutes here, knock a couple of seconds per mile off there; maybe then I’d be a real runner. With music blaring in my ears and eyes locked straight ahead I covered as much ground as quickly as I could until I heard the crowds at the end.

But I wasn’t necessarily having a lot of fun.

I was kind and generous when it came to other people’s running—”Good job! You’ve got this! You look amazing!”—and I combined running and volunteering with groups like the Los Angeles Running Club, Girls on the Run and Back on My Feet where I saw firsthand how running side-by-side can close barriers of race, age, gender, socio-economic status, and life experience. But when it came to my own running, I was a drill sergeant:  “Pick up the pace. You’re faster than this.” Sometimes just moving my body wasn’t productive enough, I had to be multitasking on my feet so I’d listen to podcasts proud that I wasn’t wasting time. Running had gone beyond what I did to being who I was, and I was often pretty stressed out.

And then Piper came along. Supposedly, Piper is a mix of Labrador and Border Collie. She doesn’t like to swim, or fetch, or lay on your lap on the couch giving the big sloppy kisses of a Lab. Nor does she like to follow complicated commands and zip through agility courses like a disciplined Border Collie. So much for that pedigree.

What this dog does like to do, is go running. When we first started she would nip at my elbows, trying to keep me moving forward in a straight line, and over our six years together, she’s developed into quite a coach. Her coaching style is pretty simple, just half a dozen basic rules.

Mix it up: “Snow zoomies! Ohmygod it’s a BUNNY! Hey what’s in that tall grass? What’s by that tree? What about that other tree?” Piper is less concerned with pace than with fun, and while I’m not sure she could spell “fartlek” she is speed play embodied. She may eventually settle down into a steady trot, but she’s all about mixing it up as often as possible and she reminds her human runners that grinding away at the same pace all the time is a recipe for boredom. Speed up until we get to that wild rose bush that smells so good. Leap over that big puddle (or don’t and jump in it instead like a little kid). Choose a side path at the last minute and see where it goes.

Everything old is new again: Sure, we’ve done this same 5-mile loop, like, half a million times together. “But did you see that there are ducks over there today? Those plants weren’t there before, we should probably pee on them. What’s that smell?” Trying to keep track of where the dog has gone and trying to keep her from rolling in things—ugh, seriously, what IS that smell?—means lifting my eyes from the trail and taking in the surroundings. Running the home trail with Piper has taught me which trees change color first, where the little purple flowers bloom, and where the owls rest after a hard morning of hunting. No podcast could possibly teach me all the things that just paying attention outside have over these years. It’s easy to remember that humans are not separate from nature when we allow ourselves to be so deeply immersed in it and observe subtle daily changes as well as dramatic seasonal ones.

Community is important: Somewhere deep in Piper’s I’m-Really-Not-Much-of-a-Border-Collie brain, there is just a tiny instinct to keep the herd together. When she tags along on group runs, she keeps track of every runner and makes sure that nobody is all alone at the back. She knows that everything is more fun together and that sometimes hanging back to chat at the back of the pack makes for the best runs of all. Running sometimes with people who are faster or more skilled on technical terrain can push our learning and adaptation. Running sometimes with people who enjoy a slower pace and conversation can introduce us to new friends, new ideas, and new stories.

Spark Joy: Some mornings there’s a cold wind blasting through our valley. Other days it’s already warming toward that 100+ degree high. Sometimes there’s snow. Sometimes there’s rain. Sometimes one of us (the one with the car keys and the opposable thumbs) kind of didn’t want to run and would have been perfectly happy to stay home sipping coffee thank you very much. But Piper has her head out the window and with an impatient little cry from the back seat, and the second she has permission to jump out of the truck, it’s “JUST SO AMAZING!” and none of the other stuff matters. When I have a hard time remembering how lucky I am to be able to move over the landscape and through the trees, the dog makes sure to remind me. And she doesn’t really care if we go two miles or ten, just moving on the trails makes you a runner no matter the distance or the speed. If you lace up the shoes, get yourself to the trailhead, and stick your nose out the window for a moment you can virtually explode with gratitude and start moving; it doesn’t matter how far or how fast you go, just revel in the fact that you are moving.

Focus on Fueling: Piper is keenly aware of that bag of treats in my pocket, and pace be damned it is entirely proper to stop mid-run and pull those bad boys out. She knows that to keep leaping and bounding a girl needs some fuel, even if it means nibbling on that elk poop over there. This gives me a chance to dig into my trail food stores, too, though I tend to stick to my energy chews and the occasional jelly bean (and then maybe avoid the puppy kisses for a while). I work at ensuring I have enough energy stores before the run to start well, and exploring the right fueling strategy is as much a part of training as tempo work or hill repeats. And the dog reminds me too that there are no “bad” foods or “good” foods (though she’d argue that cheese is very, very good food for a dog). Sweet potato fries have 2 grams of protein, 21 grams of carbohydrates, and a nice shot of B vitamins, it’s all good.

Rest is crucial, too: After a good run, and maybe a few more snacks, we have earned ourselves a good nap. There is no wrong place to recover. Whether in the backseat, on the couch, on the bed, or right on the floor where the human is destined to trip over you, allow the body to heal. If you twitch and yip a little bit chasing that bunny again in your dreams, so much the better. She says that active recovery is an excellent plan, too. She’s partial to playing keep away with a dog toy, but we also make sure to get in some foam rolling, mobility exercises, and plenty of yoga to supplement our time on the trails. She says to tell you that I really still need work on my Downward Facing Dog, though.

In our six years running together, I have become a bit slower and the hills sometimes leave me huffing and puffing. Honestly, I don’t even know what my BQ time is anymore. But I have become a better runner. I have become a more grounded and joyful runner. And most of all, Piper has helped to make me a more patient and grateful runner. I haven’t worn headphones in years; favorite podcasts are now saved for vacuuming and folding laundry. I hear my feet on the trails, and I feel the air in my lungs. I know where the Aspens turn yellow first on our daily loop, and I can tell you where the snow drifts melt last.

Piper’s coaching style won’t get me a sponsorship or a spot on the cover of a magazine, but she’s helped make me a truer runner. Now if I could just get her to stop rolling in horse poop.

Anastasia grew up in the Midwest, went to school in the Northeast and Southern California, and is now a 100% committed fan of the Pacific Northwest. She works as a policy analyst, mostly to fund a steady stream of new trail shoes and trips to races held in beautiful locations. She believes that every body is a runner’s body, and hopes that continuing to run and race through her 50s can help others to see themselves as part of the sport. She is an advocate for mindful movement and relentless kindness on the trails. When she isn’t running, she’s probably backpacking, stand-up paddle boarding, hiking, teaching yoga, dreaming of donuts, and washing trail dust off the dog.
More From Anastasia Christman