SJ Young is a trail runner and English teacher living in the Denver metro area. When not running or recovering from running, they enjoy watching Star Trek reruns with their husband and cuddling their dog, Tori.
More From Seonjoon Young 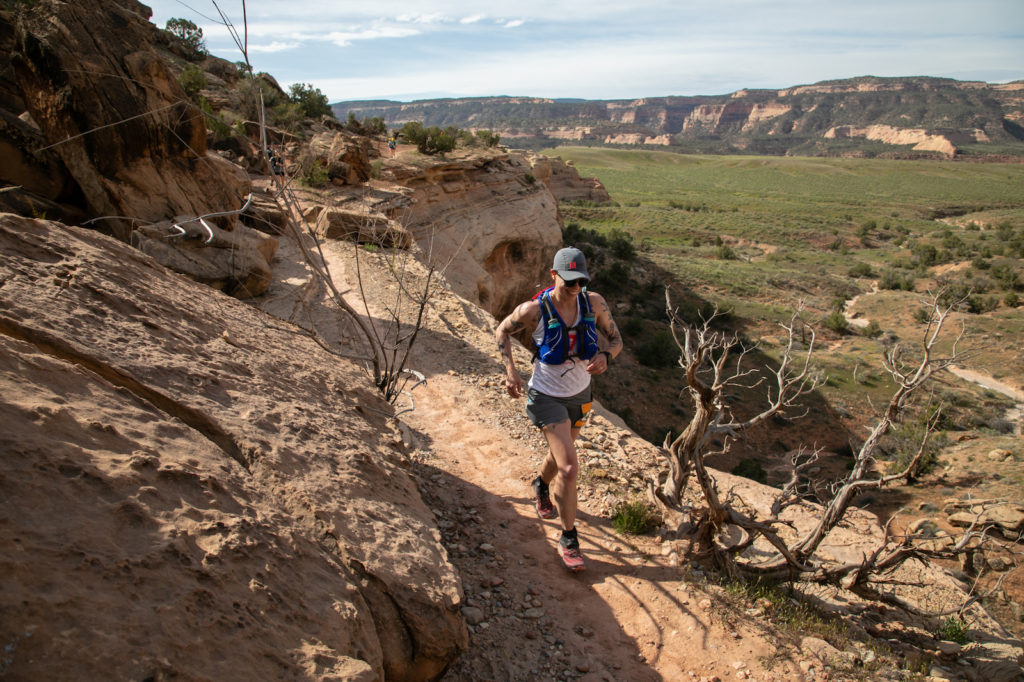 Yesterday, I went for a run with someone I hope will be a new running friend. I don’t typically run with other people. When I started trail running in 2019, it was an extension of an already-solo activity (hiking), and then Covid hit and all running groups, clubs, and gatherings were put on pause. As a result of my habits and Covid’s early restrictions, I never developed a network for social running. I’ve been trying to change that over the past couple of months, though, because as it turns out, running with people is fun. I’ve been trying area running groups, and since I live and work just outside of Denver in the front range of the Rocky Mountains, it seems like there’s a run group every day of the week, for any type of terrain or runner.

But I’ve still had a hard time finding groups where I feel comfortable and welcome, which is one reason why my husband has been keeping an eye out for potential run buddies for me even though he’s not a runner himself. He’s heard me lament that, despite the ubiquity of running groups, I too often feel awkward. My trail partner yesterday is one of my husband’s co-workers, someone he thought I might connect well with – and I’ll circle back to this below.

One major reason why it’s so personally hard for me to find running community is because I’m nonbinary. Even though I typically wear running gear you find in the women’s section; even though I’ve dealt with and been shaped by the experiences of other people who are assigned female at birth (AFAB), like menstruation and the eternal quest to find the most comfortable sports bra; even though the first time you meet me you would probably assume I’m a woman because of my voice and body (see: bra), I don’t identify as a woman.

Rather, I’m nonbinary: my pronouns are they/them, and I don’t identify with the social expectations and experiences of women. I don’t fit within the categories of woman or man, or what is often called the “gender binary.” The standard male/female breakdown provides only two identities and often only recognizes narratives around those identities that fall within a prescribed, and relatively narrow, bandwidth. We can call that bandwidth “gender stereotypes,” we can call them “general definitions,” we can call them “normal” – what we can’t call them is inclusive of all the varieties of what it means to be a man or a woman, and they certainly don’t have a lot of room for those of us under the nonbinary umbrella.

The Human Rights Campaign defines nonbinary in part as “[an] adjective describing a person who does not identify exclusively as a man or a woman. Nonbinary people may identify as being both a man and a woman, somewhere in between, or as falling completely outside these categories.” (HRC glossary) Some people identify as nonbinary, others as gender fluid, gender queer, or gender nonconforming. Some nonbinary folks also identify as trans, while others don’t. And nonbinary refers to gender identity, not biological sex; that’s why you’ll see me use the term “assigned female at birth” in this article, because when I and other AFAB people were born, we were given a gender designation (“girl”) that aligned with the biology, anatomy and chromosomes of “female” (which is a designation for sex, not gender). Gender is an identity, and it’s a spectrum. None of this touches on sexuality (the “lesbian,” “gay,” “bisexual” and “queer” portion of LGBTQ+), although I’m also queer. There are as many ways to be nonbinary as there are to be a woman or a man, so I can only speak for my own experience in this article.

For me as a nonbinary person, the running world often feels like a game of musical chairs, but the game starts with only two chairs (male and female or men and women), and even though there are lots of people trying to find a seat, those two chairs are the perfect fit for only two of the players in the game. When the music stops and we players scramble for a seat, I either have to sit in a chair that doesn’t fit me, or I’m out of the game entirely. This happens each time I show up for a group run, especially if it’s a “women’s running group.”

In my early search for a running community, I went to women’s groups because, well, I run like a woman: similar pace to other recreational and amateur female runners my age, similar nutritional concerns, similar perimenopausal experiences (for us master’s-level athletes). But I stopped going to women’s-only groups because I just didn’t feel completely welcomed.

Everyone used “she” and “her” with me, mostly because no formal opportunity had been given to introduce ourselves with our pronouns. It’s tremendously difficult for me to interrupt someone to tell them I don’t use she/her. Unless the leaders of a run take the time to get everyone introduced and to model including their pronouns in introductions, it is intimidating to break that ice as a newbie in a group. Sometimes, people also don’t know what nonbinary means, and I’ll be honest, if I’m out for a run I’m looking to sink into the joy of running, not necessarily offer a crash course in LGBTQ+ identity. When I’m not running, I’m a high school teacher, so I really believe in the power of explicitly learning about something and having the chance to ask and answer questions. I’m just not prepared to run a lesson with my identity as the central example when I’m in the middle of a run.

I also want to note that it’s not anyone’s fault that I’ve had a hard time fitting into running groups as a nonbinary person. No one did anything wrong. No one intended to make me feel left out. In fact, inclusion is one reason why women’s running groups often form in the first place, because female, AFAB, and trans athletes are excluded from the way society in general talks about, thinks about, and recognizes sports. Women’s running groups are important, and I support them. What I’m offering is a reflection on how I experience those spaces and groups, and perhaps a way to make them even better.

My first-ever trail race was the inaugural Trail Sisters Half-Marathon in Buena Vista, Colorado in September 2021. By definition, it was a race for women only. And, since in athletics “women” has come to most often refer to a biological profile that matches my biological profile, I certainly belonged at the race in a scientific, assigned-sex sense. I had a wonderful race, surrounded by all the welcoming stoke of any Trail Sisters event and buoyed by the amazing views and energy of other runners. But I didn’t belong in a social or inclusive sense, as myself. I still remember how I felt, as if I were slightly outside the group. I also want to recognize that a trans woman might have felt included at the same race because of her social experience and identity as a woman, while that aspect is what put me on the margins. What I hope to highlight is how complicated a simple word like “woman” can be for nonbinary and trans people, and that unpacking and articulating that complexity is actually a move toward inclusivity in and of itself.

Circling back to my husband’s co-worker, he introduced us as potential running buddies because his coworker is also nonbinary and an ultra runner. T and I met up mid-morning and headed out on a popular set of local trails. We talked about upcoming races (me: Desert Rats in Fruita, them: Dirty 30 in Golden Gate Canyon) and swapped PT routines for plantar fasciitis. We huffed up a steep ascent and watched our footing on a technical downhill. We traded long run snack options. In short, we talked about everything runners talk about. In between shoes, snacks, and hikes, T also said, “It’s really nice to just not have to explain myself and my experience,” meaning being a nonbinary athlete. I’d felt shy to say it, but I knew exactly what they meant and couldn’t have agreed more. Being in a space that welcomed me meant that I could be a runner and talk about runner things, instead of feeling like I was only partly seen and only partly welcomed because my gender identity had been, incorrectly, assumed. For one morning, for one run, I found community, and it meant the world.

If you’re an LGBTQ+ person reading this, know that you belong in the women’s trail running community. Lesbian and queer women belong, transgender women belong, AFAB nonbinary people belong, and genderfluid people belong. If you’re not a part of the LGBTQ+ community, there are some simple things you can do to make your running group or event more welcoming and inclusive for everyone:

SJ Young is a trail runner and English teacher living in the Denver metro area. When not running or recovering from running, they enjoy watching Star Trek reruns with their husband and cuddling their dog, Tori.
More From Seonjoon Young