Homepage / Community / Believe in Yourself, No Matter your Age

Believe in Yourself, No Matter your Age

Grew up in New Hampshire; learned to ski at age 8. Moved to California in 1981. Traveled to Australia with Earthwatch to count migrating birds. Went river rafting for the first time in France. Worked in the tech industry installing proprietary software until I had my daughter. I counted the days until I could put her in a bike seat. Lifelong love of photography, books, movies, cats, vegan. Would love to find other women in their 60’s who enjoy running trails!
More From Debby Joyce 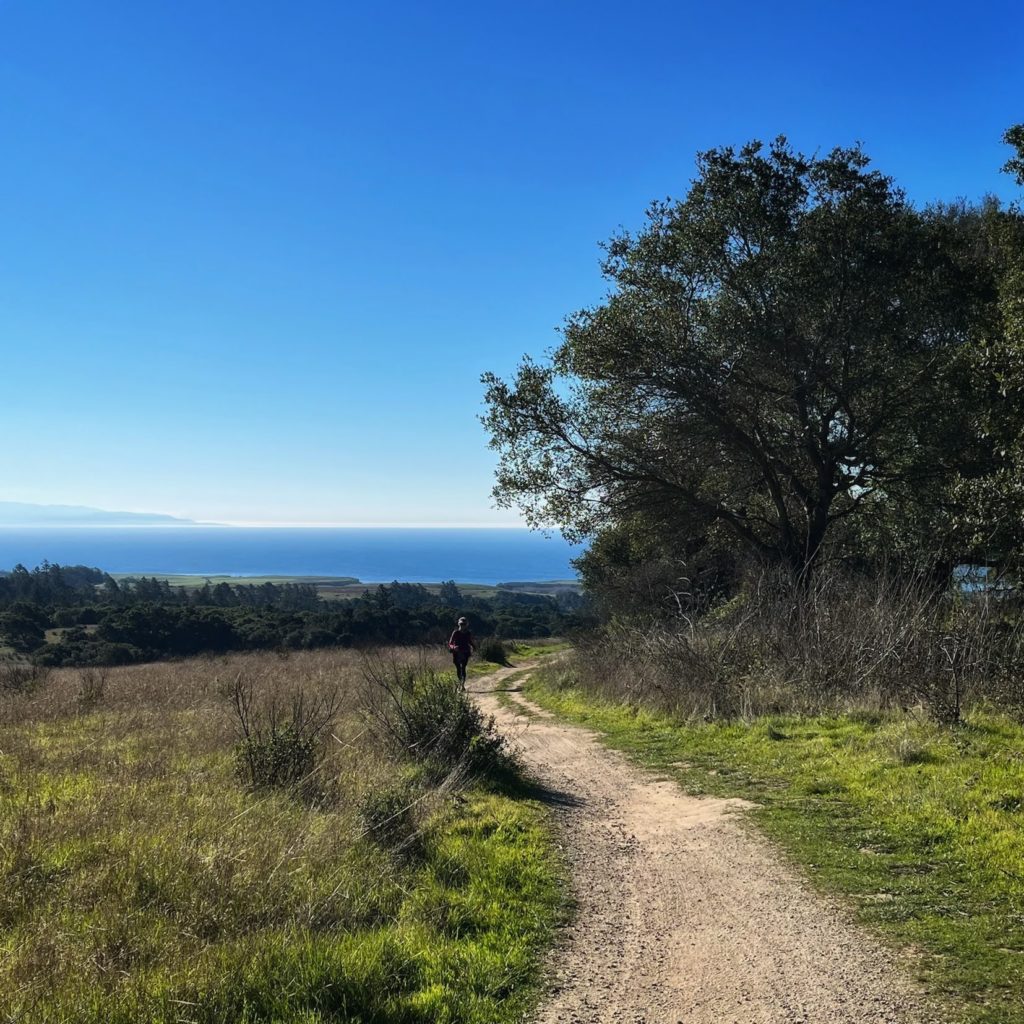 You should sign up for this! My daughter Emma texted one day. “This” being the Lake Sonoma Marathon. The longest runs I had completed were half-marathons. My first half was December 31st, 2018, at age 64, also encouraged by her. Somewhere during her running journey, she discovered trail running and a love for endurance running. She shared the trail discovery with me, and I was hooked. There is nothing like running in nature. In retrospect, it’s no wonder I love it, as I spent as much time as I could outdoors in the woods as a kid and an adult. I love it.

I briefly looked at the info for the marathon, and I do mean briefly, as in, never looking at the course. The wonderful fact that Trail Sisters was a sponsor (women!), and they were allocating 10 hours to complete (piece of cake!), made this an easy decision. It was practically local, and I knew we could stay at my sister’s home nearby (with a post-run hot tub). It was such a non-issue—signing up—that I neglected to tell my daughter until it came up in conversation.

I had never participated in a runner’s training plan. I saw an ad soon after registering for Lake Sonoma (targeted I’m sure) for an online marathon training course with the catchy title “Running through Menopause.” Menopause was in my past, but I was pleased to see many runners over 60 in the program. Cool! Sign me up!

The training plan was excellent and echoed the Pilates classes I had been attending before committing to this plan. The emphasis on strength, core, feet, ankles, toes, and balance, felt great. I also discovered that intervals were fun!

When I was in my mid 20’s to mid 30’s, I ran for exercise and the endorphin rush. Running was just becoming popular in the late 70’s, at least where I lived. I remember running in the snow in New Hampshire, before moving to the Bay Area where thankfully there wasn’t any snow. We didn’t have watches to calculate our pace or heart rate or cadence or even distance (or maybe those devices weren’t on my radar). We just ran. I don’t remember clothing being a “thing.” I have photos from a Bay to Breakers 10K and I’m wearing shorts. Just dorky gym shorts and a t-shirt. All cotton, I’m sure. No phone to carry, no ear buds, no water bladders, no running-targeted “food.” For shoes, I have no memory of what brand, but I suspect Nike or Adidas—probably the only ones available. And the obligatory white socks. We looked like nerds, but we sure had fun!

At some point, I did study the course details and was shocked: over 5,000 feet of elevation gain and nine river crossings (was hoping for less with the drought). Though I didn’t even notice when I signed up, the word Relentless was the subtitle of this race.

Okay! So, my mind started screaming you are going to drop dead on the course and no one will even know! You’ll trip and break a bone! You’ll run out of salt tabs or gels or water! Who is going to rescue you in that forest? What in the heck are you doing? And you are way too old for this!

Undeterred, I sought out our many local hills, ran more distance than my plan suggested on a few occasions (oops! but my mind needed to know I could); tested different gels, goo, electrolytes, bars, and pop tarts, and carried a lot of water. I felt pretty good.

The week leading up to the run (dropped the ‘race’ title after seeing what I was up against), I was amazingly calm. I had done all I could, I told myself. There was nothing left but to bring my work to the course. Calm yes, worried, well, maybe a bit; but let’s be honest, it was more than a bit. To counter the worry, I decided to write down every single run I had completed since January, including distance, pace, and elevation. Dang, I ran a lot of miles and climbed a lot of hills.

Race (run!) day arrived. The morning had a calm and quiet atmosphere as we ate a small breakfast (which had passed pre-run tests numerous times), before heading out to the course. It was cold, so a group of Trail Sisters’ runners sat in a van and waited for the start. Being a newbie amongst a much younger crowd, it was comforting, in a strange way, to hear the worries everyone was facing. Worries apparently know no age barriers.

I had told myself that I was going to fast walk/jog the first two uphill miles and I stuck to that plan. I met people at the back doing the same: one was a first-time marathoner, celebrating her 30th birthday, and two others were older men. One had participated in this run 17 years ago. All kind people to chat with.

Once we hit the trails, I was alone for a very long time, almost the entire first half, except for the runners who were already heading back. There was one location where a tree had recently fallen, and I couldn’t see the flag that designated the course. I turned around, feeling panic starting to creep in as the trees slowly started to resemble a horror scene where they grow and cover the sky, so it is dark and they eventually swallow a human whole. I went back, and sure enough, the trail ran around the downed tree, and look—there was the flag! Phew. Panic averted. Trees relaxed and still.

It was beautiful running along Lake Sonoma. So many hills! And so many spectacular views. The hills and fields were a gorgeous green (thank you rain!) sprinkled with wildflowers. There were only four river crossings, not bad! The weather temps were perfect.

When I reached the turn-around, the woman behind a table of pseudo-food asked straight away, “what have you eaten?” and ordered me to eat a peanut butter sandwich. And ‘drink water, and refill, and here is some goo and electrolytes.’ Then she said, “now go! get moving! don’t stop or you’ll cramp!”

Leaving the turnaround, I briefly considered going back and bailing. Briefly. (The support team seemed like they were having fun, playing music, helping runners. I could hang out.) It was close. But I told myself I came here as prepared as possible, I’m still standing, I can still run, I can hike, I can walk, I will finish, I have everything I need (goo, electrolytes, salt tabs, tons of water) and most importantly, a determined mindset.

The second half was surreal: was I really doing this? It was also enjoyable (uplifting to encounter more humans on the course), and at the same time, long! I could see where I was headed around the lake and at every turn, the destination seemed to drag on forever. I must get to THERE, and then THERE and then . . .  it seemed impossible to accomplish. Yet, the sun was brighter and warmer. I could recognize parts of the course which were comforting. I enjoyed hearing the boaters having fun on the lake. Hours later, when I reached the top of the hill that designated the end, I thought, “there’s no way I just did that!”

To have a daughter reach out to her much older Mama to share these experiences, is an immense blessing. Emma began running prior to nursing school, motivated by, as she says, “a particularly killer kickboxing class” in the spring of 2016. She made a snap decision to run the Santa Cruz Wharf to Wharf that year. While at grad school, she was inspired to run her first half marathon: the Disney World Half Marathon, followed by two more half marathons before graduation. “It was a 1000% stress reliever, probably compulsive at times, but it got the job done,” she says. Upon returning to Santa Cruz, she discovered Trail Sisters through two co-workers. Emma is an inspiration not only for her ambition and support, but for the constant, extra work she shoulders every single day, living with Type 1 diabetes. I am proud to be her mom! And happy to be running again.

Grew up in New Hampshire; learned to ski at age 8. Moved to California in 1981. Traveled to Australia with Earthwatch to count migrating birds. Went river rafting for the first time in France. Worked in the tech industry installing proprietary software until I had my daughter. I counted the days until I could put her in a bike seat. Lifelong love of photography, books, movies, cats, vegan. Would love to find other women in their 60’s who enjoy running trails!
More From Debby Joyce