Homepage / Community / Injuries on the Trail

Injuries on the Trail 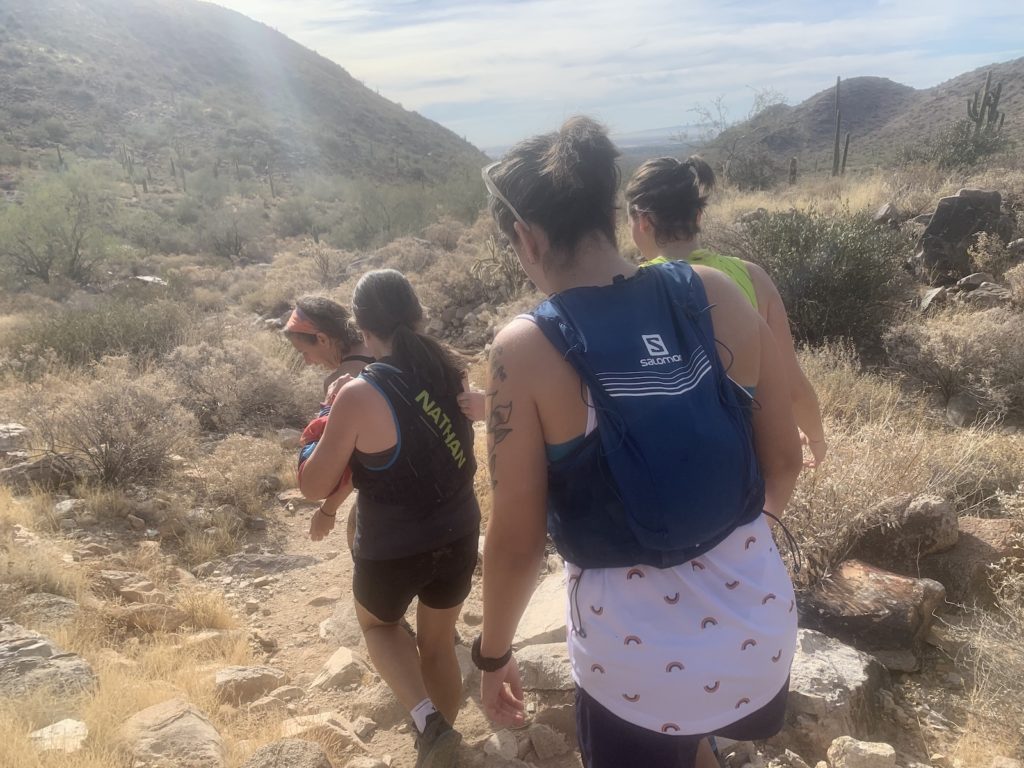 Lauren and I had just turned around and started back down the trail when her phone rang.

Her wife Analis had been behind us on the trail with my co-leader Chris, the other runner in the group sandwiched between us. We had stopped periodically to check in and had just seen the fifth runner moments ago.

I took the phone; I could hear the tension in her voice.

“You need to come down right now. She fell, I think her wrist is broken.”

I told her to try to contact the park ranger and I would be there soon.

Running down the mountain my mind replayed points from my Wilderness First Aid (WFA) class in my head. Within a few minutes we reached the other runners. I slowly approached, taking in the scene. There was also another bystander to the side on the phone, I figured he was talking with the park rangers. I made sure the injured runner was coherent and her pulse was normal. I checked her for other injuries and reassured her while I did. It was clear that the wrist was broken. We brainstormed for what items we had to make a splint. We were just about to send someone to the cars for items when we realized one of us had a frozen bottle that was perfectly sized. Using that as support, my vest as padding and a buff and a tank as ties we got her splinted.

By this point the bystander had disappeared, leaving without giving any kind of information from the phone call. Since we had moved her injured arm to splint it, I rechecked the runner’s vitals. Then I calmly explained that we could sit here and wait, or if she felt up to it, we could just head to the trailhead. She agreed to try to stand and then see from there. Once we had her on her feet and she didn’t feel dizzy we started the hike out.

The injured runner was in good spirits considering and we kept her occupied with stories and jokes. Suddenly a search and rescue helicopter appeared. Apparently, our friendly male bystander hadn’t had the same faith in us that we had, even though we had told him repeatedly there was someone certified in Wilderness First Aid as well as two vet techs in our group. We called dispatch to alert them that we had moved the injured party and the helicopter located us and landed.

As the helicopter team came over, they pointed out that the injury didn’t look that bad (we knew) and asked who had splinted the arm (me). Since the helicopter was already there our friend decided to take the quicker way to the trailhead. A ground crew had also showed up by foot and the pilot looked at the remaining four of us and said, “You’re in good hands to get back to the trailhead ladies.” To which we replied “Yeah, I think we got it.” We ran back to the cars, a fire truck brought us the injured runner’s keys so we could driver her car to the ER for her. After a quick hug and some reassurance our job was done.

Reflecting on the events through the lens of my WFA training I feel like there are some learnings that would be helpful for anyone on the trail.

Overall, aside from missing a chunk of my long run, the day ended well. I hope that I’ll never have another situation like that or worse out on the trail, but I enjoy being confident in the knowledge that if I do, I’m equipped to be useful to myself and those around me. I see it as part of being a good trail user, as vital as being polite to other trail users and protecting the wild spaces I explore.