Elizabeth lives and runs in Portland, Oregon. When she’s not on the trails in Forest Park, she works as a nurse practitioner and owns an integrative health coaching practice, Flower Power Health, where she works with runners. She’s passionate about science, inclusivity, and helping people approach their bodies with kindness and curiosity. A few of her favorite things are dogs, rock and roll, and pizza. You can find her online at www.flowerpower.health and on Instagram @flowerpower.health.
More From Elizabeth Knight 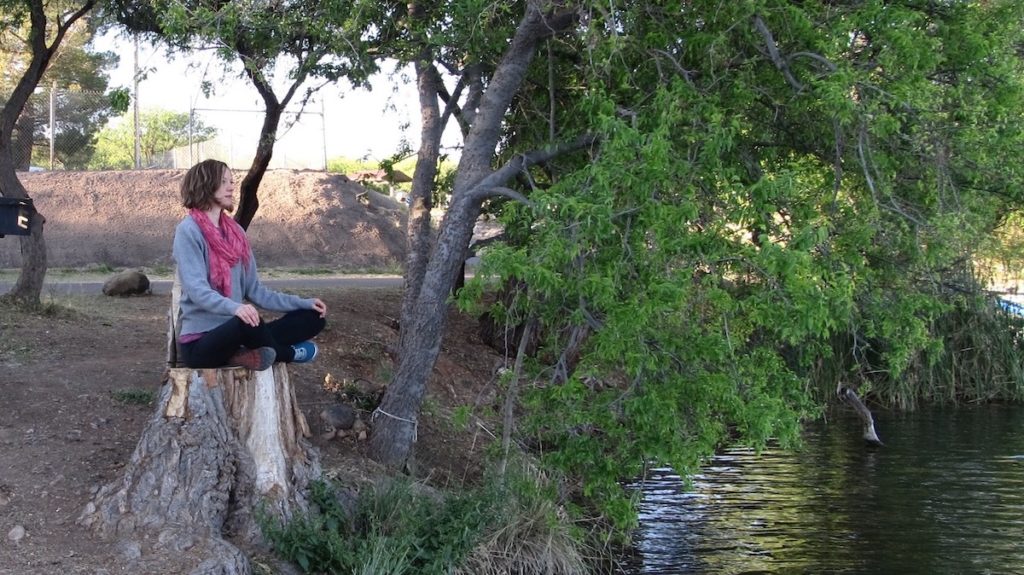 Last night, I was sitting at The Sports Bra in Portland with a group of fellow Trail Sisters after our run (shout out to a bar dedicated to supporting and empowering women’s sports). Our group included experienced ultra runners gearing up for major summer races, new runners psyching themselves up for their first half marathon, and lots of us in between. As we enjoyed our post-run refreshments together, we got to chatting about the Women Who FKT  project. One of the newer runners in our group pointed out a local route with no FKT posted. A unanimous agreement followed: “you have to do it!” She demurred, saying she was too slow, the route wasn’t significant enough, it wouldn’t matter, yada yada yada. Maybe it was the leftover endorphins or maybe it was the cocktails, but the chorus of protest was loud. The message was clear: big goals are fabulous, and everyone is worthy. The group had spoken!

This got me thinking. What makes us say no to big challenges, even when part of us really wants to say yes?

Turning off the “no” habit

In my day job as a health coach, I work with athletes on defining their goals. When we first start, I ask clients to tell me about their best athletic day ever. Then we talk about what values they hold that made that day feel so awesome for them. Was it the sense of freedom? Community? Feeling powerful? Being in nature? Next, we talk about big dreams, brainstorm-style with no wrong answers. And this is where the really interesting stuff happens. People want to do cool things. Set an FKT. Run a big ultramarathon. Run every street in a city. Anything you can think of, and more! People are wellsprings of cool ideas.

This process works because it short-circuits overthinking and taps into the true self. It turns on “yes” before the habitual “no” figures out what’s going on. In this frame of mind, you can let yourself dream wild. You can say things you didn’t really even know you wanted. You can hear yourself, without the rising internal chatter of reasons you can’t do totally epic things. Most of those reasons are not real. They are based on faulty beliefs installed in you long ago by systems built on fear and scarcity. They might say there’s not enough time. They might say you aren’t strong enough. They might say enthusiasm makes you look silly. They might even say you don’t deserve to do what you really want. Over time, most of us have internalized beliefs. You’re so used to them that you can’t even see them anymore. They just become your baseline.

Turning on your “yes” brain

When you get excited enough about something to override some of these pesky inhibitions (those party poopers!), amazing things start happening. Sometimes this happens in a coach/client conversation. Sometimes it happens post-workout with other Trail Sisters. And sometimes it happens on a random Friday night at your kitchen table while you browse UltraSignUp, with or without a nice glass of pinot noir. You get that “this is awesome!” feeling, and before you know what’s happened, you’re committed. You said yes. You put in your credit card number. You booked the flight. You have the energy of a new, big, audacious adventure driving you. You’re on fire! Time to start training!

Commit to a Scary Yes and figure the rest out later

Now, I don’t mean that you should get plastered every weekend and sign up for things you’ll never be able to adequately prepare for (but hey, it happens!). This is a recipe for injury, debt, and probably a hangover. But a healthy dose of “say yes now and figure out the details later” can be just what you need to bust out of a rut. Sometimes you need a little push to get past those faulty beliefs that taught you to say “no”. Committing to something that scares you a little is a surefire way to expand the boundaries of your life. It’s a powerful rebuttal to the “I’m not worthy” message you might have fallen for. This is the Scary Yes, and amazing things lie on the other side.

The Scary Yes in action

Here’s how a Scary Yes worked for me. I’m a natural introvert, and though I love people when I get to know them, I’m not the most gregarious and outgoing person. When I first moved to Oregon a few years ago, I knew that making friends here would take some time and attention. I would have to do some things that were outside of my comfort zone. Like jumping in on a Hood to Coast team at the last minute, committing to spending the weekend with 10 strangers and one acquaintance, taking turns running across parts of the state I’d never even heard of, riding in a smelly van, and eating A LOT of peanut butter pretzels. For many (including me!), Hood to Coast is a bucket-list race, but it would have been easy to ignore the inner “yes!” when the invitation came. It’s too soon, I don’t know these people, I haven’t really trained for this particular event, yada yada yada.

But I said yes (scary!) before I thought about it too hard. It was Hood to Coast! It was now! My lingering doubts (and I had plenty) were no match for the power of 11 people counting on me. A few weeks later, my partner dropped me off in a stranger’s driveway with a change of clothes and some snacks. I had a blast, mostly, and I will remember that weekend forever. It launched me into new running communities and new levels of confidence. Next time, I’ll prepare for the downhills and bring more snacks. Lessons learned, sure, but none of those excuses circling in my head were dealbreakers. That experience transformed me into a person who could hang with a group of strangers, and who didn’t doubt her ability to cover the miles even if everything wasn’t perfect. Those learnings have come with me into my new job, this year’s ultra-training, and my relationships.

That Scary Yes unlocked some doors for me. What will yours do for you?

Elizabeth lives and runs in Portland, Oregon. When she’s not on the trails in Forest Park, she works as a nurse practitioner and owns an integrative health coaching practice, Flower Power Health, where she works with runners. She’s passionate about science, inclusivity, and helping people approach their bodies with kindness and curiosity. A few of her favorite things are dogs, rock and roll, and pizza. You can find her online at www.flowerpower.health and on Instagram @flowerpower.health.
More From Elizabeth Knight