Shelli Altopp-Miller finds joy in the journey. Life is full and fast as a cyclist, trail runner, sometimes triathlete, hiker, camper, Yoga and Pilates teacher, mom of two, wife, and school social worker, and there is adventure in the everyday details. Among her favorite memories is cycling the entire Blue Ridge Parkway in 8 days. Her vibe is that she’s always along for the ride.
More From Shelli Altopp-Miller 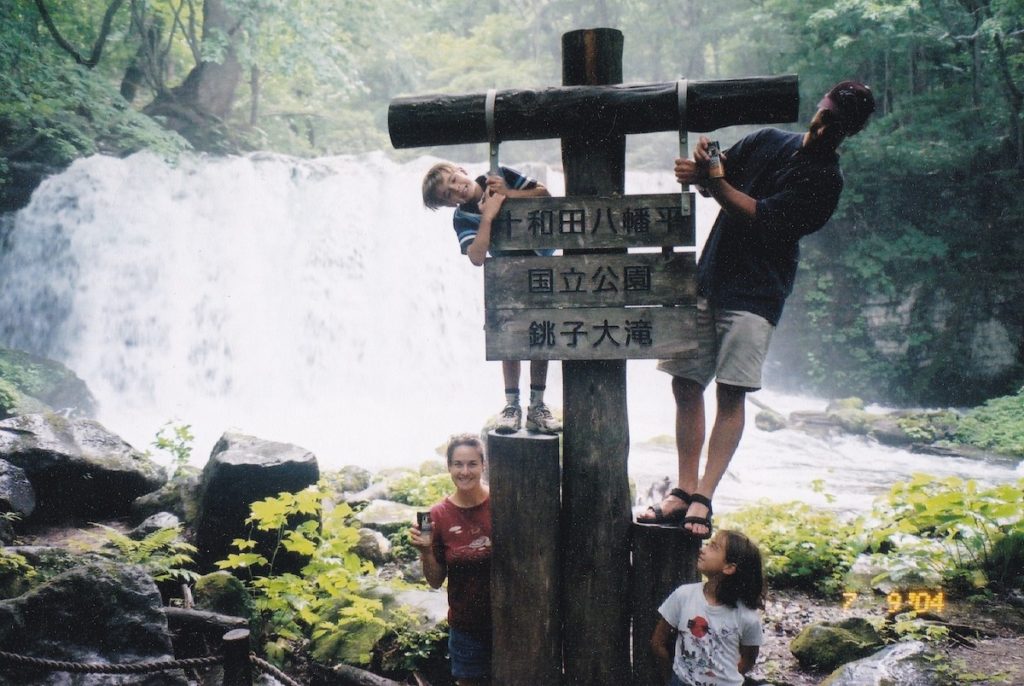 Japan is rich with natural beauty, culture, folklore, and mysterious beasts. The northernmost prefecture on the main island of Japan was home for a few years with my active-duty Air Force husband and our two children. Situated between the Pacific Ocean and the Sea of Japan, punctuated by the Hakkoda Mountain Range, dotted with lakes, rivers, and rice fields, this resplendent area is ripe for outdoor adventure. This was where I first scuba-dived and got PADI certified. It’s where I learned to cross-country ski and where my kids learned to downhill ski and snowboard. Soaking in onsens, the traditional public hot baths was a favorite cultural experience, especially outside in the winter.

One spring when the kids were around 6 and 8, when the 220 inches of winter snow finally melted, and we could trade out skis for bikes, hiking boots, and tents, we went on a camping trip. The weather in Northern Japan in the spring is iffy. The snow may be gone but the chill and fog typically linger on until late June. In the whole campground, there was only one other tent and no people in sight. This gave me pause. Where was everyone else? Were we too eager to come out of hibernation? We drove around to the other end of the forested campground just because the husband would rather be backpacking than fam camping and this was as close as he could get to it. We pitched our big family tent, unpacked the car, rolled out sleeping bags, and cooked supper on the Coleman. Later, we cozied up to the campfire until bedtime. It was a chilly, dark, clear night. When I awoke the next day, I couldn’t find my bra. I only had the one I had been wearing the night before. I searched everywhere and couldn’t understand how something I’d just taken off before bed could’ve disappeared. As a well-endowed triple D lady, I couldn’t just throw on a shirt and go about my business. No, my boobs were sloshing to and from, hanging down to my stomach, and desperately needing the over the shoulder boulder holder. I had the whole family out searching the campground for that thing. No luck, so we packed up and went ahead with plans to tour around tiny local towns, find a short hike, and hit up a noodle shop for lunch to enjoy ramen or Udon.

I was sagging and not very comfortable but not about to ruin the trip for everyone. There were no shops in which to buy another bra and, frankly, it would be hard to find one in my size. My only saving grace was a jacket I threw on to disguise my situation. I didn’t want this to turn into my second unintentional foray into international scandal – the first being on a different family vacation when I emerged from the chilly Pacific Ocean with my old standby, modest one-piece mom suit to see a man filming me. I was perplexed and looked around to see if his family – or a celebrity – was next to me. Then, looking down, was shocked to discover that my swimsuit had become threadbare over years of use.

Now touring off the beaten path, quaint Japanese villages with the family, bra MIA after a night of camping, we stepped into a small museum. We learned about a wild mammal native to Japan called the raccoon dog, which is genetically related to dogs, foxes, and wolves but resembles a raccoon. Raccoon dogs, or Tanuki, are the stuff of Japanese folklore. They are described as mostly nocturnal, mischievous, and jolly masters of disguise. Just then in the museum, I exclaimed that a raccoon dog must’ve stolen my bra! That was the only explanation that made any sense at all. We all pondered this thoughtfully until someone wondered aloud whether a monkey stole my bra.

On another camping trip in northern Japan, we were searching for a remote beach we’d heard about with a pretty lagoon, clear water, and interesting rock outcroppings. Due to road construction, we had to park the van and walk the rest of the way, though we weren’t certain how far away the beach was from there and there was no cell service. In flip-flops, carrying bags with towels, sunscreen, water, and food in the hot July sun, we had gone about 2 miles on a deserted dusty road when an eerie recognition crept in that we were being watched. Indeed, the trees on the steep hillside next to the road seemed alive. Focusing in amidst the dense branches and leaves, we could make out scores of wild monkeys! Do wild monkeys ever attack people, I wondered. We were defenseless should they decide to jump out of their trees and get us. There were no homes around, just trees, sky, road, monkeys, and us. Staying calm for the kids’ sake, we averted our eyes from the trees and walked calmly onward. A couple miles later, we made it safely to the beach and, later, found another way to get back to the van that avoided that section of road.

No, it was definitely a raccoon dog who stole my bra. Monkeys weren’t as prevalent in this area. I convinced my husband and kids and we talked about it for weeks, how the raccoon dog slipped into our campsite and made off with my bra under the dark cover of night. I couldn’t put my finger on exactly how it might have accomplished this, as I took my bra off inside the tent. Could Tanuki unzip the rainfly and door without waking anyone up? Maybe when I got up to pee in the night, my bra was hanging off my nightshirt or pajama bottoms and fell in the woods, unbeknownst to me. I also wondered why it selected that particular item with which to abscond. No one could be certain; but I knew that mischievous bandit, the stuff of legends and folklore managed to snatch my bra.

Shelli Altopp-Miller finds joy in the journey. Life is full and fast as a cyclist, trail runner, sometimes triathlete, hiker, camper, Yoga and Pilates teacher, mom of two, wife, and school social worker, and there is adventure in the everyday details. Among her favorite memories is cycling the entire Blue Ridge Parkway in 8 days. Her vibe is that she’s always along for the ride.
More From Shelli Altopp-Miller