Doni Perry is an ultra runner and triathlete. She is a two-time Ironman finisher and has completed three 50-mile ultras. With a day job in marketing, a husband who’s also an ultra runner and one kid still living at home, she’s constantly striving for balance between training, work, family and fun. You can follow her adventures on Instagram @ultraironmom.
More From Doni Perry 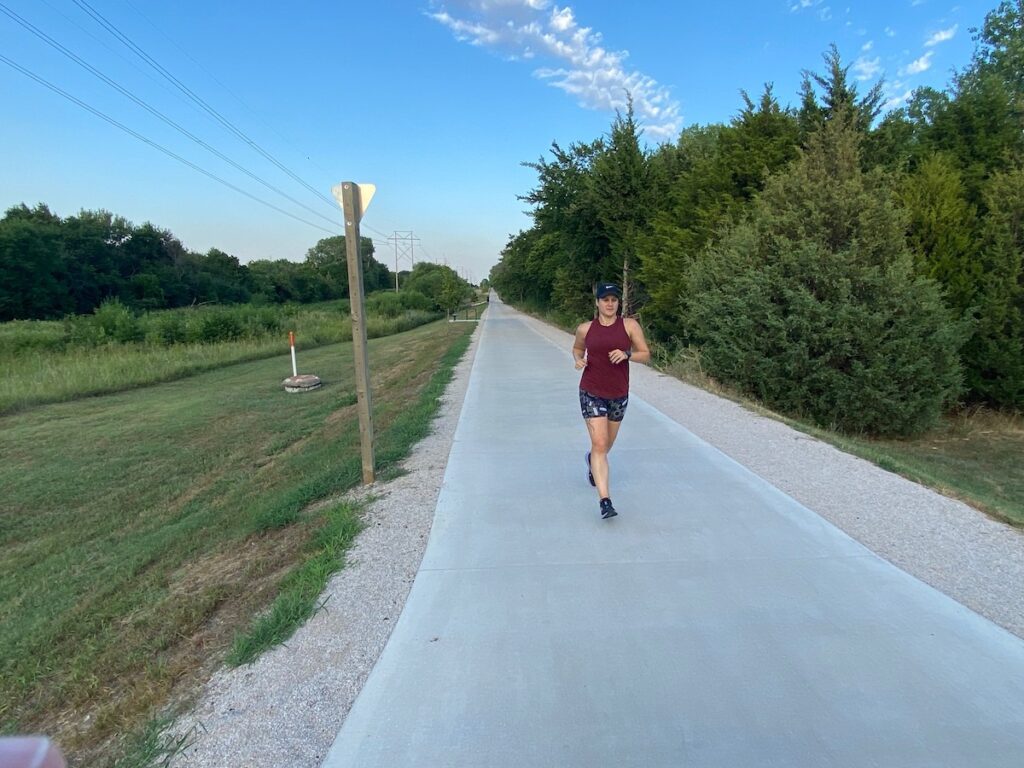 I have this bad habit: I sign up for races with lots of hills, but I live in a nearly pancake-flat area. For example, my first ultramarathon was a 50-miler. My longest race before that was a marathon … at the end of an Ironman triathlon. My then-boyfriend (now husband), Chris, told me how great ultras were and that there was one coming up on a really pretty trail a couple of hours from our city, so I signed up to run it with him. Unfortunately, he neglected to mention all the climbing on the course.

On race day, it only took a couple of miles for me to realize I was woefully unprepared for this course. There were SO. Many. Hills. As we trudged along, basically hiking the last 45 of the 50 mile race, Chris casually mentioned that most people don’t start out with a 50-miler for their first ultra, they start with 50K. He meant it as a compliment, but it made me wonder exactly how far in over my head I’d gotten myself. Turned out, I was in pretty deep.

Chris kept me motivated and stayed with me for the entire 16 hours and 35 minutes it took me to finish those 50 up and down miles, including when I sat down in an open spot two miles from the finish and just stared up at the stars. After contemplating whether or not I really needed another little piece of metal to hang around my neck, I eventually stumbled the rest of the way to the finish line and collected my hard-earned hardware. I was relieved to be done, but little did I know the suffering had just begun.

After our drive home from the race, I had to climb three flights of stairs to my apartment. My quads were so sore from the hills that for three days, I had to use my arms to lift myself up every stair. And back down the stairs. And on and off the toilet. If you’ve ever run a hilly race you weren’t prepared for, you understand the struggle.

This course had more than 2,000 feet of elevation gain.That may not seem like a lot, but I live in the middle of Kansas, where the biggest hills are highway overpass embankments. In fact, the 4-mile loop I typically run around my house has a whopping 75 feet of gain. (Nope, I didn’t forget a zero.)

To feed my bad habit, I signed up to run another 50 miler, the Heartland 50, in a hilly part of our state called the Flint Hills about a year and a half later. This part of Kansas is deceptive because the hills are long but they never stop and many of them are steep. I had run this course the previous year and totally trashed my quads, so this time I enlisted the help of my triathlon coach to prepare for hills without actually training on them.

I am happy to report that with her guidance, I was able to finish the race as the 4th female with a personal best time of just under 11 hours. To make the day even more special, Chris got down on one knee at the finish line and became my fiance! We married a few months later at the Run Thru Wedding during the Las Vegas Rock ‘N’ Roll Marathon.

Now that I’ve shared my hard-earned lessons about running hills when you’re unprepared, here are six tips I’ve used to train for hills while living in a flat flyover state. In fact, I’m currently using these tools as I train to pace Chris at the Javelina Jundred in Arizona this fall. While I’m not a coach, this is what I’ve done with my coach’s guidance and it’s worked wonders for me.

There’s nothing like good old fashioned stair running to strengthen the climbing muscles. I use stadium stairs, my stairs at home, or one of our local gyms that’s 3 stories tall. I typically do stair training in conjunction with a track workout, or I’ll mix in squat jumps, jump rope and short run intervals to break it up and work different muscles. I do both single and double stairs to get my legs used to different step heights.

I’m fortunate to work two blocks from a YMCA, so when I’m training for a hilly race, I spend one lunch break a week on the stairmill. You might also call it a rolling staircase – it’s like a treadmill of stairs that you can keep climbing for as long as your quads (and your sanity) can stand it. I personally don’t focus on speed, but on keeping a steady pace that I can manage while staying upright. So many times I see people laying over the handles or hanging off of them, but I try to mimic real stair climbing as much as possible to get the full benefit. One trick my coach suggested to build strength and break up the monotony is to do my run interval workout on the stair mill. I just increase the speed on the hard intervals and then slow down for the recovery. It helps me get better at climbing while making the time go by faster, and it’s easier on my joints than running.

This is another classic workout for hill training, but I have to travel a bit to do it. I find the biggest hill I can and run up and walk down for 30 minutes to an hour. Sometimes I’ll do squat jumps after each walk down, or I’ll take my jump rope and get in 30 second or so of jumping rope. There’s a small sledding hill at a park about 20 minutes from my house that lots of runners use for hill repeats. If I have a lot of time, there’s a lake about 40 minutes away with a dam that runners and hikers use for hill training. I’ve also used highway overpass embankments, but they’re often overgrown with weeds and they’re very short and steep. People in my running groups have also been known to run in parking garages, but I haven’t tried that yet.

My newest hill training option is the incline treadmill at my local gym. I just plug in and rewatch Friends or Schitt’s Creek and climb to my heart’s content. It has both incline and decline options, so it’s my most realistic option for hill training. I typically do intervals on the incline trainer during my lunch breaks at work, mostly walking, but with various high inclines the entire time.

This is the most important part of training for hills without actually running them. Strength training helps me build muscles that allow me to climb longer and balance better on uneven terrain. Squats, lunges, deadlifts, core work, weighted step ups and plyometrics strengthen the glutes, quads and hamstrings so they’re ready to conquer hills.

Finally, there is the activity I love to hate. Living in a flat state and working a desk job is not a good combination for preparing to run hills. I have chronically tight hips and hamstrings, both of which make climbing more difficult. Foam rolling once or twice a week and gentle stretching in the evenings before bed have helped improve my movement on the trails. Since knee pain is often tied to muscle imbalances and hip issues, I do mobility exercises once or twice a week to help me stay pain-free. Instagram has been a great resource for finding runner-specific stretches or mobility routines to help open up my hips and loosen my hamstrings.

Find What Works for You

If you live in an area without hills, don’t let that stop you from training for and completing your dream races, even if they have a lot of elevation gain. These are the tips that have helped me successfully run hills without training on them, but I encourage you to experiment and figure out what works for you.

Doni Perry is an ultra runner and triathlete. She is a two-time Ironman finisher and has completed three 50-mile ultras. With a day job in marketing, a husband who’s also an ultra runner and one kid still living at home, she’s constantly striving for balance between training, work, family and fun. You can follow her adventures on Instagram @ultraironmom.
More From Doni Perry