Belief, A Journey from Illness

Valerie’s happy place is with her partner and her dog in the mountains. She loves to travel, see new things and run new trails. Destination races are always on her radar! Valerie lives in Ft. Collins CO and is a native of Colorado. She loves the community of trail runners and what trail running brings to her life. She hopes to share a message of encouragement by educating others on autoimmune/ invisible illnesses and the healing power of food. Valerie believes that hard things are possible, you just gotta believe in yourself!!
More From Valerie Collins 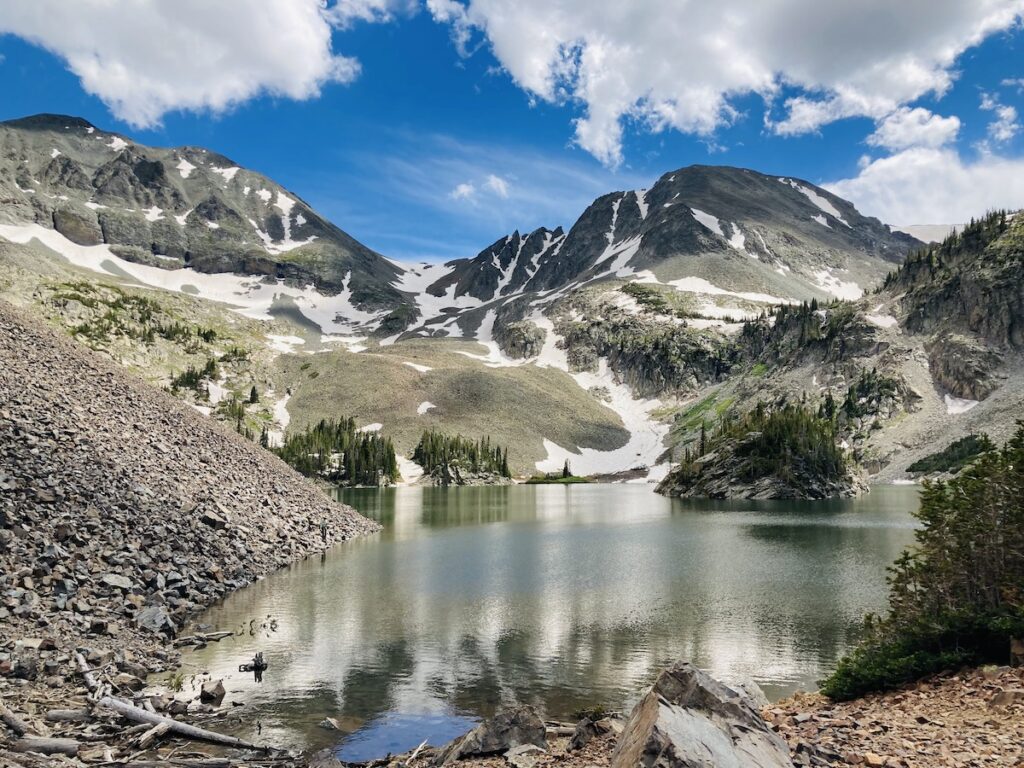 She thought she could, so she did.

This is my story about taking control of my health and my journey to a MONSTER 60k.

I got my diagnosis of Ulcerative Colitis just after Christmas of 2021. A huge wave of relief swept over me when I got the results back. It was great knowing that there was something wrong with me. Previously I had been diagnosed with IBS and had been plagued for years with chronic pain and other mysterious ailments that never got resolved. It was never really disabling, until July of last year. I don’t know what happened, and my guess is, I never will, but all of a sudden I was having trouble leaving the house, and by December I was pretty much housebound.

By July 2021, I had just about given up on doing things. I was at that time, mountain biking and racing my bike. But I quit, because even that seemed out of reach and too hard to do. In addition to the gut issues,I was and had been dealing with severe fatigue for years. Due to Meniere’s disease, my balance was horrible, and my endurance was gone. I also had been steadily gaining weight and was having a really hard time losing it.

So I quit riding my bike and fell into a deep depression. I felt like I was unable to do anything at all. But still, inside me, there was a desire to go big. Do the big, hard, and audacious things.

Though the heavy brain fog and chronic pain had intensified and migrated throughout my body over 20 years, I remembered I loved running at one point. Trail running, to be clear.

I felt like I could stay on my feet for long distances and push through and persevere until the end. I had done a couple of trail marathons and a couple of desert 50ks while running a few years back, so I had that. I also remembered that I loved yoga. I have been an on and off yogi for a little more than a decade but had not gone in over a year or two due to life and, well the pandemic.

Having remembered that, being sicker than I ever have, I started running again. At first, it was hard. Really hard. Like, I couldn’t go hardly 2 miles without my legs hurting. Being able to run just 3 miles again, on pavement, took a while. My motivation was low. Super low. Plus every run was a crap shoot (literally! Ulcerative Colitis is not fun) of trying not to embarrass myself while running.

Yet, I persevered. I had dim recollections of this somehow working before and thought for some reason it would again. I just needed to keep at it.

I had my first milestone – 3 miles in one run! Then 7 miles in one week. So that meant I was starting to be able to run more than once a week. Then, my first 5 mile run in quite a few years. I didn’t know if I could do it but remembering my past experience, I believed I could. And I did. I had been there before, just not under circumstances like what I was now facing.

I knew that the depression I was dealing with was deep. I didn’t know if I was quite ‘brave’ enough to leave this world, but I was clearly thinking about it. As I started running again and my love of running resurfaced, I sought help for myself. I wasn’t ready to leave yet. I still wanted to do amazing things and I had some amazing things in my life going for me. With each ‘ new’ distance I gained, I built a sense of accomplishment and a quiet sense of pride began to develop. I re-enrolled in a yoga studio and began the journey of healing, re-teaching myself resilience and flexibility. Plus a ton of Immodium. I mean I had to leave the house sometimes, right?

During the healing journey, some ideas began to resurface. Some things I had wanted to accomplish when I was running before but never got too, either due to injury or life choices, were starting to come back. For a while, I ignored them. Focusing instead, on the journey ahead of me. Getting to the bottom of what was wrong with me and running. But these ideas wouldn’t sink back to the deep depths from which they reemerged.

I had always wanted to run a 50-mile trail race. My first attempt, I had to abort even before I saw the start line. I overtrained and ended up with post-tibial tendonitis. I could hardly walk, let alone run 50 miles. I finished my last 50k with it, limping to the finish line, but had to abandon running for awhile while it healed. But there was always this monstrous race that had my fearful attention. Never Summer 100k. It took place in the mountains in Northern Colorado, with close to 16k of elevation at an average elevation of 10k. You not only ran through the mountains but went up to 12k a few times as well. The cut-off was 24 hours. It seemed impossible to do. Therefore, it always remained on the outer edges of my ambition. I had always wished they would come out with a shorter version of the race… and my wish came true! A couple of years after the race’s initial inception, the race directors came out with a 60k version. I don’t know why lopping off 20 miles made it seem more doable, but it did. That doesn’t mean to say that it wasn’t still big. It was. It was still at an average elevation of 10k feet, you still went up to 12k feet a couple of times and it still had 8500 feet of vertical gain. It was still a monster. But it wedged its way into my brain and stayed there.

While I was fighting for my life and my health, I thought “ This is something I can do.” At that point, I was pretty much housebound and not eating, but hey, why not ponder about running a hard mountain ultra and thinking I could pull it off.

The turning point came for me about a week before my Christmas colonoscopy. I was at my neighbors’ house, we were drinking and talking. The talk came around to our health, she has an autoimmune disease and told me that between her medication and diet, its pretty well managed. Over a bottle of wine, she gave me details on this diet and the information stuck with me. I wanted to explore it after I got more information on what was wrong with me. I got my diagnosis a week after my colonoscopy and while I didn’t go on medication right away, I did do research into the power of diet and found science-backed proof of this diet. I had nothing to lose, I was not eating anyway, so what’s the harm? And if you stick with it, it works. I eventually did need to go on medication, but between that and the diet, I was finally out of pain, could think, and more importantly – run more.

With the thought of wanting to run Never Summer 60k firmly lodged in my brain, I began running like I was training for this. It was January and I was getting my life back. I was able to hit the trails and start running hills. It was March before I finally said out loud to my partner that I wanted to do this. Would he support me? Yes! He gave me his full support and, not fully knowing what I was getting into, I signed up for Never Summer 60k. GULP.

I did yoga, I ran with my dog, and I spent a copious amount of time preparing my food for my new diet. The curtain of depression was lifting. My gratitude came to replace it. While on the surface I had absolutely no idea if this was something I could pull off, I knew in my heart that yes, I could. I threw all my energies into this. I knew I was weak and I knew I needed a strong body to just finish this. So I remained consistent in my efforts and paced myself. Though the inevitable freakouts occurred, it never was enough to discourage my conviction about finishing this race. Along the way, I renewed old friendships and acquaintances and made new friends through the power of the trail running community. It seemed as if everywhere I turned, I encountered nothing but love and positivity about what I wanted to accomplish.

The weekend of Never Summer finally arrived. After 7 months of training, preparing my body from its weakened state to a much stronger state, I was as ready as I was going to be. I was ready to toe the start line of this monstrous mountain ultra race in the remote wilderness of the Northern Colorado mountains.

I pulled off, what seemed to me, the impossible. Due to my diet to keep me healthy, what’s normally available as fuel to other runners is not available to me. But, I had a plan. I had trained with what I wanted to use, and I had experimented. I knew what worked and what didn’t. I wrote out a plan with nutritional guidelines for myself and I stuck with it. My partner met me at the major aid stations and resupplied my water and food. He changed my socks for me, made sure I was ok, then scooted me out of the aid stations so I would make the cut-off time for the next one.

Summiting North Diamond Peak halfway through the race, in a hailstorm is something that I will never forget. Thunder rumbling in the distance, getting pummeled by pea-sized hail all the while climbing a near vertical ( 30% in spots) mountainside. North Diamond was the crux of the race, it topped out at 12 thousand feet and I don’t care who you are, it’s hard. I cried at the top, all the while feeling gratitude for myself, my body, and the volunteers up there cheering the racers on. Of course, I was crying as I ran over the finish line where the race director met me and gave me a hug, then my partner gave me a hug. I had done it. I finished.

I met my goal of finishing this punishing, brutally beautiful race. I thought I could, so I did.

Valerie’s happy place is with her partner and her dog in the mountains. She loves to travel, see new things and run new trails. Destination races are always on her radar! Valerie lives in Ft. Collins CO and is a native of Colorado. She loves the community of trail runners and what trail running brings to her life. She hopes to share a message of encouragement by educating others on autoimmune/ invisible illnesses and the healing power of food. Valerie believes that hard things are possible, you just gotta believe in yourself!!
More From Valerie Collins