Homepage / Community / Sharing is Caring… for The Trails

Sharing is Caring… for The Trails

Abigail Snyder is an elite-level mountain bike racer based in Roanoke, Virginia. Besides riding all the bikes all the time, she enjoys hiking with her dog, Kweli, and just being outdoors in the beautiful Blue Ridge Mountains. Abigail is a former middle/high-school English teacher and a current Data Science student at the University of Virginia. In addition to her studies, she works at the local bike shop, coaches the junior mountain bike team, and is a coach for cyclists wanting to improve their performance and/or skills.
More From Abigail Snyder 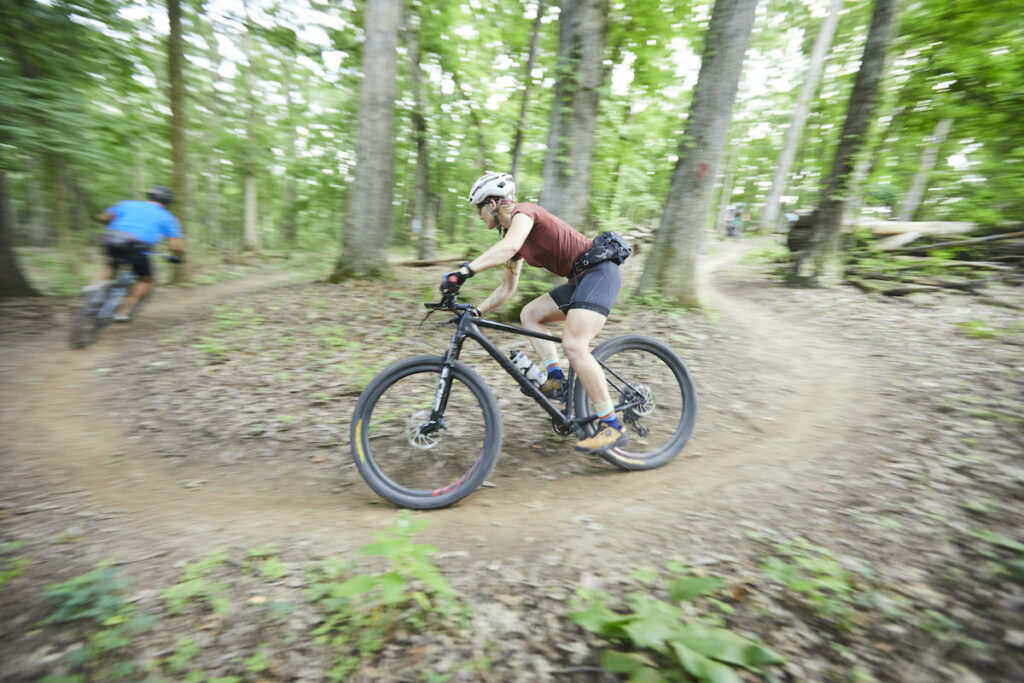 From kindergarten we learn that sharing is caring. As trail users, we recognize the “share the trail” moniker, with many trail systems marked clearly with “share the trail” signs indicating the order of yielding for equestrians, cyclists, and pedestrians. Still, somehow, in the moment, sharing sometimes feels a lot more like an interruption to our own enjoyment of the trails.

Several years ago, while mountain biking on a marked, legal mountain bike trail (in a locale where there were a number of hiking-only trails nearby), I was accosted by a hiker who adamantly insisted that bicycles ruined the trails and should be ridden only on pavement. This particular incident highlights the often-emotional conflicts between trail users that has unfortunate impacts on trail access for everyone involved.

This issue feels especially weighty to me right now, as all areas of U.S. culture feel increasingly polarized and aggressive. Just this year, I have participated in several races where course markings were actively changed by non-racing trail users, and found out yesterday that this weekend’s race, a longstanding hallmark of the East Coast mountain bike community, after 24 years, is being canceled at the last minute due to protests from local residents. My fear is that this is not limited to one mountain bike race in Virginia, but is indicative of a greater us-vs-them mentality with consequences for all users of trails.

At one time or another, I have identified as each type of trail user: in high school and college, I rode horses, now, I race mountain bikes, hike with my dog, and occasionally go for a trail run. When I step into each of these personas, the things that irritate one user or another are glaringly evident. As an equestrian, I’m irritated when runners and cyclists come up behind my 1,000+ lb animal without warning. Yet I am equally annoyed by runners and walkers not moving over when I am training on my mountain bike and just want to “get one single perfect interval.” On foot, the sheer speed of cyclists passing can feel frustrating and dangerous, even as I get bothered by having to step around piles of horse manure on the trail. This laundry list of complaints is by no means exhaustive and doesn’t even take into consideration the motor sports, hunters, or other trail users that we also share outdoor spaces with.

So the question is, what can we do?

Whether you identify primarily as a runner, walker, cyclist, equestrian, hunter, dog-person, ATV-rider, or other trail user, we must realize that we are far more powerful together than apart. The way to get more trails is not by squabbling amongst ourselves–it is by forming a community of people who love the outdoors–and the people we get to share it with! Only together will we be able to form any kind of real voice when advocating for the trail spaces that we love so dearly.

With that in mind, I propose that we engage in a bit of empathy next time we encounter someone else out on the trails. Ask, how would I feel  if I were in their shoes? Remember, equestrians really are a bit at the mercy of the enormous animals they are riding. That guy with headphones in may be just trying to find a bit of peace in a hectic, stressful situation. The cyclist who didn’t really slow down to pass may be just trying to make it home before dark. Who knows? It’s easy to project rude intentions onto others, but in reality, most people probably aren’t trying to be rude. A few years ago, I was in the final stretches of a mountain bike race when I came flying around the corner and saw a woman pushing her stroller down the mountain bike trail. As I slammed on my brakes and skidded to a stop, I was initially angry–the trails were marked as closed for the day for this event–but, still, I tried my best to politely ask her for room to pass before pedaling away and finishing the race. Later, upon reflection, I realized that I had probably terrified her when I came screaming around that corner and that she likely had not seen the signs closing the trail–she was probably just as angry with me (and any other racers she encountered). Regardless of which role we fill on a given day, it will be better for everyone if we can give grace, be patient with each other, and make room for everyone on the trails.

Too, it is important to realize that some trail users may be new to the trails and don’t know the accepted trail etiquette. Especially through the COVID-19 pandemic, there are a lot of new trail users. Instead of being irritated that our spaces are more crowded, we should be welcoming these new runners/walkers/riders/etc. back into the great outdoors. Being scolded or pushed aside by other trail users never feels welcoming, which is why trail etiquette is best taught gently, by modeling the behaviors we want to see in others.

Finally, SMILE! No matter how inconvenienced we are by another trail user, a million tensions can be assuaged with a little kindness and a smile. I’ve honestly found a lot of joy in practicing maximum enthusiasm upon seeing others out enjoying the outdoors–especially other women! Just a positive “hey!” or “have a great day!” or “enjoy the run!” can make interactions on the trail more fun for everyone–and the best part is, you might meet a new friend!

Sharing the trails is caring for the trails–and making them a better, more enjoyable, more accessible place for all of us!

See you on the trails!

Abigail Snyder is an elite-level mountain bike racer based in Roanoke, Virginia. Besides riding all the bikes all the time, she enjoys hiking with her dog, Kweli, and just being outdoors in the beautiful Blue Ridge Mountains. Abigail is a former middle/high-school English teacher and a current Data Science student at the University of Virginia. In addition to her studies, she works at the local bike shop, coaches the junior mountain bike team, and is a coach for cyclists wanting to improve their performance and/or skills.
More From Abigail Snyder