Homepage / Community / It Takes a Crew

Kristin Sara currently works in juvenile justice. She is a firm believer in giving back to the community. She lives in Western Massachusetts with her daughter and one very fluffy rabbit. Kristin volunteers whenever she can and really love being out on trails.
More From Kristin Sara 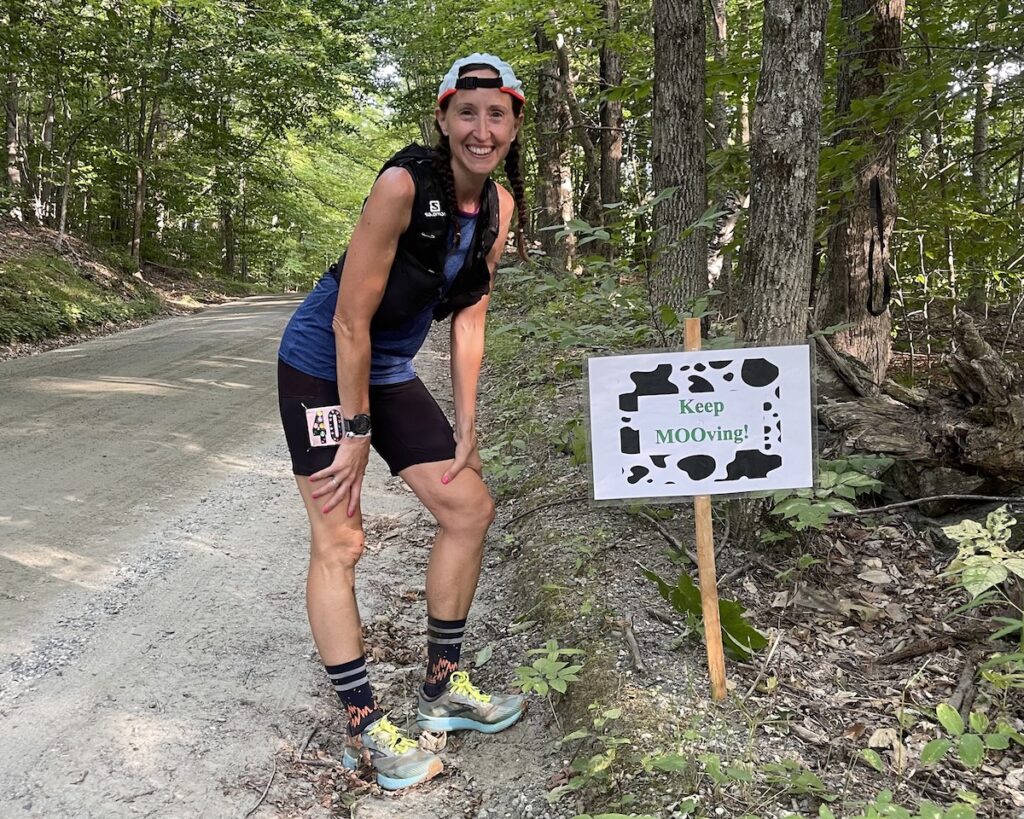 “I think I’ll just switch to the solo division,” I blurted out. “It’ll just be easier for everyone.”

I was a few weeks out from my very first 100k and pulling together a crew and pacers was all of a sudden more daunting of a task than the training had been. The race I was signed up for required COVID vaccines, which eliminated one very good friend. Two others would be away for work, and three were injured. Other friends had big roles already that weekend, as they were either directing the race or serving as committee members. I was struggling to ask anyone to give up a huge chunk of their weekend to drive to another state and follow me around. Heck, I didn’t even know if I’d finish. I began to think I’d just go solo so as to not burden anyone else.

But then a friend, the husband of a training partner and a very experienced and accomplished ultra runner, set me straight. He told me that there was no way in hell I should go solo in my first attempt at a race of this length. He explained training mostly on my own was not the same as running the race alone, that I would absolutely regret it, and that I wasn’t actually burdening anyone: I was offering them a very cool opportunity.

He had pulled the old “it’s all in how you look at it” mindset switch on me and he was absolutely correct.

I appreciated his words and I knew he was correct. Crewing and pacing and volunteering at races are some of my absolute favorite things to do. I even serve as the coordinator of volunteers for a bunch of local trial races. I know the joyful power that community brings to races, so why did I feel like I wasn’t worthy of some of that?

Asking for help has never come easy to me, but in the last few years I’ve had some forced practice in it. As a single mom with full custody there have been so many times when I’ve stubbornly put my head down and proceeded on my own. I run the bulk of my miles at 4 am on my second hand treadmill while my daughter sleeps, then work all day at a high-stress job before coming home to tackle all of the cooking and cleaning and homework and parenting and errand-running and chores of daily existence. And I do it all on my own. It all takes a significant physical toll, but it’s even more of an overwhelming mental and emotional load. It’s usually when I find myself completely depleted and either sobbing or rage-cleaning that I realize I haven’t reached out for help in far too long. So naturally when I added “tackle my first 100k” to the list, I knew things would have to shift. While I wasn’t always successful in finding childcare and I did end up doing a good number of long runs on my creaky old treadmill, I also was able to find friends and family who would hang out with my daughter while I slipped out to the trails for some solid training.

So I took a deep breath, reminded myself that I’m worthy of support, and reached out to that same circle of family and friends in hopes of putting together a team to be there for me at the race. This time, I got enthusiastic responses from those who were able to be there. My mom eagerly offered to have some quality granddaughter time and two friends who were on the mend from injuries volunteered to be my loyal crew. Pacing was still iffy but the outlook for my race was ever-so-much-more optimistic.

I pieced together a race plan and explained to my crew that I could be self-sufficient in the early few miles if they wouldn’t mind jumping in around mile 20. I didn’t want them to have to give up the whole day and sacrifice sleep. They politely, but firmly, pushed back; they would be there at the start and would be along the course all day long, no matter how many hours it took me to finish. The support was so overwhelming that I cried with gratitude.

A third friend reached out, asking if she could pace. She would be up there coordinating the volunteers for the entire weekend but would love to jump in and share some miles if I needed her. Amazing!

Race day arrived and I crossed the starting line with my crew cheering and filming. I remember promising not to go out too fast so that they’d have time to get some coffee, and then completely blowing that promise by clicking off some much-faster-than-planned early miles. It didn’t matter; there they were at the first and second and third crewed aid stations, cheering and dancing and not minding my steadily-sweating body. But it wasn’t just my crew: I ran into the second aid station and straight into the arms of the race director (a very good friend and supporter of my training for her race). A friend working in race media was there too. I was buoyed by their support and encouragement. I trusted my training and my coach. I appreciated each and every volunteer who chose to be out there just to help us runners. I was surrounded by so much generosity and I was determined not to take one single moment for granted.

I had one of the best days of my life. When I came into uncrewed aid stations, the volunteers treated me like I was the sole reason they were there. When I realized I hadn’t urinated in an alarmingly long time, my pacer (also a registered dietician) calmly offered me valuable advice. When I came into crewed aid stations way ahead of predicted times, my crew cheered, took care of me, seamlessly adjusted, and texted updated to my daughter at home. Late in the race when we passed a struggling runner, my pacer immediately began digging into his pack to offer her supplemental nutrition. As the miles clicked off, my energy switched from outward exuberance to quiet fortitude. My crew noted it and continued to take care of me like there was nothing else in the world they’d rather be doing. The selfless support of so many around me carried me to the finish line and I crossed with an empty tank and a full, grateful heart.

My daughter is, and always will be, my first priority. I also recognize that I am a much better mom when every so often I get a day like this to slip away and run free. To my friends and family and the volunteers, it was one crazy day of supporting runners; to me it was validation that what I do and who I am matters. I will forever be grateful for everyone who helped get me there. If you ever get the chance to crew or pace or volunteer, I hope you do. It’s an incredible gift that you can give to others.

Kristin Sara currently works in juvenile justice. She is a firm believer in giving back to the community. She lives in Western Massachusetts with her daughter and one very fluffy rabbit. Kristin volunteers whenever she can and really love being out on trails.
More From Kristin Sara