Alissa Keith grew up in South Dakota but has been living, running, and teaching in Virginia for the past two decades. She’s a mom to 4 kids, who all think it’s very normal for people to run 30, 50, 100 miles at a time. Her hobbies include adventuring on the trails, making matching t-shirts, researching college writing and/or adult language acquisition, collecting too many soapboxes, and recommending podcasts to anyone who will listen.
More From Alissa Keith 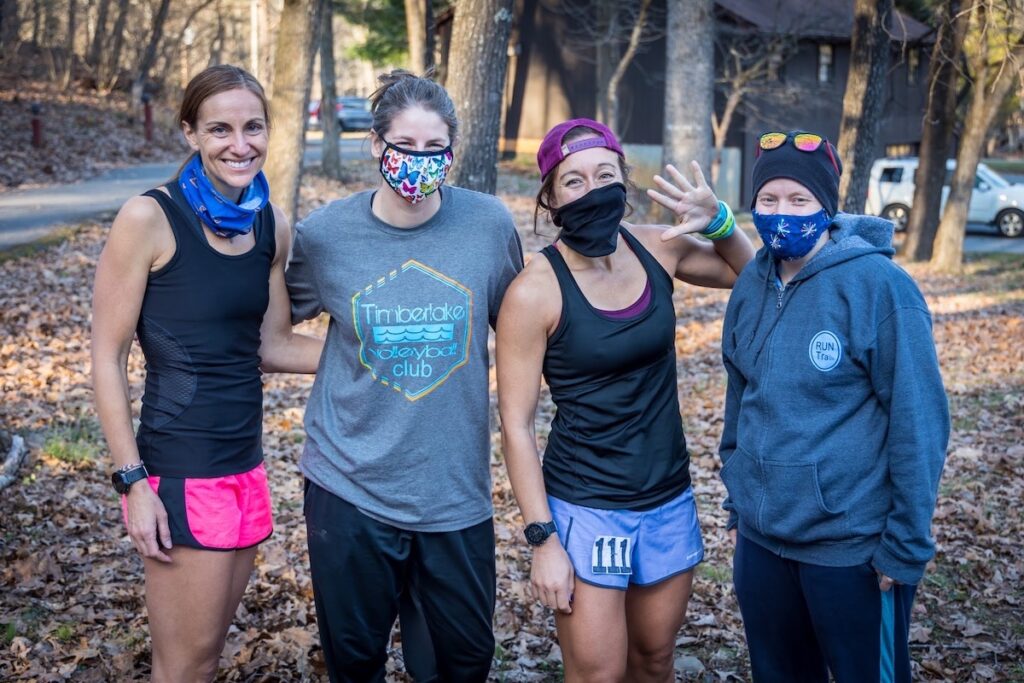 I came into the mile 46 aid station of my 66.6 miler defeated. I’d spent the past 20 miles or so questioning my life, who am I, why do I do this, and why am I running so slowly when my effort feels so high? But, as I came around the final turn into the aid station, I saw my pacer standing there, and all she said was “It’s fine. You’re fine. Let’s go.” I didn’t really want to go. I really wanted to curl into a ball and die, but I had the time, and I had a pacer who had taken the entire day to pace me, so it felt like the least I could do to at least try.

My crew gave me the only thing I could keep down – sweet tea – and sent us back into the woods to finish the race. As I trudged the arguably-not-that-steep-but-felt-steep-at-the-time climb out of that AS, my pacer said “it’s fine” about 1000 more times and began chattering about the day, the people she’d seen, the crazy stuff that happens at aid stations. And, it happened: she pulled me out of the depths of despair, and soon I was running again. Not fast, but not trudging. I even began to feel . . . happy. The mix of the sweet tea calorie boost and the companionship got me out of my head and back on track. She talked me over climbs and through the swoops in the trail that I thought would never end. We saw the gorgeous views of the afternoon and ran to the finish line just as the sun had set, and I was so thankful for the journey and for my pacer for making it fine.

But, [record scratch] how did I even get here? Great story; I’d love to tell you. The year was 2010; I had just had my second baby, and I’d been diagnosed with postpartum-depression. Along with medication, I was prescribed to “train for something” to help navigate the layers of life stresses, depression, anxiety, and omg the laundry. And, so, like any normal person would do, I signed up for a marathon about 6 months away and trained diligently for it. I met up with one friend consistently for every.single.step of that training block. By the time race day came, I was pregnant again, and by the time I crossed the finish line, I was hooked on long distance running. My diligent training partner and I knew we needed more running buddies, and, thus, created the No-Pressure Running group. The note at the top of the Fb group said, “We run for fun; no matter your experience or goals, you’re welcome here.” The rules were simple: no Debbie Downers, no gossipping, bitching, or backstabbing. And, the “no runner left behind” policy meant women who were run-curious could join us and not worry about getting paced-shamed or dropped in the dark.

The NPRG grew pretty quickly, and we spent the next years running early-morning Starbucks runs, laughing, sharing life, dressing in ugly Christmas sweaters for our yearly Christmas eve run, and, very importantly, making witty matching tank tops. These were happy miles as women set new goals and broke their distance records, sometimes inadvertently, when I was sure the end was “just up around that curve” when it was definitely 2 miles further than I thought it was, but it was always fine. Sometimes I convinced people to run their first half marathon at a super technical tough trail race, but of course, they were fine!

Eventually, though, the official No Pressure group started to dwindle. My co-founder had moved away, and many women had come, stayed for a while, and moved away or moved on to stay at home with new babies or to try new things. But, a core group remained. By then, our friendship had transcended running, and the running part became more of a “how did you all meet each other?” story than the thing that held us together.

These past few years, they’ve become “my people.” Our group texts have ranged from joy to pain to new stages of parenting. We ask each other for advice and for a listening ear and for a “oh crap, does anyone have a pair of pants that fits my 11-year-old for their concert tonight?” And, then, when the schools shut down – half of us teachers, all of us with school-age kids, all of us with jobs – we figured it out. We texted our thoughts and fears and concerns. We respected each other’s space and kept our chitchat to digital spaces until we could get together again and sit around a campfire, laughing and crying and convincing each other to seriously just buy the instant pot already. These are the ones who will make me an emergency race bib in the middle of the night when I’ve lost mine. They’re the ones who will answer “absolutely, I do” when someone texts “Wanna hear something gross?” These are the girls who have literally paced me through my ultraraces and have figuratively crewed me through this past decade of life.

We all know the old saying “Life’s a marathon, not a sprint,” but I realized that friendships are often like our aid stations as we walk, run, and sometimes trudge through life. They accept you at your most authentic self – dirty and happy and broken and bleeding – and offer you a place to rest, cry, refresh and get yourself together all while shoving grilled cheeses in your mouth and refilling your bottles with sweet tea. And, most importantly, they’ll tell you “It’s fine. You’re fine” until it eventually becomes true.

Alissa Keith grew up in South Dakota but has been living, running, and teaching in Virginia for the past two decades. She’s a mom to 4 kids, who all think it’s very normal for people to run 30, 50, 100 miles at a time. Her hobbies include adventuring on the trails, making matching t-shirts, researching college writing and/or adult language acquisition, collecting too many soapboxes, and recommending podcasts to anyone who will listen.
More From Alissa Keith