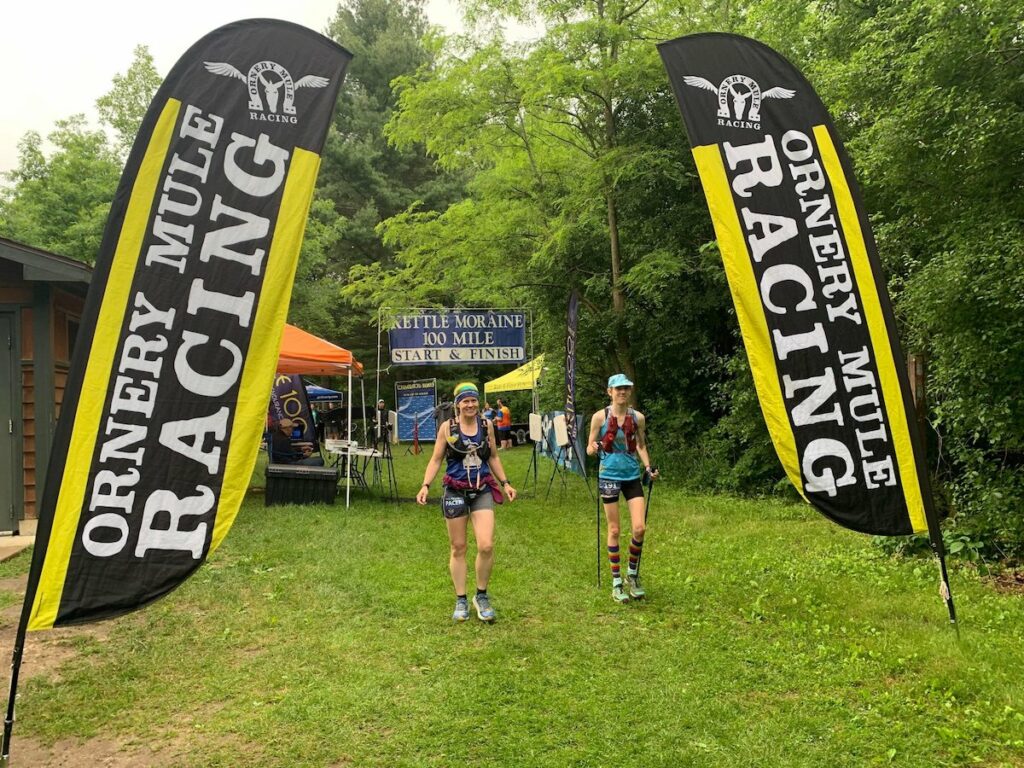 “Recovery Time Delayed. A high level of activity slowed your recovery. You may want to take it easy until you’re fully recharged.” My Garmin sent me this very helpful message the night before the Kettle Moraine 100 this past June, which was to be my big comeback race after giving birth to my daughter the previous summer. I was not amused at the time. It was 8pm and we had just settled into our hotel with my race packet and take-out from Chipotle after 9 hours of traveling from Minneapolis to Whitewater, Wisconsin. This was our first time taking our newly mobile daughter on a longer car trip, and we had drastically underestimated how often we’d need to stop just to let her run around! We joked that we should have signed her up for the race as she bounced off the walls of our hotel room while we desperately tried to get ready for bed.

I finally did get to sleep, but the 4am alarm came far too early. I was full of nervous energy, but also…tired. How was I going to stay up all night running when I was already exhausted? I tried to shut down those thoughts and just focus on the race. It was nice to see and chat with a few friends from my time living in Madison at the starting line. Before I knew it, we were off. And I had no idea how to pace myself! Although I had hired an excellent coach and trained well despite adjusting to the demands of new parenthood, it had been 6 years since I’d run my only previous 100 miler (Javelina Jundred) due to various injuries, the pandemic, and pregnancy. As it turned out, this race would unfold in a similar pattern to the first.

I settled into a pace that was undoubtedly a little too fast, and I knew it, but kept me running with a couple folks I enjoyed chatting with. I always seem to have difficulty quieting my mental chatter while running an ultra until I really get into the pain cave—which is not great for 100 miles, as you don’t want to be in the pain cave too early! It’s something I need to work on. Nevertheless, the first 100k went well, with some mile low points due to humidity, and some high points (seeing my partner and daughter at a couple of the aid stations!) I was diligent about taking in liquids and fuel. Dreams of a sub-24 hour finish were dancing in my head.

As I came into the 100k mark (this was also the start/finish line), I had a chance to regroup, change socks, get my headlamp and poles, pick up my pacer, and get ready to finish the race overnight. I remember drinking some water that tasted a bit off (probably high iron content, as is common in the Midwest). I also had a few sips of a coffee drink with some dairy in it, which I don’t usually have, but I was already feeling a little sleepy. Although I was tired, I figured I would start taking my caffeine gels and that would give me the boost I needed to finish strong. I set off down the trail with my pacer and ran/hiked strongly for a few miles. As darkness set in, I tried to take a gel—and immediately puked. “No worries,” I told myself, “puke and rally.” Unfortunately, the “rally” part did not happen. As the night continued, my condition , and I found myself unable to take in any liquids or fuel for long stretches of time. We tried gingerale, broth, everything, but it all came right back up. Finally, I decided a nap might be the trick, as that had cured me of similar issues during Javelina all those years ago. I was also practically falling asleep on the trail, to the alarm of my pacer, so my crew all decided this was the best idea, and set up a space for me in my friend’s car (my family had gone back to the hotel to sleep at this point). I fell into a deep sleep for about 45 minutes, and felt somewhat refreshed upon waking. I knew that I just needed to get through a few more miles, and then my partner would be pacing me. I hoped my nausea issues were over, but it turned out they were not.

But this is where I noticed a shift in my mental attitude compared to Javelina. When things got difficult there, I had decided to quit, despite being well ahead of cutoff times. Only my crew had convinced me to keep going, but I hadn’t been on board until I physically started feeling better. I didn’t have a strong enough “why.” But at Kettle, I never really entertained quitting. I was disappointed that my sub 24-hour goal was slipping away, and that all I could do was walk (my body was done running due to lack of energy). Instead, I was in problem solving mode, trying naps, various combinations of drink/food, etc. I WAS going to finish this race, and I’d like to say something eloquent for why, like re-establishing my identity as a runner, setting an example for my daughter, showing her she can do hard things, etc. And maybe these were the reasons, but they weren’t present on a conscious level. It was something much more basic, more like, “this is what I came here to do today, and I CAN finish this, so let’s keep going.” Research shows that the brain changes in profound ways when you become a parent, in ways that allow you to focus intensely on what’s most important—typically the safety of your child. Knowing my child was safe and well-cared for by her dad, perhaps I was able to channel this “New Mom Strength” for a different purpose.

We finally got to the point where my partner was going to “run” with me as daylight was breaking. He had arrived 4 hours earlier based on my previous pace, and had been sleeping in the car. I’d like to say we had a beautiful morning of bonding during those miles, but mostly I was just super crabby and wanted to be done (D, you are an amazing human). The feeling at the finish was more relief about being done than any profound elation or sense of accomplishment–but looking back, I do feel a deep sense of pride as well as gratitude. Reflecting on the race, it dawned on me that as a mid-30s parent with an intense job and a young kid, it’s going to be awhile before I’m perfectly prepared or well-rested before a race—by that time I’ll probably be slowing down due to age! But that imperfection, for me now, is part of the fun—since becoming a parent, I’ve learned to approach each race by asking myself “what can I do with what I have and who I am today?” The answer to this question will be ever-evolving, and I’m excited to find out the answers.