7 Signs of an Exercise Addiction

Hannah is an outdoor fanatic from the Midwest who went from first-grade “Fun Run” champ to collegiate distance runner. Currently, Hannah is a trail runner and hiker who—much to her husband’s confusion—enjoys early morning runs with the most elevation gain possible. In addition to outdoor adventure, Hannah loves writing, reading, practicing Spanish (she’s functionally fluent), advocating for mental health awareness, and discipling others in their Christian faith. Connect with Hannah on Instagram (@hanwoodhouse) and follow her adventures at agratefullifelived.com.
More From Hannah Woodhouse 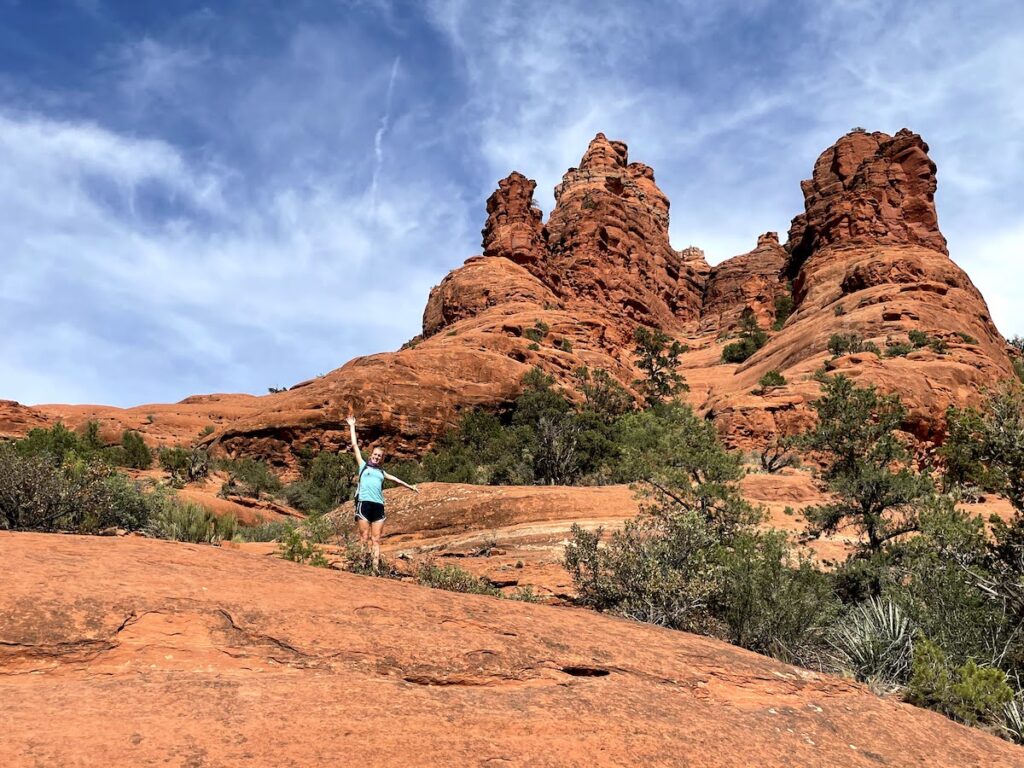 When I first was diagnosed with an eating disorder at 17, I felt completely alone. My “challenges” became the elephant in the room of nearly every gathering with friends or family.

I had an eating disorder. No one knew what to do.

Ten years later, I am incredibly thankful for the support and care I’ve received from various friends, family members, and clinicians. When some “experts” said I would likely not survive—and certainly wouldn’t ever competitively run again—my team has fought for me and held hope even when I have not. But I often wonder how things would have been different if more family members, friends, doctors, teammates, and coaches would have seen the signs of my eating disorder and exercise compulsion.

This article will cover signs of exercise compulsion but is far from exhaustive. I am speaking from my experience and am not a licensed clinician–nor can I possibly explain all the nuanced warning signs of compulsive exercise. Now that we’ve covered all that, let’s dig in.

Exercise compulsion/addiction is a specific struggle within many eating disorders and is sometimes called “anorexia athletica” (though not listed as such in the DSM-5). If you’re concerned that you or someone you love is struggling with exercise compulsion, I encourage you to familiarize yourself with the following signs.

Routines are incredibly beneficial, but only to the extent that they enhance rather than confine our lives. If an individual refuses to switch up their routine or is in severe distress when the routine is interrupted, that’s a key sign that their reasons for exercising are not serving them well. Life happens; that means sometimes we run at different times, workout on a different day, hike with a friend who’s slower, and, yes, sometimes we take an unplanned day off to rest or play.

That is healthy, and it’s a skill that even the most elite athletes practice. You and I need to be able to do that as well. Movement is an aspect of our identity, not the entirety of who we are. Balance breeds joy and success. I promise!

2. No or little downtime

As I mentioned in point #1, sometimes life demands that we take a breather and prioritize other aspects of our mental and physical health. If your loved one is going from one activity to the next, this may be a sign that they’re attempting to distract from mental chaos or that they are completely operating in rigidity with their body.

Some people (myself included) genuinely love being active. The concern arises when individuals have no downtime–often in contrary to the hobbies and leisure time they used to enjoy. Training for a bucket list hike absolutely necessitates commitment, but that commitment includes proper rest. If someone decides to run, bike, walk, lift, and sleep in continuum: there’s an issue. And as I’ll continue to address, this pattern has consequences.

3. Inability to listen to the body’s needs

Our bodies were created to rest. When we deny them that need, they can’t keep up.

As a collegiate distance runner, I was often bewildered as to why I often had one injury after another. Even though I had restored weight by my junior year, I was still constantly dealing with signs that my body was tired—mental burnout, muscle injuries, nerve pain, and three stress fractures.

But I didn’t slow down. I was consumed with my many rules. During the season, I was constantly running, hiking, lifting, or standing. In the summer, I’d go on long hiking trips–without decreasing my mileage or increasing my caloric intake. I couldn’t fathom taking a day off or asking for help.

Now that I have asked for help and let my body heal, I see why my body and brain were so broken down. Balance, joy, and ongoing therapy are allowing me to have more fun with hiking and running. What’s more, I have energy and am performing better as an athlete. Crazy, right?!

My mentally ill brain couldn’t conceptualize that; my recovering brain is preaching it from the rooftops: Our bodies are designed to tell us what they need if only we’ll listen!

There is a point of awareness in every person’s mental health journey. I had multiple of them, and each one challenged my identity. I wasn’t ready to fully surrender though, so as soon as I and others began to see the problems, I hid.

Increased isolation and deception are key indicators of a mental health battle. As we say in treatment: eating disorders thrive in secrecy. Exercise compulsion—which is most commonly seen in individuals who also have an eating disorder—is no different. Frequent and unexplained disappearances, canceled plans, and increased alone time are possible indicators that someone is compulsively exercising. If you notice these signs in yourself or another, I encourage you to be curious as to why and consider broaching the topic with a mental health professional you trust.

5. Prioritizing movement above other values

As an echo to point #1, I want to stress that addiction is not analogous to commitment. When an individual is battling an exercise addiction or compulsion, they become singularly focused on movement. Everything revolves around movement, so much so that other values are disregarded along the way. Because of exercise compulsion, I skipped far too many weddings, birthdays, dinners, and gatherings to remember. I did it all in favor of a hike, run, or gym sesh. That’s not normal, nor did it improve my performance. In fact, it distanced me from values I deeply ascribe to such as loyalty, relationship, honesty, and zest.

If nothing supersedes training or movement routines, they aren’t routines. They’re rituals, and they aren’t serving us well.

There’s nothing abnormal about upticks in training and a spontaneous hike here or there. But if your loved one (or you) only allows the pendulum to swing one way—toward “more movement”—that is a problem.

During the height of my struggle, I fluently rationalized to my therapist how four runs a week was “practically the same” as the seven runs, daily hikes, and twice-a-week lifting that I had been doing. Over time, I had added training and the thought of decreasing (even a little) was incredibly distressing.

7. Not fueling or refueling properly

I put this one last because it’s often viewed as the only indicator of an eating disorder or exercise addiction. It’s not. Let me be clear: there are many individuals who appear to have normal nutrition habits but are not at peace in their bodies. What’s more, “normal” is difficult to perceive from the outside. So, just because someone (female or male!) looks like they are eating and they appear to be at a healthy body weight, doesn’t necessarily mean they’re healthy. Nutrient deprivation can be hard to pinpoint, as our bodies are hardwired for survival. If the body isn’t getting enough nutrition to function, the brain will resort to a caveperson mentality (“Sick Enough,” Gaudiani) to survive. This can lead to numerous issues that are harder to spot, such as bone density loss, RED-S, poor digestion, depression, and anxiety.

When I was struggling with exercise compulsion, my body was not receiving nearly enough nutrition to account for my activity level. I was constantly breaking my body down, and limiting what foods I was “allowed” to have. Over time, it began to show. But the effect wasn’t limited to my body weight. Not fueling properly negatively impacted my appearance, my grades, my running, my energy levels, and so much more. To many, I appeared to be a thin, strong runner, but I was scientifically starving, largely because I could not stop exercising. My behaviors led to multiple injuries, mental anguish, and illnesses (see #3).

So where do you go from here? If you or someone you love is exhibiting these signs, how can you find help?

If you are the one seeking help, let others in. Trusting others has been the most impactful part of my recovery journey so far. Don’t underestimate the power of community.

If you are reading this with the goal of helping a loved one who has an eating disorder or exercise addiction: consider bringing up your concern—speak in love and use “I statements.” Above all—whether you are a fighter or supporter—do something.

I recommend utilizing resources from the following organizations:

Hannah is an outdoor fanatic from the Midwest who went from first-grade “Fun Run” champ to collegiate distance runner. Currently, Hannah is a trail runner and hiker who—much to her husband’s confusion—enjoys early morning runs with the most elevation gain possible. In addition to outdoor adventure, Hannah loves writing, reading, practicing Spanish (she’s functionally fluent), advocating for mental health awareness, and discipling others in their Christian faith. Connect with Hannah on Instagram (@hanwoodhouse) and follow her adventures at agratefullifelived.com.
More From Hannah Woodhouse