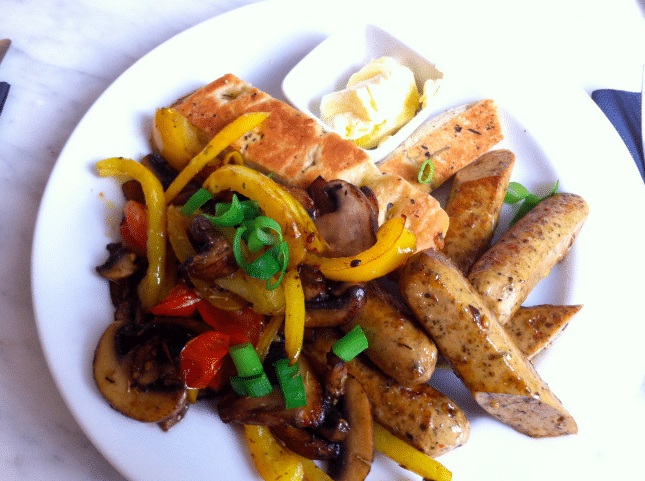 I have always been an independent person.  I don’t like asking for help, I like doing things on my own.  I also happen to be vegan.  For me the combination has worked out because as a vegan in a land of meat eaters you might end up having to bring your own food to the cookout, you might not be able to split dessert with your girlfriends at the restaurant, and it helps not to care about everyone’s opinion of your eating choices, because many of them are going to have one.

Then I started ultra-running and realized depending on other people for food in the middle of the woods is kind of part of the deal.  I’ve been at races where the race director’s wife is making everyone vegan banana pancakes at 4am, but not every race is going to be like that.  And although there is almost always something vegan at each aid station, here are some tips I have found are helpful in navigating race-day fueling as a vegan.

The time to find out if a particular gel or bar is vegan-friendly is not when you’re holding it in your hand at an aid station.  Do some research on line to find out what products are vegan friendly and which definitely aren’t.  It will take away the guess work, especially late in the race when your ability to decipher labels is a little fuzzy.

When I come into an aid station I announce “I’m a vegan”, and not because I want to feel morally superior to the meat eaters or start a debate on protein.  I’ve found that aid station volunteers are generally there because they want to help you (who would’ve guessed) and the more information you give them on what you’re looking for the better.  Not to say it works 100%, I’ve already had my announcement replied to with “We have bacon, you want some bacon?”

Reach out to the Race director

In general, ultra-runners are a pretty cool group of people who like to help each other out and encourage others to discover joy in the sport.  Most race directors are either ultra-runners themselves, were at one point, or at least appreciate the culture.  That being said, if you’re nervous about what your options will be on race day, most race directors would be happy to answer questions about vegan options at aid stations.

Back to the self-reliant bit, it’s never a bad idea to bring at least some of your own food.  You can carry it in your pack, put it in drop bags or leave it with your crew.  This guarantees you have some food that you know works for you, and you can use it to supplement what you find in the aid stations.  It also allows you to test out foods on your long runs and use those during races.

Ultimately, I find veganism and ultras are both lifestyles that can be quite complimentary.  In the races that I’ve ran I’ve even found the ultra-community to be more understanding of veganism than the population at large, maybe because both lifestyles are a little outside “the norm”.  If you know your reasons for why you’re pursuing both, and are willing to put in a little extra planning, you’ll be able to navigate race day fueling.  Look for the support of your vegan and ultra communities, look into some of the great books and resources out there by other vegan athletes, and if you need a sister to chat with about it feel free to hit me up online.