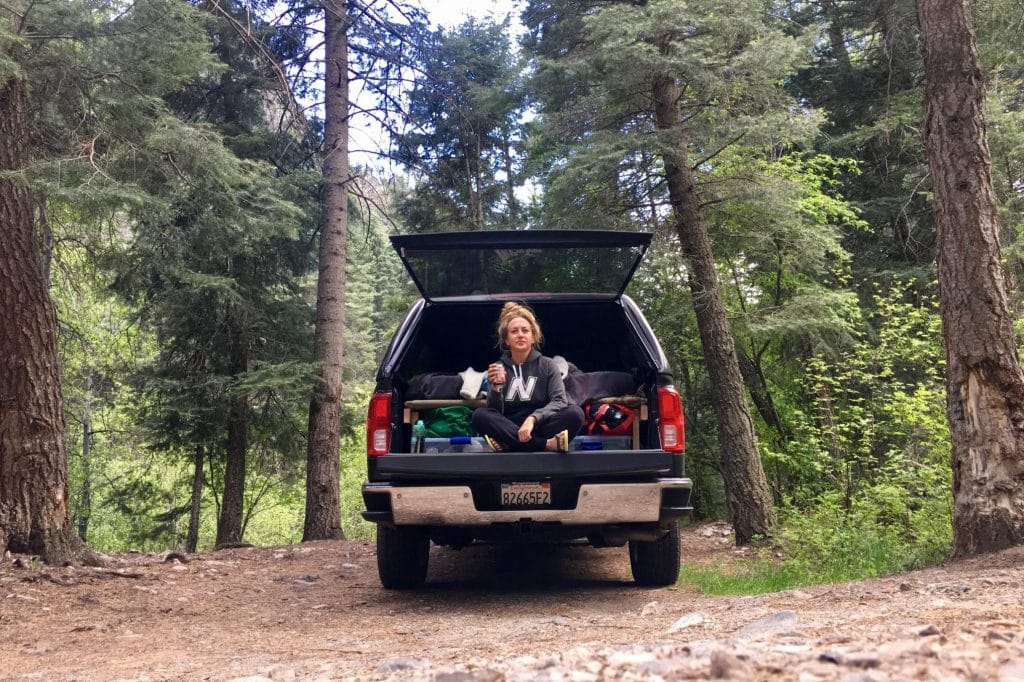 This January, my husband and I moved from Los Angeles to a town without a stoplight.  But this isn’t your typical city-hater, middle finger to corporate America story. As a woman who “did it all,” I’m finding that the transition to a life I’ve always wanted is bringing up an emotion I never expected.

So, like I said, we didn’t quit our jobs, sell all our belongings, or develop a catchy hashtag for our life.  Well, that’s not entirely true. I quit my job, but it was only because Dom (husband) accepted a better job for himself that would allow us to move to our cabin in the San Gabriel mountains full-time.  I worked remotely and commuted back to LA for a few months to finish out projects with my advertising agency, but have now transitioned to being a freelance creative and my own boss.  And for my first item of business, I’m giving myself three months off work to get my life together.

Luckily, all it takes is a quick scroll of the Insta to let me know what that should look like for an educated, motivated woman.  And for so long, I’ve been contributing to that feed.  Demanding career, healthy relationship, dedicated training, volunteer, gigs on the side, rebuilding a home alongside my husband – I was a pregnancy away from checking all the boxes. I’m proud of that life and I’m grateful for where it has brought me, but if you want the honest-to-god truth on how I’ve felt about it all, the answer isn’t happy. It’s a bunch of words with “over” in front of them.

As such, I always pictured that my newfound freedom would come as a relief.  I’d have space to work on our home, train properly for my summer races, catch up with friends and family, write more, make things, select photos from our wedding that was now over a year ago. I’d finally come up for air. While this is all true, the prevailing emotion isn’t one of contentment. You see, I haven’t “empowered myself” by going off the grid and started #livingauthentic.  And I’m not balancing a career, plus family, plus training for a 100-miler, plus selling beauty products to my Facebook friends, plus managing an Etsy store, plus something else, because there always has to be something else. Me? I’m somewhere in between, which somehow feels less than. Not good enough. Because I was Superwoman. And now that I’m not doing all of the things, all of the time, I don’t know who I am.

The Myth of the Superwoman really began sometime after World War II, as women in our country began entering the workforce.  Propaganda encouraged the housewife-career gal hydra, because our economy needed it. Unsurprisingly, many women found their new purpose exciting, and their bacon contributions empowering.  Now, I’m going to fast-forward through history a bit here but what logically followed was the fight for women’s rights, the demand for equal pay, the ongoing struggle to make our country’s perception catch up to the position our gender holds, otherwise known as the feminist movement. And here we are, wearing pussy hats through the streets of Washington DC.

I was part of it, man. I was underpaid, passed for promotions, sexually harassed, told that women “just aren’t as funny,” and we don’t make good managers. And that was just one side of it. I was also judged by my own gender for not keeping a better home, for showing emotion in the office, for not having as ideal of a runner’s body, for being so traditional as to change my last name. I fought the good fight. And now, as I take a step in a new direction, it feels like I’m giving up.  In a political climate where women’s rights are in the forefront perhaps more than any other time in history, deciding to take off my cape and do less feels like anti-progress.

Of course, if I’ve learned anything in life, it’s that any time you feel like you “should” be doing something or be a certain way, it’s likely all bullshit. The only thing you “should” be doing is taking a closer look at who exactly is making these demands and why you feel the need to comply. Though it sucks to admit, that “who” is likely yourself. You’re an adult. And one of the best parts about being an adult is that you don’t have to eat everything you’re being fed. They can spin you a wonderful tale of antioxidant filled superpowers, but if you don’t like the carrots, don’t eat the damn carrots.

Really, it’s the “should” mentality that got us here in the first place.  Most of the amazing women in my life are, by nature, kind, committed and selfless. We want to be all things to all people, and would just as soon take on too much, shuddering at the idea of the burden falling on someone else.  We help out, stay late, give extra, keep the peace.  Perhaps we compare a bit too much, but we often use those comparisons as personal challenges to better ourselves.

It’s what makes us amazing creatures, but it’s also what makes us so vulnerable. The world knows how to get more out of us because they’ve studied us. And lady friends, that’s why they’re selling us Superwoman. They’ve told us we can have it all, so we want it all. And because we’re women, we want it all to be perfect.  As someone who built a career in advertising, trust me, this is the greatest ad of all time.

By now, we’ve all heard the story about diamonds, their actual worth and how they came to power as an engagement ring, right?  Or how about the housing crisis of 2006? We’ve been duped before, America.  Or how about the one informing us that Beyonce has the same 24 hours in a day as you do?  Well, I’m going to go out on a limb here and assume that your, ahem, situation isn’t exactly the same as Beyonce’s. No disrespect. But my god people, stop comparing yourself to Beyonce. YA AIN’T BEYONCE.

So here’s an idea: what if you just decide for yourself how you want to do life? With each passing year, I discover more and more what is really worth my time, and what isn’t. And I’m also growing more comfortable and confident in the fact that my ratios of importance are going to be different, and some of them may be atypical.  An old friend may scoff, a new friend might turn up their nose, my mom may give me a healthy dose of Midwestern nice with an, “oh that’s an interesting choice.” But it’s my life. And I don’t want to spread myself thin, just to check all the boxes.  Instead, I’m making an active choice to do less, so I can do more in each area.

Husband, family, financial responsibility. Nature, discovery, creative growth. Community involvement, disciplined running, meaningful work. That’s my list right now. These are the areas I’m prioritizing, and as hard as it may be, I’m letting the other stuff come in second.  For me, it’s working hard and creating great things, but not necessarily climbing a corporate ladder and making the six-figure salary.  It’s being important to the people I care about, not universally important in society. It’s not necessarily being the best at something, but know I’ve actually given my best, without the excuses.  When I write them like that, they initially look weak. Mediocre. Complacent. But I’m coming around to the idea that in reality, they are the exact opposite. Maybe doing it all was the very thing that gave me an excuse for mediocrity.

As I finish writing this, I’m less than a week into a two-month training trip.  I’m not taking any work, sleeping out of my truck and trying to give myself the time and space to complete my dream race this summer: the Hardrock 100.  My husband is at home, training for his own races, while maintaining his full-time job as an aerospace engineer. I feel guilty.  He feels happy for me, and is glad I’m taking the time to do this before hopefully heading into the next phase of life: parenting.  The juxtaposition is helping me realize that part of my whole problem is this feeling of losing my self-reliance.  But I’m married now.  Self-reliance now comes as a unit where we aren’t assigned tasks by our gender, but rather what amount of each task we’re presently taking on. And with no other relevance or emotion assigned to those choices. Being equal doesn’t mean doing all things exactly equally, an equal amount of the time. It’s each doing our part where needed, shouldering more of one area to allow each other to flourish in other areas.  I gave up my agency job to allow my husband to take a better job in an area where working at an agency isn’t possible. He enjoys working at a big, successful company and managing people hands-on. I enjoy being alone, just doing the work and managing myself.  We couldn’t both have it all, but in the various permutations this one makes the most sense and makes us most happy.

So where does that leave me? Who am I right now?  And who am I going to become when this two months of “figuring it all out” is over, and it’s time to start our family?  I guess the only certain answer is that I’ll still be Katie Grossman, and the rest is up for grabs.  But what I do know is that I don’t have to be a career-woman and a housewife and an athlete anymore than I have to be only one of those things. My blend is my blend, yo.

And as for that Superwoman issue, that loss of identity, that scary feeling of giving up and anti-progress? It’s definitely all bullshit.  At the end of the day, I’m still giving the same amount of passion and effort to my life, I’m just dividing it amongst fewer activities.  Deciding to do more in less things doesn’t make me any less of a woman.  Just as a woman who prefers dividing her time amongst more things isn’t doing it wrong either.  And maybe that’s just it.

In the home.  In the workplace. On the sidelines.  On the field.  For so long, we women have been told where our place is, and we’re supposed to feel empowered when we’re in it.  But it’s crap. The most empowering thing is when a woman’s place is wherever the fuck she wants. 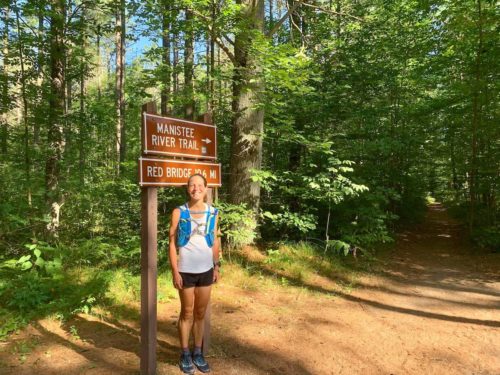 You Are So Capable 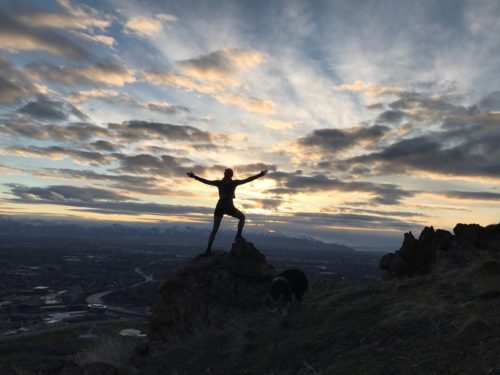 Am I the Only One Who Does Mental Math Calculations While Running?