A Trail Sisters Guide To Running in Bears Ears 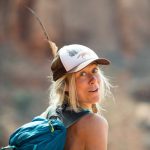 Morgan (“Mo”) Sjogren runs wild with words anywhere she can get to with running shoes and a pen. Morgan is a passionate public lands and environmental activist who devotes much of her writing and time to advocate, educate, and inspire others to help protect wild places. She is also a Janji Field Team member.
More From Morgan Sjogren 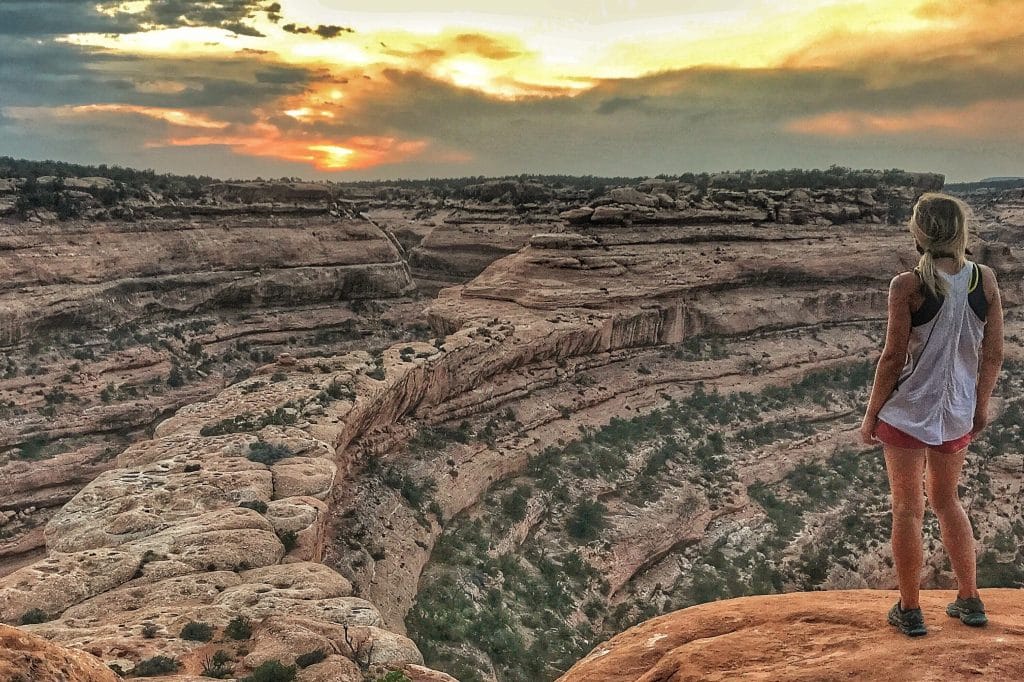 For most of this year, encompassing four seasons, I’ve lived (loosely termed as I am a nomad living out of my Jeep) in Bears Ears working on several stories and a hiking guidebook for the Colorado Mountain Club. This has given me the opportunity to intimately get to know much of the area—although I realize I am just scratching the surface as this place is so large, so vast, so intricate that locals and natives confess that it is impossible to truly know it in one’s lifetime. For many trail runners, this 1.35 million acre National Monument (designated by President Barack Obama in December 2016) rings new to the ears, however the places within it have always existed—Grand Gulch, Cedar Mesa, Elk Ridge, Dark Canyon, Beef Basin, Indian Creek, Lockhart Basin and the Abajo Mountains have all been recreation destinations in their own right and are now united in their protection under the umbrella of the monument.

While I humbly have infinitely more to learn about Bears Ears, below are some of the most unique, interesting, beautiful and helpful things I have learned from this place as they apply to trail running. My hope is that they enhance your trip, should you find an opportunity to visit this incredible place, and help you wrap your head around the complex area and its ever shifting current events.

What areas are included in Bears Ears? Bears Ears contains the following areas that previously were managed under various other types of public lands designations (ex Forest Service, Wilderness, BLM): Cedar Mesa, Elk Ridge, Dark Canyon, Abajo Mountains, Beef Basin, Indian Creek, Lockhart Basin, Valley of the gods and an unnamed island of land behind the Clay Hills. Currently they are jointly managed by the BLM and Forest Service.

Why is it a Monument?: Obama designated Bears Ears a National Monument in direct relation to the 1906 Antiquities Act (created by President Theodore Roosevelt). National Monuments are designated to protect, at the utmost level, areas that are of historical, cultural and scientific significance to the United States of America and its people. While not the only form of public lands, Monuments do not allow new drilling, mining, grazing or use permits to be granted once they are designated (but allow previous permit holders to continue their work). This explains why you are likely to see cattle during your visit to Bears Ears and even on many trails!

Current Events: This spring President Trump requested a full review of 25 National Monuments (including Bears Ears) by Secretary of the Interior Ryan Zinke, which many feared would lead to massive reductions or even rescinding Bears Ears and other monuments (the perception being that land would be opened up for drilling, mining and other exploitation). The results of his report are not promising and vague at best, most notably—suggesting an amendment to the size of Bears Ears. At the time of this story no official actions have taken place, but a recent bill has been proposed by Congressman Rob Bishop (Utah) that would potentially gut the Antiquities Act further jeopardizing the future of Bears Ears and other National Monuments.

When to go: The typical season recommended for visitors is spring and fall. Bears Ears ranges in elevation from around 3,500 feet and 11,000 feet and its temperatures and weather patterns reflect this. Winter can bring snow and freezing temps even to the canyons and desert areas, and summer (roughly July through September) is typically extremely hot and also monsoon season which brings deadly flash floods.

Trail Running: The trails in Bears Ears are primitive, unmaintained and constantly shifting thanks to flash floods, wildlife and even cattle in some areas. If you are going to Bears Ears to run, I recommend that you view it as an adventure, two-footed sightseeing rather than training. The terrain is rough, dangerous and sometimes impassable forcing you to slow down to a stop, and sometimes even crawl on all fours. There are no trail signs, and cairns are often destroyed or inaccurate. Route finding is an essential tool so have a guidebook and a map with you. While everyone’s standards of what is “runnable” terrain vary greatly, I recommend the following routes for runners:

Tuerto Canyon, Skyline Trail, Shay Ridge (These are in the Abajo Mountains and can be made into a variety of routes and loops that make over 20 mile days possible.)

Woodenshoe Canyon (This tributary of Dark Canyon is just under 15 miles one way.)

Of course Bears Ears has a TON of dirt roads giving runners of all abilities and comfort levels endless possibilities while experiencing the beauty of Bears Ears.

Know before you go!: Bears Ears is a wild and primitive place. This is not a National Park with maps, signage and rangers to assist you. Although, the Kane Gulch BLM Ranger Station can be an asset—just keep in mind that it is located in Cedar Mesa which can be several hours away on rough roads from other areas of the Monument. Make sure you have plenty of water, food and gas before you head out to any routes. Cell service hardly exists at all. If you have an accident, the nearest medical help can be a long ways away in either Monticello or Moab. Keep a close watch on the weather—a forecast for Bluff, Blanding or Monticello can be a good start but you will have to factor in vast differences in elevation and micro-climates. If you see storm clouds in the distance it is highly recommended that you avoid travel into any of the canyons.

Visit with RESPECT!: This is the most important knowledge for any trip to Bears Ears. It is essential to carefully read and practice these tips outlined by Friends Of Cedar Mesa to ensure that the delicate desert terrain and artifacts are preserved out of respect for the environment and the ancestors of the people who came here first. Much of the area is still used by tribes today for ceremonies and rituals, while archeologists continue exciting research.

Why I love Bears Ears: My first visit to Bears Ears was confusing, cold and challenging. It took me several trips to get my bearings, and ultimately I made this place my basecamp as an opportunity to fully immerse myself in its wild spaces. I love the way the light dances off the canyon walls morning and night, turning a corner and spotting a rock art panel high on an alcove, stopping to admire a tiny frog or lizard against the cracked clay earth, running from the alpine woodlands of Elk Ridge to the red sandstone walls of Dark Canyon, and the way the Bears Ears themselves are always somewhere in the distance seemingly watching over and protecting this beloved area.

Morgan (“Mo”) Sjogren runs wild with words anywhere she can get to with running shoes and a pen. Morgan is a passionate public lands and environmental activist who devotes much of her writing and time to advocate, educate, and inspire others to help protect wild places. She is also a Janji Field Team member.
More From Morgan Sjogren