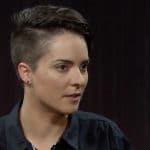 Victoria Stopp is the author of Hurting Like Hell, Living with Gusto: My Battle with Chronic Pain. She’s also a motivational speaker and has given talks on everything from pill addiction to book publishing. Hurting Like Hell, Living with Gusto won gold in the 2018 Florida Authors and Publisher’s President’s Book Award contest and was named a 2018 Editor’s Pick by McFarland & Company. Victoria has been featured on Fox 5 Atlanta, WSRE/PBS for the Gulf Coast, WUWF/NPR affiliate, Spartan Race’s blog, Aaptiv blog, Out Magazine, and multiple podcasts. She fits in as much trail running as possible between book events.
More From Victoria Stopp 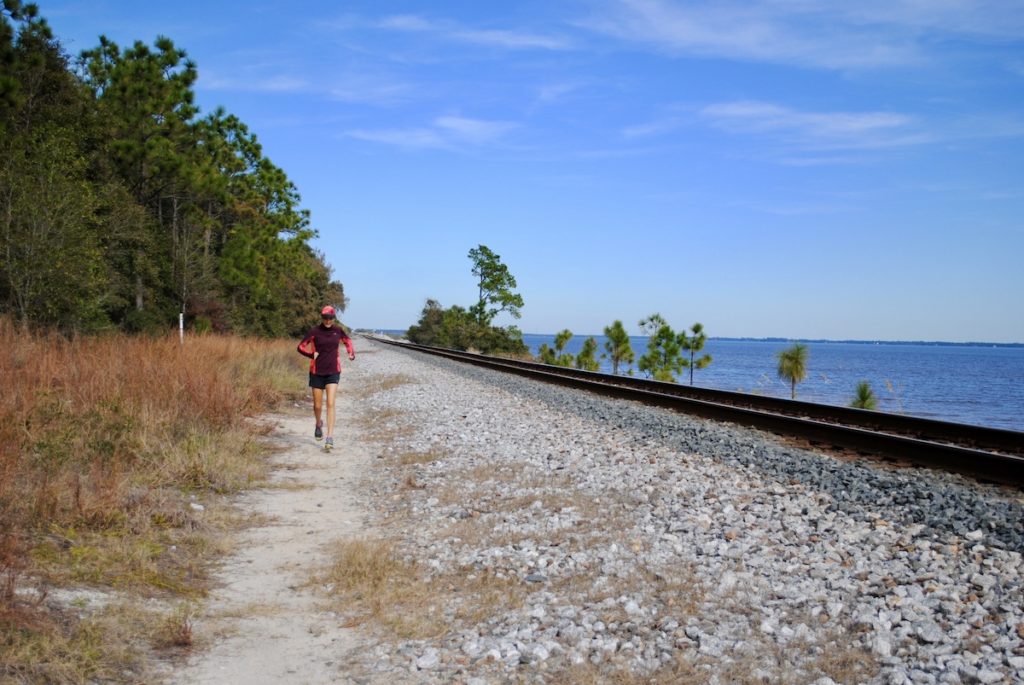 My weekend trail run was wonderfully disastrous. I didn’t want to drive an hour to the state forest, so I opted for the wooded property that skirts our city’s airport just a few minutes from my house. Urban trail running isn’t ideal, but it definitely beats asphalt and traffic. The airport property isn’t heavily wooded, but the trees and small colonies of wildlife make it a welcome oasis in the midst of a traffic-plagued part of town. Rabbits, raccoons, bluebirds, and even gopher tortoises call the land home, and it’s by far my favorite local place to run, and the nearby park along the bay is a great place for adding mileage to the route. I planned an eleven-miler, which required multiple loops through the property, but repeating the same scenery isn’t so bad when it’s beautiful. As is often the case, the weather forecast was completely wrong and it was pouring rain when I started my run.

I didn’t use any bug spray because it wasn’t mosquito season, and I figured the heavy rain would wash away the spray within minutes anyway. A mile in, I realized I’d had a little too much coffee and already needed to pee. I ducked behind a large oak and took care of business within seconds, then headed into the thickest part of the woods. I ran along a dirt road toward the bay, turned around at the dead-end, then finished a couple more loops for 11.5 miles. The rain let up and eventually stopped, but not before I had to step into the brush to avoid two massive mud puddles.

I didn’t think much about stopping to pee in the woods— every trail runner and hiker has to heed the call at some point— and I didn’t think much about dodging puddles by running a few steps through tall brush. By the tenth mile, I mostly thought about food. Other than an hour of intense, unpredicted rain, nothing was remarkable at all about the run. I decided to reward myself with dry clothes, hot coffee, and a big lunch from our local health food co-op. Their Sunday buffet is my go-to after a long run, and I hurried to change into a cotton shirt so I could hit the road and load my plate.

Three bites into my mashed potatoes, I absentmindedly touched the underside of my left thigh, about an inch above the knee. I hadn’t felt pain or an itch or anything, but some tiny level of discomfort must’ve alerted me to investigate. Instantly, I knew what I felt— an embedded tick. I tried not to panic but I felt the color drain from my face. The plate of food that’d been so delicious suddenly looked inedible.

I decided to finish eating but to forgo my planned grocery shopping and go straight home instead. The potatoes, turkey, and vegetables— my treat after a long run— went down in a blur. I stopped in the co-op bathroom to make sure, under bright lights, that I was right about the tick. I was. And even though its head was buried in my leg and I had to contort myself to see it, I could tell it was a black-legged tick— the kind that carries Lyme disease. As I walked to my truck, I reasoned with myself that my potential exposure to Lyme was limited. I live in Florida, not the northeast. It wasn’t nymph season, and nymphs are often the ones that spread Lyme. The tick hadn’t been embedded long— at most, four hours, assuming he burrowed into me at the start of my run and hung on since then. Had he climbed aboard when I stopped to pee? Or when I ran through thick brush to avoid puddles? I’d read dozens of articles about Lyme over the years and knew the risks and percentages, but I also knew of way too many people whose lives were severely impacted by the disease. Two women I know who live in my town were bitten by ticks locally, and both are suffering the devastating effects of late-diagnosis Lyme. Statistics might’ve been in my favor, but the margin for statistical error and the women I knew made me very afraid.

When I got home, I grabbed two alcohol wipes, a flashlight, and tweezers. I knew I should pinch the tick as close to my leg as possible and pull fluidly and firmly, but my instinct was to yank it out. I settled my nerves and held a flashlight over the tick. Its legs moved while its head stayed buried in my leg, and I felt nauseated at the sight of it. I grabbed it with tweezers, squeezed, and pulled. It came out fairly easily and with only a slightly sharp sensation. I laid it on a piece of paper and looked at it up close under the flashlight. Definitely a black-legged tick, also called a deer tick. I started reasoning my way out of Lyme again, talking seasons and statistics and random facts I’d read on the Centers for Disease Control website. Then I got in the shower and, under very hot water, checked every inch of myself for other ticks. Luckily, there were none.

It’d been a few years since I’d had a tick embedded, although I’d found a few crawling on my legs during hikes. I couldn’t believe that after a month in the mid-south and northeast— time that was largely filled with hiking and trail running— I hadn’t picked up any ticks. I’d been meticulous, asking friends and even random acquaintances to look at my bare back when I finished a trail run in Maryland, using a system of mirrors to check myself in my tent in Shenandoah National Park, and combing my hair slowly every night before bed. But I was in Florida, on urban trails, and picked up a tick.

I stayed up way too late reading blogs, medical journals, and entomology websites. Every time I felt better about my low chances of getting Lyme, I noticed qualifiers like “most” when talking about cases of transmission. In other words, no guarantee that I was in the clear.

I called my doctor the next day and explained what happened. He wasted no time in making his decision, and it turned out he takes Lyme as seriously as I do. He’s not the type to over-prescribe medications, but after I told him it was a black-legged tick, he immediately called in a dose of doxycycline, a strong antibiotic. He also said he had a plan for more aggressive treatment if I showed any symptoms of illness within the coming months. While I waited for the pharmacy to fill my prescription, I ordered two bottles of organic supplements that I’d read about on various Lyme blogs. My emotions alternated between feeling stupid for possibly overreacting and feeling panicked about the disease and feeling good about taking all precautions. When I was a kid, my dad would return from the woods or his garden with ticks embedded fairly regularly, and we’d pluck them out and forget about them. Lyme existed but wasn’t an epidemic yet, and ticks were just a gross inconvenience. Now, though, I’m afraid. Habitat destruction has drastically changed the Lyme landscape since my childhood.

I’m particularly scared of Lyme because I’ve already been dealing with more than a decade of chronic pain issues. I even wrote a book about it (Hurting Like Hell, Living with Gusto: My Battle with Chronic Pain). Signing and speaking tours were a huge reason I travelled a ton in the northeast in recent months. The book’s been out for a year, and while it’s been an awesome ride, I’m not looking to write Volume II. I don’t want a story about chronic Lyme. Potential second book or not, I’m finally getting healthy after so long, and the idea of getting Lyme now is cruel and terrifying.

I decided the tick was a blessing in a way, assuming I continue to stay Lyme-free. Having one embedded, after not even being in a true forest, was a potentially lifesaving reminder to check myself every day, year-round, if I’ve been running or walking anywhere except roads. The CDC says the longer a tick is embedded, the higher the chance of it spreading Lyme to its host.

The antibiotics went down without any fanfare at all. I had slight intestinal consequences for three days, but nothing major. I was very tired during workouts, which contributed to my paranoia, but I also wasn’t sleeping well or staying properly hydrated, so that’s probably why I was tired. One of the supplements smelled kind of bad so I swallowed it quickly. I checked the bite site daily and watched the small red bump slowly fade to pink, then almost disappear. Fifteen days from the bite, I felt symptom-free and very, very grateful. I’ll continue the supplements for a month and will call my doctor immediately if anything suspicious shows up. My next long run was all pavement, which dampened my soul, but I wasn’t ready to go back to the woods yet. I love trail running and hiking, but I needed a break. And the next time I go out, I’ll be sure to use bug spray on my shoes and clothes, even if it’s raining.

I’ve read about ticks to the point of exhaustion. I even started following an entomologist on Twitter in hopes of picking up an obscure tip on how to avoid Lyme. Some commonplace advice isn’t practical for trail runners– like wearing long pants and tucking them into tall socks. I live in Florida, and I’d die of a heatstroke if I dressed like that. But some advice is tried and true whether you’re a runner or a hiker or a gardener. Since my latest scare, I religiously check myself for ticks after any run that involves woods. I start from the feet and work up, using mirrors and bright flashlights when necessary. I take hot showers as soon as I cool down from the run, and I always check my clothes for any hitchhikers before tossing them in the laundry basket. I’m getting better about remembering to spray my shoes with repellent before leaving the house and always wear a hat on trails. The Center for Disease Control also has a helpful webpage dedicated to tick bite prevention.

Victoria Stopp is the author of Hurting Like Hell, Living with Gusto: My Battle with Chronic Pain. She’s also a motivational speaker and has given talks on everything from pill addiction to book publishing. Hurting Like Hell, Living with Gusto won gold in the 2018 Florida Authors and Publisher’s President’s Book Award contest and was named a 2018 Editor’s Pick by McFarland & Company. Victoria has been featured on Fox 5 Atlanta, WSRE/PBS for the Gulf Coast, WUWF/NPR affiliate, Spartan Race’s blog, Aaptiv blog, Out Magazine, and multiple podcasts. She fits in as much trail running as possible between book events.
More From Victoria Stopp