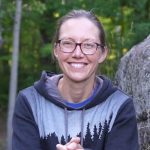 Amy is an endurance sports photographer, based in Duluth, Minnesota. She has been running her entire life and trail running since 2012. Amy recently launched Onward, a photography project aimed at sharing the stories of female endurance athletes. To learn more about and follow Onward: https://amybroadmoore.myportfolio.com/onward
More From Amy Broadmoore 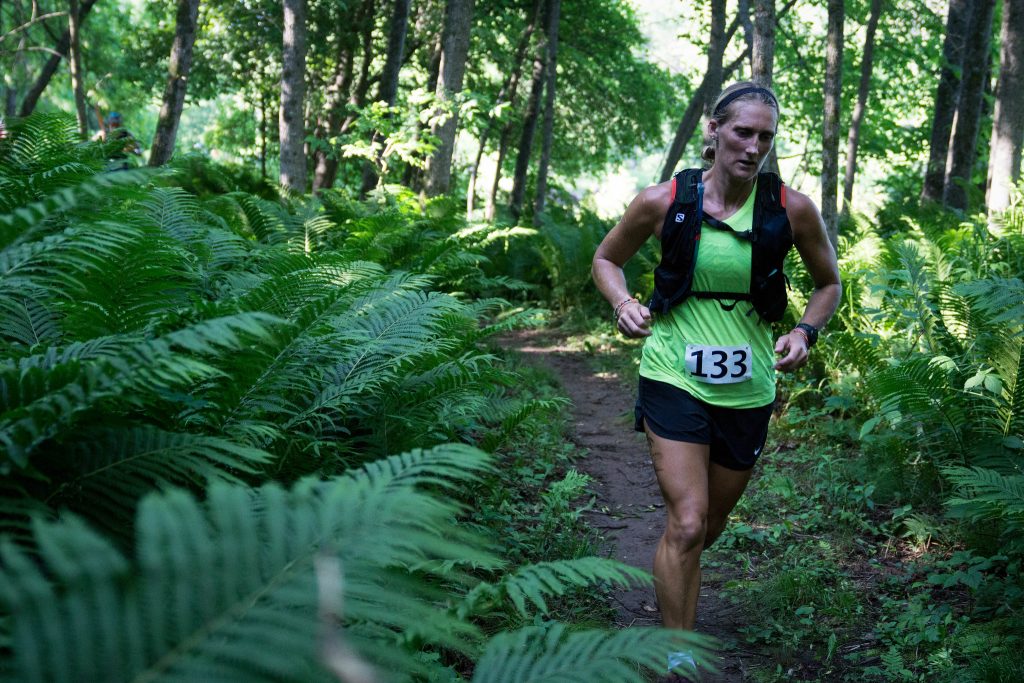 As is common with 50 milers across the country, women make up only a fraction of the participants in the Voyageur 50 — less than one in four, to be specific. The more shocking fact to me is that this statistic has remained essentially unchanged since Scott Jurek set the course record twenty years ago!

There are several factors that may explain why women’s representation in the Voyageur 50 has has not increased substantially during the past 20 years. Undoubtedly, one contributing factor is motherhood.

In 2015, I decided I wanted to train to do a marathon. I couldn’t control my numbers. The running would make insane highs and then horrible lows. I would also get dangerous lows days after a hard workout. I felt like it was impossible, so I threw in the towel. Then one day I looked at my 6-year-old and realized that by doing this I was saying to her: ‘No honey, there are things you can’t do.’”

“I really love to have my kids at the race since they’re part of training. My [training] goals were to spend my weekdays running with the kids in the stroller for three to four miles and then try to do at least a ten mile run on the weekends without the kids. Some of my goals now seem very small compared to before having kids.”

“Standing at the starting line of a 50 mile trail race gives me goosebumps. Unlike road racing, I am not nervous. I am excited and focused on the long haul. There is no warm up or hoping that I can keep a 7:30 pace. I am surrounded by a bunch of individuals — all ages, shapes and sizes — that have one common love of the trails. I know we will keep each other motivated and energized all day long!”

“Running is my time. I can tune in to myself, and I am in control. I can’t control the emotional rollercoaster of being a mom or the frantic pace of my job and the patients that I care for as a labor and delivery nurse, but when I run I’m the person in charge. Running helps to keep me grounded and provides an inner strength, confidence and peace.”

“Running is my escape. Voyageur was five days after [my daughter’s] accident. When my daughter was in her head-on car accident — where her car spun around, flipped over and started on fire — my world stopped. I didn’t eat for four days and didn’t sleep for four days… I had mixed emotions. I wanted to run and be out on the trails, but I didn’t want to leave her side. She told me to go run [Voyageur] so I could be strong for her. I had running friends that said it would be good for me to get away for a bit.”

“The plan was I wanted to mentally work through the heat and work hard… but I was just so chill. My biggest struggle was that I was letting Adam down. He is so organized and efficient. If I am racing, we both uphold our end… and I just hadn’t been doing my part. It’s not about speed, time or results. It’s about the effort you put in. It’s about respecting your team.

Maybe I just needed that joy of the community that I soaked up. I definitely felt rejuvenated.”

“I feel like I am competing with my old self, the pre-baby April, that used to be fast and has won. I’ve felt like I’m chasing an unobtainable  goal. There has been pressure internally and externally to return as I had been. And honestly, I wish I could be as fast as I used to be, I wish I could win, but I’m not being fair to myself.”

“I didn’t race at Voyageur this year. I spent the first half socializing, then at the halfway point was mad at myself for being in like 10th place. So, I spent the second half mad running — not something I’d recommend. I was and am still mad at myself, but there were so many strong women this year! I placed where I was meant to. …and I got my 11th Voyageur finish.”

“I didn’t start running until Kason was 9 months old. I experienced pretty severe postpartum depression in that first year, and one day my friend Chally asked if I wanted to go for a run over our lunch break. I resisted at first, but she asked again and eventually I said yes. Suddenly I was running one mile… then three miles… then ten… and so on. Through this, the feelings that PPD had supplied began to decrease, and I began to feel alive again. PPD stole over a year of my life, and running was giving it back.”

“My family motivates me. I grew up (and still live) on the Fond du Lac Reservation. Growing up seeing sickness and disparity was common. Both my husband and I strive to create a healthy normalcy. I know that as my children grow older they’ll see running and healthy activities to be a part of life.”

Nichole’s husband and kids met her at every aid station along the course of her first 50 miler.

“The second half of the race I felt amazing and was in a really good place mentally. I was feeling super happy at the swinging bridge. I had just spent a minute sitting on a bench watching the river before the Jay Cooke aid station. It was a spot I noticed on the way out and even said out loud to Jared that I’d love to sit there and look at the river. So on the way back I indulged myself, and it felt so good.”

“Kate and Mary aren’t runners at this point and get frustrated, sometimes, by all of the time that ultras and ultra training take from our time together. As soon as I finished Voyageur, we were hopping in the car to start a one-week vacation, and I knew they were excited to go. I was the reason we hadn’t left already.”

The highlight of Voyageur was “running to the finish with my kids: knowing they were waiting for me… knowing that I was going faster on the course than I’d expected, so our vacation was going to start sooner… I was overjoyed to see the road leading up to the finish. Having Mary fall in to run with me and knowing Cate was right behind. I was exploding with energy, joy, gratitude and love.”

“I want my kids to realize that there are things they can’t do… if they choose not to work for them. The number of things that really aren’t possible are very few.”

For more photos and stories about female endurance athletes, check out Onward!

Amy is an endurance sports photographer, based in Duluth, Minnesota. She has been running her entire life and trail running since 2012. Amy recently launched Onward, a photography project aimed at sharing the stories of female endurance athletes. To learn more about and follow Onward: https://amybroadmoore.myportfolio.com/onward
More From Amy Broadmoore