Finding Simplicity and Gratitude in Running 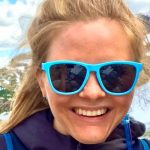 Aileen is a runner of trails, climber of mountains, swimmer of lakes and oceans, and a huge fan of Lucky Charms and chocolate-covered espresso beans. She hangs out in North Vancouver, BC. You can find her on Instagram @aileeenpatricia
More From Aileen McKeown 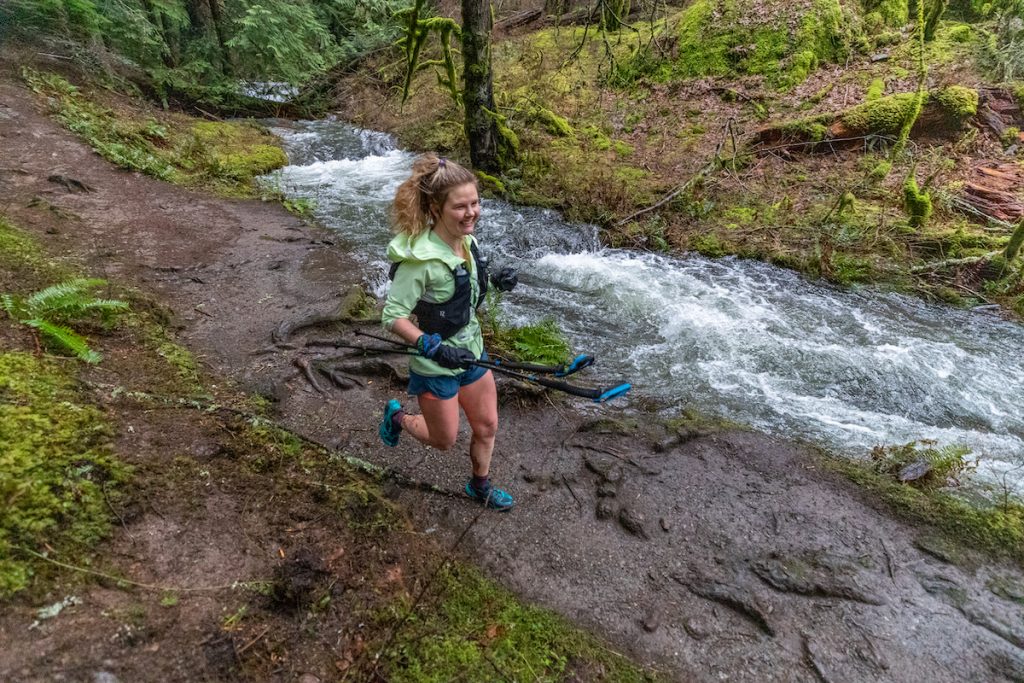 Last spring I ran the Diez Vista 50km trail race. Around 30km into the race, I was about to start on a long out-and-back section. I had run this part of the course before and was dreading the slog up the unrelenting undulating hills in a rainstorm. As I started shuffling up the first climb, the leader of the race ran past me in the opposite direction, just finishing his section of the out-and-back. Without a word, he offered a high-five as he flew past. I smiled. As I passed more runners heading back in the other direction, I was given an array of encouragement, from high-fives, fist pumps, cheers, and the occasional shout of, “you’re crushing it!” I reached the turn around point with a grin on my face and offered the same encouragement to runners I passed as I was heading back. Most of this encouragement was met with similar enthusiasm, although there were a couple of runners who scowled at me as I gave them a cheer. Despite this lack of stoke from some runners, I quickly realized that my own stoke and enthusiasm were a pretty great source of energy in an otherwise exhausting part of a challenging race.

As Brendan Leonard points out, being stoked is not objective. Therefore your enthusiasm and stokeness is yours to own, and not somebody else’s to dictate or make a judgment on. There is no objective definition of amazing or stoke, so you can create your own definition. This realization is pretty empowering.

In theory, practicing maximum enthusiasm and stokeness is great. But in real life, it’s impossible to feel stoked all the time. Sometimes the daily grind of training simply sucks. Maybe you are sitting with your heart racing and feeling extreme anxiety over something you can’t quite place your finger on. Maybe there are other people around you that are unkind or rude. Just because you try to practice maximum enthusiasm doesn’t mean that others will agree or reciprocate. This is the part that I often struggle with: how can you maintain excitement and enthusiasm and stokeness for yourself and others when it’s really hard? For me, I think the answer is to recognize the simplicity in running, find gratitude in your ability to run, and to draw inspiration in the badassery of the runners around us.

Earlier this month, I was sitting in my car waiting to catch a ferry to Orcas Island, Washington to run my first 100 miler. I was talking to my friend, who said, “You are so lucky at this moment; your world is about to get very simple. Soon, your only job is to have fun, to run, and to look after your body.” I considered this point, but was more concerned with finding my box of Lucky Charms to snack on during the pre-race briefing. It wasn’t until the race had started that I really realized how true this was.

Thinking of the big picture of everything would have been too overwhelming: the friends, family, and coworkers who thought I would do well in this race; of how far 100 miles actually is; of how much vert 26,000 feet is (that’s scarily close to the height of Everest!); of having to run for over a day with wet feet; of wanting to place in the top five female, despite this race being my first attempt at a 100 miler. So I decided not to think about that stuff. And really, that wasn’t why I wanted to run 100 miles anyway. In this race, in particular, I wanted to remind myself that I can do hard things. I wanted to show myself that I could keep moving despite doubting whether I could actually shuffle through 100 miles of gnarly trails, and despite the overwhelming despair I feel when faced with challenges where failure seems inevitable. I wanted to have fun and to experience that ‘yay running’ feeling when I am really only focused on finding enjoyment in that moment. I tried to simplify my thoughts to finding excitement and enthusiasm in each mile, even while wading through over-the-knee slush puddles in the middle of the night.

Running is a chance to find gratitude. I was running down from Mt. Constitution, the highest point in the Orcas Island 100 course. Despite the lack of feeling in my feet from the cold slush on the trail and the sideways rain pelting down in my face, I was enjoying the cruisy downhill switchbacks. It was the middle of the night, and I had a big grin on my face. I was feeling intense gratitude for the volunteers who had been at the aid station at the top of the mountain, who had cheered so loud as I shuffled into the aid station and shuffled back out into the storm a couple of minutes later. I felt so thankful that my crew had stayed up all night to meet me at that aid station, with dry mittens and hand warmers. I was incredibly stoked that I had the chance to enjoy some cruisy downhills while knowing that there was an aid station with pizza and coffee at the bottom of the mountain. I thought it was so cool that once I reached that aid station at mile 75, I would have run farther than I had ever run before. I was proud of myself for finding enjoyment in the suffering and pain that I was experiencing after running for over 18 hours in the rain. My gratitude for my crew, for the volunteers, and for my body and its ability to keep moving helped to fuel that enthusiasm for running despite the challenging conditions. I was genuinely having fun.

Finding inspiration in the efforts of others around us can help fuel our own stoke and enthusiasm. David Roche notes that watching the US Olympic Marathon Trials is really important for all runners; the inspiration from watching a race like this (and really, watching any race) highlights the perseverance, bravery, and commitment that each runner brings as they toe the line, whether it is the runners who make it to the podium (which, as David says, is really cool and admirable) or those who come in last. I found inspiration from some amazing runners at the Orcas Island 100. My friend, who won the race outright, ran up almost all 26,000 feet of slushy, muddy climbs in the race. I also met a runner, finishing just under the 36 hour time cutoff, who has a goal of running one hundred 100 milers in one hundred consecutive weeks. This race was number 63. I feel an incredible amount of stoke and enthusiasm when I think of the perseverance, bravery, and commitment that all of the runners brought to the start line of the Orcas Island 100 miler.

For the Orcas Island 100, I chose not to ask my crew about my place during the race because that was what I needed at the time, in that race, to stay present and to have fun. I think this looks different for everybody and looks different for each race or challenge you set out to finish. Adaptability and problem solving is part of the challenge and fun of running; do whatever you need to do on that day, for that run, to find gratitude for what you are doing, the challenges you are facing, and the suffering you are going through. Be grateful for the simple chance to run. Create your own definition of maximum enthusiasm, whatever that looks like to you in each moment. And keep practicing that stokeness and enthusiasm.

Aileen is a runner of trails, climber of mountains, swimmer of lakes and oceans, and a huge fan of Lucky Charms and chocolate-covered espresso beans. She hangs out in North Vancouver, BC. You can find her on Instagram @aileeenpatricia
More From Aileen McKeown