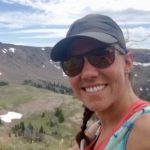 Brief bio: Brenna Cassidy is a wildlife researcher and passionate recreationalist. She is a PhD candidate at the University of Montana studying gray wolves. She can also be found in the pottery studio and exploring Montana with her rescue dog. She hopes to communicate the value of conservation and sharing the landscape with wild creatures.
More From Brenna Cassidy 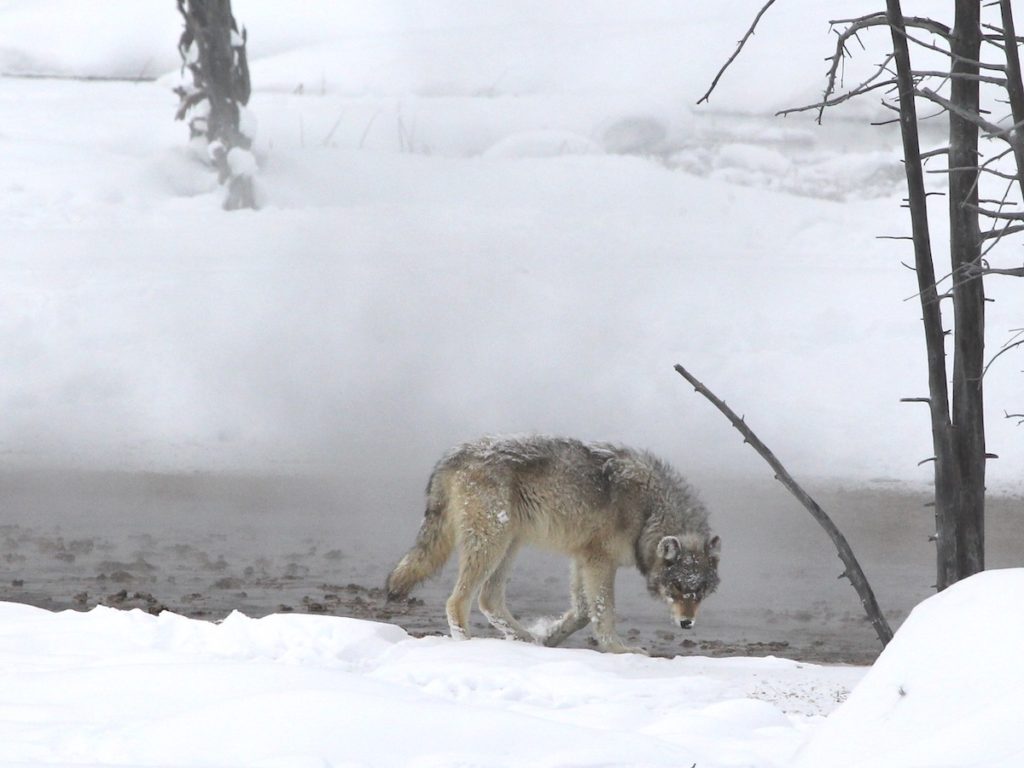 Brenna is a 2021 Trail Sisters and The North Face Adventure Grant recipient. This is her adventure story!

I’m floundering in thigh-high snow, the struggle mostly futile, trying to catch up with my field partner. We are high above Yellowstone National Park, following the three-day old GPS points of a wolf wearing a radiocollar used for research, studying its diet and behavior by seeing where it goes and what it leaves behind. She is bounding through a windswept patch, covering more ground in a second than I have in minutes. Elise and I have been friends for years, two early career women in a traditionally male-dominated field, both graduate students studying carnivores at universities in Montana. Our friendship has been forged in rain and snow, heat and bitter cold, working with wildlife, running trail races, and exploring throughout all seasons. We have dreamt of many adventures, but this one most excites us. When the Trail Sister’s Adventure Grant opportunity arose, I knew immediately we had to apply.

We have fanaticized of traveling the eastern boundary of Yellowstone National Park, from Cooke City, MT to the east entrance of the park. This journey is a serious endeavor of approximately 50 undulating miles with thousands of feet of elevation gain and loss, and scores of wildlife that call the area home. The route straddles the boundary between Yellowstone National Park and the Absaroka-Beartooth Wilderness, a place very few people will ever see in its entirety. This is an incredible opportunity to illustrate how to respectfully coexist with wildlife in a human-dominated landscape; grizzly bears, gray wolves, elk, and many other animals are abundant in this remote region. We have dedicated our careers to the conservation of such places and want to help others travel respectfully through these creatures’ homes. We will complete our adventure in July of 2022 but this summer we scouted some tricky areas of the route. One scouting mission included the retrieval of a radiocollar from one of the wolves involved in this research project.

The radiocollar wolf 1118F wore during her life held valuable data on her movements. Other groups had tried to find her and retrieve her collar containing this data but were thwarted by early season snow and numerous grizzly bears in the area. Her last known location was near an area of our route called Notch Mountain, a 10,950’ peak with a sheer cliff on one side. We were unsure if we could make it over this treacherous spot and retrieving wolf 1118F’s radiocollar would also give us an opportunity to see this remote area.

We found her on a high ridge, in a thicket of windblown trees near a mountain goat trail. Her final resting place overlooked a pristine wild area filled with steep gullies, a winding river, and alpine meadows. The grit it must have taken to climb to this spot as her final act was not lost on us as we looked towards the ridge we would be climbing on our own journey. We saw how we could move from ridge to valley, avoiding the treacherous shoulder of Notch Mountain to safely pass through the area. We were thankful to share this place and the courage wolf 1118F showed until the very end.

Coexistence with wildlife is fraught with difficulty. Wolf 1118F persevered through extreme hardship in a world filled with humans. Humans have quickly changed the world in countless ways, and we must realize that wildlife attempts to survive alongside us. There are numerous acts we can take to minimize our impact on wildlife. The most important and perhaps simplest, is by respecting their space and home. Seeing and being around wildlife can be a powerful experience, but by giving them space to feel comfortable, they can live a less stressful existence. Minimizing human interaction will let them raise their young safely and interact with each other and the world in a more natural way.

Supporting trail systems and managers that are considerate to wildlife needs and movements is a vital action as well. If your local trail system or running group does not already consider impacts on wildlife while planning races and events, the local wildlife will thank you if you bring up the subject with organizers. Wildlife exists with us, from the high alpine to within major cities to agricultural areas. On our journey along the eastern boundary of Yellowstone National Park, we will treat our adventure as one in their home, just as we try to do in our local towns and trails.

Being empathetic to wildlife by minimizing our impact and respecting the homes of these wild creatures is the greatest act of kindness we can give them.

To learn more about this wolf’s story, visit: https://www.nps.gov/yell/learn/nature/upload/2019-WOLF-REPORT_508.pdf

Brief bio: Brenna Cassidy is a wildlife researcher and passionate recreationalist. She is a PhD candidate at the University of Montana studying gray wolves. She can also be found in the pottery studio and exploring Montana with her rescue dog. She hopes to communicate the value of conservation and sharing the landscape with wild creatures.
More From Brenna Cassidy