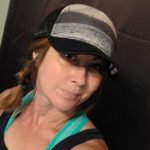 Jen just wants adventure. Through the years, she’s played roller derby, competed in amateur fitness and physique shows, been a burlesque performer and written trashy novels. But most of all, she loves being outdoors, running, hiking, and camping. She is a certified nutrition coach, studying for her personal training certification. In her spare time she likes to read, write, wander around and eat. She has the secret goal of running 49 miles on her 49th birthday and is blogging about it.
More From Jennifer Lassalle-Edwards

I am that person. You know the one whose social media shared all of the photos of scenic views, mountains, switchbacks, boulders, rivers, wildlife, changing colors of the seasons, and snow. A proud trail runner. When one lives in the mountains of Colorado, and trailheads, national and state parks are right outside of your front door, those posts are easy to make.

Then life happened. My husband’s job changed, and we trekked across the country. We landed in Virginia, right outside of Washington, D.C. A sort of shock hit me.  Surrounded by concrete and brick, there seemed to be a constant cacophony of sirens, train whistles, planes and honking horns. The sounds of people living their lives coming through all of the surrounding walls of our new condo proved difficult for someone who was used to quiet.

Walkways bustled with crowds. I had never witnessed so many people walking with their faces glued to a phone, oblivious to their surroundings, or the parade of strollers that blocked paths and sidewalks. Heck, I was used to dirt roads with not a sidewalk in sight.

Running through these neighborhoods, or the walkways near these well-visited areas, required more agility than hopping tree roots and dodging a slithering snake, yet I watched others do it with ease and wondered if I would get used to it.

Let me pause because I do not want to paint a false picture. My life has been spent living in vast types of environments. Born and raised in Louisiana, I bounced from rural, to suburban, to city. Even upon arriving in Colorado, metro Denver served as our first home. Running played a part in all of these towns, concrete, dirt, mud, but those mountains captured my heart. Once we had moved into our cabin, I admit that I never thought I would ever leave them, and so a deep love and attachment were born. Being a mountain girl became my identity. Moving back to a city rattled my senses, and resistance to the circumstances affected my mood. My attitude turned negative, and I believed nothing could replace my beloved mountains. I spent a fair amount of time whining, and a few close friends gently reminded me, “You always say that you want life to be an adventure, well, you got it. You’re there; suck it up. Explore.”

The search began for trails to run, places to hike, to get away from the noise. I could rattle off a bunch of cliches and quotes, but suffice it to say nature has always been an integral part of my life. As I wandered around the streets, I craved the solitude of nature even more. I started by defaulting to trusty trail apps. Surprised, a lengthy list of trails popped up nearby. My mood deflated a bit when I realized the majority of these trails were asphalted mixed-use paths winding around the neighborhoods and near highways.

My husband and myself even tried taking the metro a few towns over to an historic trail that boasted woods, hills, water, and dirt. Technically, it was all true. There was a dirt road that paralleled both the asphalted bike path, heavily traveled with walkers and cyclists, and a canal next to the major roadway. Thinking to save the adventure, we followed a trail sign to a less worn path that slowly disappeared in overgrowth. In my mind, it showed promise. You know, the road less traveled and such. Unfortunately, it also revealed an unexpected sort of life hidden in the woods. Besides piles of garbage and long burned out campfires from hidden parties,the woods contained ramshackle encampments. I had become used to passing sights like this under the bridges and in alleys on the roadways, but not so much on trails. I didn’t get close enough to see if these tarps in the woods were occupied. This was not the type of wildlife encounter I wanted. A bear or mountain lion meandering in the distance had long lost the element of surprise on me, but this boded a little creepy, so back to the well-worn trails we went. After a few inquiries, we found out unfortunately this isn’t uncommon in the area.

Instead of solely relying upon internet information, I asked a few people familiar with the area for their recommendations. Excited with possibility, we traveled an hour and a half away to a state park with an eight mile loop around a lake. Pulling up to the trailhead by a lake, the view held promise. We paid for our day pass, and prepared to go. The trail was dirt, but if you tilted your head slightly up, the view faced people’s backyards. The music from a party, a lawn being mowed, laughing, made a stark contrast to the view immediately in front of us. At least, two deer made an appearance between us and the homes. I admit that if I did live there, the path would be on my daily route, but the time and distance out from our home made the experience fall flat.

Colorado spoiled me. My lofty expectations blinded me. I held no appreciation for what was right in front of me. I admit that I didn’t allow myself to accept the differences. I heard myself still complaining. I adopted a horrible attitude that required big adjustments. I wasn’t the only person in the world unable to travel everyday to where those social media photo perfect trails were hiding, so I became adamant to embrace the city trails and shed the imaginary apprehensions that bound me.

I laced up my shoes determined to have a new outlook on my daily runs. There were definite pluses. The system of city trails offered safety away from the vehicle traffic. Signal lights didn’t slow my pace once my feet hit the path. Plus, the convenience of proximity from my building couldn’t be beat.

Once I gave the paths a chance, I found that the terrain could vary quite more than I anticipated. True, a majority of the trails are asphalted bike lanes, but at many points they switch to wooden bridges, gravel, packed sandy roads, and even dirt. Countless courses are shaded by trees and water features giving a reprieve from the noisy roads. People before me have even worn single track lanes in the ground parallel to some of the asphalt.

Weather can abruptly alter runs by the river and canals. At times, gale winds, rain, high tide have left trunks of trees, branches and piles of driftwood blocking the track. Some mornings water rises during high tide flooding the trail leaving no option but to turn around and find another route. In a few instances, I embrace it and splash through with glee, and climb and hop over the blockages to return home with muddy legs and shoes.

There’s a new found pleasure on these lanes. I have been able to explore the city in a more intimate way, rather than racing by in a vehicle or metro. Even though more people pass by than I ever remember in the mountains, I’ve grown to enjoy the friendly waves, smiles, and huffed-out, “Hello’s.” There’s an unspoken camaraderie as we begin to recognize each other.

Sure, I still love taking a trip to get away on the dusty trails, and hope to explore the mountains on this side of the country too, but that is not always an option for me, or many others. I continue to use those trusty trail apps pleasantly surprised that these urban trails continue for forty, fifty, and many more miles. That excites me to try to further my mileage, as I have already found the areas where the path briefly turns to dirt, and the trees are deep enough to muffle the noise. These are times of appreciation. I remember that being able to run, even if you prefer to run on a trail when you’re running on asphalt, is a gift. The big blue sky covers it all the same, whether it’s a steep vert or lolling hills. Once I shed my expectations, I was able to see the beauty mixed with the chaos in embracing running wherever your feet fall…and you can still find those scenic pics too.

Jen just wants adventure. Through the years, she’s played roller derby, competed in amateur fitness and physique shows, been a burlesque performer and written trashy novels. But most of all, she loves being outdoors, running, hiking, and camping. She is a certified nutrition coach, studying for her personal training certification. In her spare time she likes to read, write, wander around and eat. She has the secret goal of running 49 miles on her 49th birthday and is blogging about it.
More From Jennifer Lassalle-Edwards