I Was Told I’d Never Run… Against Great Odds, I Run Ultras

Andréa is a Michigander living in Ohio. She prides herself on being active in the community and has worked with a variety of non-profits and local parks as a race director/event coordinator and volunteer. She is a passionate activist and loves trail running, swimming, cycling, yoga and wine on a sunny sandy beach.
More From Andrea Van Sickle 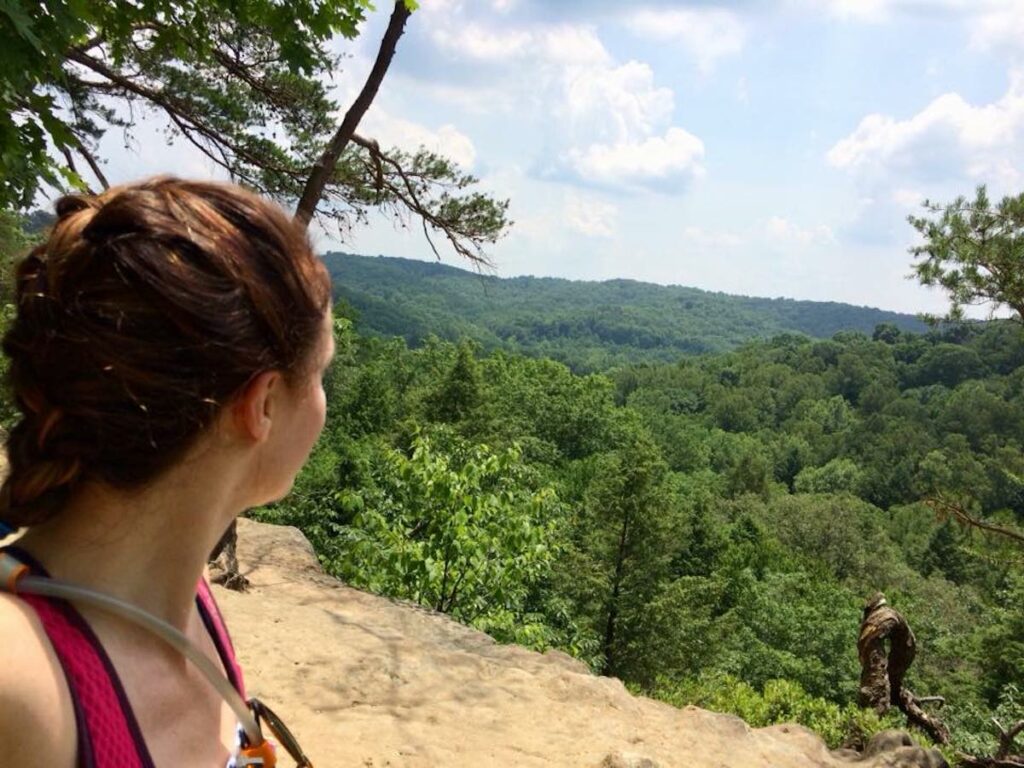 Running is more than a sport to me; I’m out here doing the impossible.

My story is about defeat, but also never quite settling on never.

At one point in my life I couldn’t walk or get up from the laying position and had a catheter due to nerve damage where I couldn’t void. I was told by doctors that while I would likely be able to walk again, they didn’t know if I would ever be able to walk without nerve pain again.

I had always aspired to be a runner, but struggled with a variety of issues including misdiagnosis. In my youth I enjoyed soccer, playing sweeper- that thrill of sprinting down the field in a big burst was such a rush, but it was short lived. Doctors diagnosed me as having sport asthma, but inhalers didn’t seem to help. My time on the field was brief as my heart would be pounding out of my chest (and head), feeling like I couldn’t breathe and about to throw up after every short run.

Still in my teens, a friend of mine and I decided we would try running around the block in effort to get healthy. I remember only making it a few mailboxes from her house before I told her I had to stop and walk. She thought I was joking; shocked that I couldn’t even make it around her short block, or even before she at least got a little winded.

I tried various attempts at different kinds of athleticism. After borrowing equipment for one back-country hiking trip on the flat terrain of Manitou Island (Michigan), I thought I finally found my thing! Purchased my own equipment and set out with another rookie back-country hiking close friend of mine to do a section of the Appalachian Mountain for a week. It became obvious quickly that elevations really do change the scene quite a bit! My heart was pounding; I was feeling faint and nauseas. My friend was also noticeably getting frustrated with my pace. She had just had her first child (said she was out of shape) and couldn’t understand how her seeming fit friend couldn’t keep up with her.

But through the misery, I also fell in love. Those views from the mountain ridge, so breathtaking. Hiking through the morning fog where you couldn’t see but a couple feet in front of you, mystical. The sparkling rocks on the cliff edge, mesmerizing. The towering and cooling bluffs, miraculous. We also faired a wicked storm on top of Mt. Leconte in the lean-to and had bears grunting outside trying to get our hanging food another night. But that didn’t stop me. It was the journey where my heart fell in love with the trails.

But I couldn’t ignore the blistering struggles I faced along the way. So when I got home, I made a doctor appointment which lead to an appointment with a cardiologist. They tracked my heartbeats for a couple weeks with a monitor. When the results came in, I was diagnosed with tachycardia. My resting rate at one point shot up to 188 BPM, but overall my resting rate was around 95-120bpm.

I was struggling with past trauma and depression during this time, and medication I was put on made me gain weight. I was put on Metformin to help control my glucose. But the scale kept going up despite my cutting of calories, and eating healthy foods. Refusing to let this continue, I signed up for a six month membership to a gym which included a visit with one of their personal trainers. When I walked into the appointment, I was feeling excited- he was going to help me map out the way to getting healthy! He took a photo of me for my “before” image, I was weighed, measured and pinched on my arm. Body Mass Index Category: OBESE. Those words out of his mouth hit me like a ton of bricks. I mean, I knew I had gained, but I was in complete denial that I would ever be considered obese.

Next up on his list was asking me what my ultimate fitness goal was. My answer: to be able to run. But quickly let him know that it wasn’t likely because of my heart. He said nonsense, and what seemed like a blink of an eye, had me on a treadmill walking. Took my heart rate and slowly started increasing the speed. About a minute or less passed when I let him know, I can’t breathe. Stop the machine. Begrudgingly, he stopped it and took my heart rate.

The next words out of his mouth I will never forget. “Wow. Um. Yeah. I hate to break it to you, but you will NEVER be a runner.”

I went home in tears and never walked a foot back into that gym. I had given up.

But this wouldn’t end up being my only hurdle. Or my hardest.

I started having more medical issues and ended up getting a lumbar puncture to test for Multiple Sclerosis (MS). It’s not typical, and perhaps I have an undiagnosed hereditary issue, but the LP put me in so much pain I was unable to walk or get up from the laying position. I also suffered nerve damage where I needed a catheter for some periods of time. I was put on a medicinal cocktail that is strikingly similar to the list that killed Heath Ledger. Fentynal patches, muscle relaxers, sleeping pills, depression and anxiety meds….

This was the darkest time of my life.

I didn’t feel any joy from the pain meds; they only took the edge off of pain that I can now say is worse than un-medicated natural childbirth. At one of the visits to the neurologist I asked if this pain will ever go away, if I would be able to walk without assistance. He told me it would be likely that I would be able to walk, but couldn’t reassure me that the nerve pain would go away.

Many visits to the hospital, being treated like a drug addict. Physical therapy visits that only seemed to make things more painful. I started pushing friends away and contemplating taking my own life.

Over a year later, the pain meds didn’t seem to be helping the pain at all, and doctors were not going to increase the already seemingly high dose of pain meds. I decided to stop taking them altogether. The pain remained the same. At this point I was able to walk slowly, and able to stand but not for long at all. But also sitting too long was painful as well. Laying flat was the only way to find any sort of relief.

My next visit to my primary physician I was asked which medications I was on. I let him know I was not on any pain meds. He didn’t believe me. Asked my mother in the room for verification, and even took a urine sample. “I thought I was going to have to put you in rehab.” he told me. “Doctor I never at any point felt anything good from any of those pain meds I was given, only pain.”

Over the next 6 years my pain would become less and less. I would have good days and bad days. But gradually progress was made and my pain was becoming more intermittent and manageable.

It wasn’t until the birth of my first child where things mistakenly took a turn in the right direction! She was struggling with projectile vomiting, rashes, bloody stools, and was inconsolably crying for hours and hours on end. I was breastfeeding and tried removing dairy and a variety of other select foods. Eventually went on what is called a “Total Elimination Diet” (under the care of my doctor).

In two weeks time my daughter started seeing relief! I continued the diet and tracking her symptoms, but what I didn’t anticipate is what I discovered about my OWN body!!!

Through diet I figured out the tachycardia issues with my heart was related to an autoimmune response from eating egg and corn. My heart at a normal rate sort of freaked me out! I asked my doctor “Am I alive?”, he chuckled and asked what I meant. “Is it ok for my heart to be beating this slow?” At which he responded, “yeah, it’s great! Almost an athlete’s heart rate.”

WHAT? Did he say ATHLETE?!

The MOMENT I got home, I put grabbed my non-running stroller (sorry kiddo! I ended up getting a BOB later, I promise!), in my non-running clothes and non-running shoes and headed out the door. I started running and for the first time ever in my life, the only pounding I could feel was that of my feet hitting the pavement!

That was back in 2012 at age 29. I became a trail runner. I still had some pain and have since found amazing physical therapists that have helped me strengthen and stabilize my muscles and worked with mobility. My first race was a 10k trail while unknowingly pregnant with my second child and continued to run trails through my second pregnancy.

I have since run thousands of miles, including 2 ultra marathons- pain free!

While I might not be winning races, I’ve know I’ve already won.

Give your body time to heal. Seek out a variety of care. But most of all, never settle on never.

I don’t run to be fit, strong, or skinny.

I run because I CAN.

Andréa is a Michigander living in Ohio. She prides herself on being active in the community and has worked with a variety of non-profits and local parks as a race director/event coordinator and volunteer. She is a passionate activist and loves trail running, swimming, cycling, yoga and wine on a sunny sandy beach.
More From Andrea Van Sickle