Catherine LeClair is a trail runner and writer originally from Maine, now based in Los Angeles with her dog Harry. She loves reminding her friends that LA has a massive national forest just 20 minutes east of the city. Her writing has appeared in The New York Times, The New Yorker, WIRED, and more.
More From Catherine LeClair 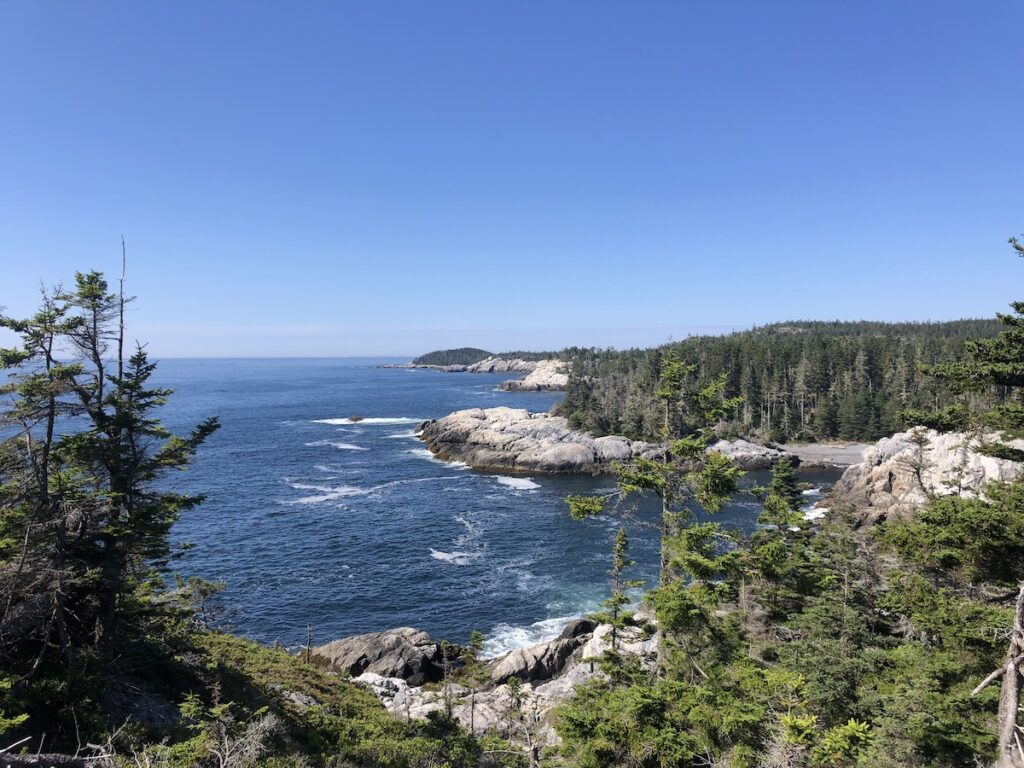 Catherine LeClair is a 2022 Trail Sisters and The North Face Adventure Grant recipient. This is her adventure story!

My 85-year-old grandmother has dementia, which means that her short term memory is frequently faulty. Recently, while sitting in a church pew at the funeral for her cousin’s husband, she turned to my aunt Cathy and asked, “who died?”

Her oldest memories, however, are crystalline. She returns to these stories so often that our family knows them all by heart. My favorite is her story of the two summers she spent as a teenager working at a resort on an island off the coast of Maine called Isle Au Haut.

As she tells it, she and her three best friends packed up their suitcases after their sophomore year of high school, boarded a ferry, and from June until Labor day lived in little cabins at a resort called Point Lookout Club. There, they served wealthy and influential people that came from away to experience a pristine summer off the coast of Maine. In my grandmother’s story there were two local island boys who were lobstermen, and two boys who came from Boston with their parents to stay at the resort whose father was a professor at Harvard. By day, the girls wore ugly yellow dresses with aprons and waited on the resort-goers, and at night they’d have bonfires on the beach, where the boys would cook lobsters caught earlier that day, and play songs on their guitars. When she tells these stories I picture a version of my grandmother I’ll never know — young, adventurous, and mischievous — and wonder what it would be like to know her.

No one in my family had ever been to Isle Au Haut. It wasn’t far from where I grew up in central Maine but it’s not exactly convenient. You have to take an hour and a half drive to a coastal town called Stonington, where you take an hour-long ride on the mail ferry out to the island. It’s the kind of trip you tell yourself you’ll get to, and then a decade goes by. So this summer I decided to make the point of actually going, so I could experience my grandmother’s memories for myself.

Isle Au Haut also makes the perfect destination for a running-inclined person like myself, as the only way around the island is on foot. The ferry drops you off on a dirt road that loops around the northern half of the island, where the 50 full-time residents plus the seasonal folks live. The southern half of the island is part of Acadia National Park, with trails that take you along the rugged coastline. The plan was simple: I would spend the day running around the island, seeing the same coves, homes and ocean vistas that my grandmother saw 70 years ago.

My aunt Joanna joined me for the adventure, and we got the perfect July day for it. She picked me up at 5am, and as we watched the sun rise over misty fields on our drive, we both vowed to be morning people from now on. By the time we got to the ferry dock at 6:45am, it was already bustling with people who actually were morning people. We purchased round trip tickets and boarded the mail ferry, just as the day’s Amazon packages were loaded onto the boat. An hour later, Isle Au Haut appeared on the horizon, and there perched on a hilltop was the Point Lookout Club. The ferry captain told us it was no longer a functioning resort and was privately owned, but the owners were friendly. Aunt Joanna decided that while I was circumnavigating the island, she would walk over to the resort and say hello.

At 8am I set off for my run from the Island’s general store which hadn’t yet opened for the day, and began a clockwise route around the island on the dirt road. I quickly realized that I was easily recognizable as an outsider — everyone on the island knew each other. My neon hydration vest stood out as overly aggressive in a place where life moves slowly, and I could tell I confused some people as I ran by, but everyone still waved. The dirt road tunneled through pine trees and then crested hills that revealed stunning bay views. Unofficial trails off the road lead me down to rocky beaches where I found camping chairs waiting for guests.

Before I left for my trip I had asked my grandmother if she might want to join us for the day.

“Oh no, I’m sure it’s changed since then,” she replied. (She’s always preferred to leave the past in the past.)

But what struck me while I was traveling around the island was how little it probably had changed. Even the cars on Isle Au Haut were old. Getting vehicles on and off the island required arranging for a barge, and besides, your car didn’t need to be able to drive that far — the loop road was only 11 miles around. Building new homes similarly seemed like a major undertaking because of the difficulty of getting materials out to the island. Its remote location had insulated the island from gentrification and over-tourism.

Once I crossed into the national park area, the trail narrowed. I wound through the woods and trotted across rocky beaches. Buoys hung from trees guiding the way. Towards the southernmost tip of the island I took a trail that led up to the summit of Duck Harbor Mountain, the highest point on Isle Au Haut. On top of the mountain I looked out and saw the textbook Maine coastline from above: a wall of pine trees, dramatic rocks, deep blue ocean. It made me happy to picture this setting as the backdrop for my grandmother’s childhood memories, the ones that have stayed with her after all these years. I can see why.

18 miles later, I made it back to the general store and found my aunt sitting in the shade. The store had opened for the day and a woman named Roz was serving lobster rolls out of a food truck out front. While my aunt and I waited for our rolls, I swam in the cove and met Roz’s kids, brother and sister who informed me they were two of the eight kids who live on the island. The older sibling, a girl about eight years old, told me she already had her own lobster traps and was learning the family trade.

After lunch, we walked to the one other store on the island, a gift shop, looking for something to bring back to my grandmother. The store owner, Kendra, told us she was a third generation Isle Au Haut resident and that her grandmother had also worked at Point Lookout Club. We bought a cookbook that Kendra had put together featuring recipes from all the island families. I recognized some of the last names from my grandmother’s stories. Kendra casually offered us her car, so that my aunt could see the rest of the island before we had to take the ferry back.

We jumped in her old Subaru and I took my aunt along my running route, the car sputtering and shaking down the dirt road. We made it back just in time for the last ferry of the day.

My love of running used to make me feel different from my family. I thought it made me come off as too intense, too regimented, obsessed with achievement. But in recent years, I’ve realized that the drive that fuels my running actually comes from my family — it’s our shared love of irreverence and need to escape the drudgery of life that inspires me to run. They might not understand the running part of it, but they understand the childish feeling I get when scrambling up a ridge while crusted in salt and sunscreen, or the rush of the never-ending Atlantic coming into view as I crest a hill. That adventurous, mischievous version of my teenage grandmother who spent her summers on Isle Au Haut — I realized I do know her.

My grandmother has a sign-off she uses these days to end our phone calls: “Be good. And if you can’t be good, be careful.”

I can’t think of a better mantra for trail running than that.

Catherine LeClair is a trail runner and writer originally from Maine, now based in Los Angeles with her dog Harry. She loves reminding her friends that LA has a massive national forest just 20 minutes east of the city. Her writing has appeared in The New York Times, The New Yorker, WIRED, and more.
More From Catherine LeClair