Homepage / Community / Sisterhood of the Stroller

Sisterhood of the Stroller

Linea Jantz, M.Ed., has worked in a wide variety of roles over the years including waste management, medical records staff, after school science educator, bike law paralegal, and college instructor. She loves an interesting adventure, especially in the outdoors, and can often be found in the forest at sunrise or sunset. Her hobbies include hanging out with her awesome kids, chasing beautiful views, and defending the beauty of solo adventures. She is an avid trail runner, non-flexible yogi, and mountain bike rider. She is newly in love with kayaking, and once in a blue moon she will climb top rope if someone bribes her with the promise of a doughnut.
More From Linea Jantz 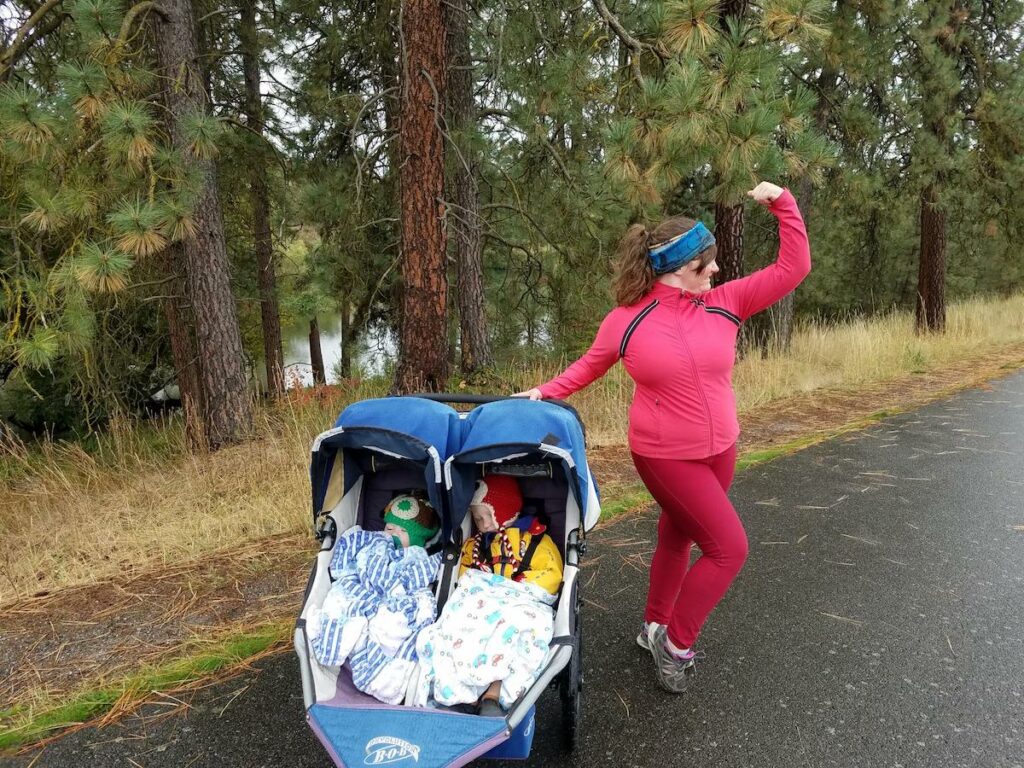 We were late. My 2 year old was full on wailing; I think because he got the granola bar with an orange wrapper instead of blue, but who really knows sometimes? My body was bent into almost a 90 degree angle trying to leverage over 100 pounds of double stroller uphill into periodic wind gusts while my friend running beside me lied and told me I was doing great. It was the best of times, it was the worst of times. Or whatever that guy (who probably never even *considered* running with a stroller) said.

Don’t get me wrong, I love the freedom a stroller gives to still get a run in when I don’t have someone to watch the kids. Back when my boys were in their teething years, there were seasons when the stroller was the only place where I could soothe them to sleep. I would spend hours walking around the neighborhood with dark-circled, bleary eyes while my ears savored the sweet sound of relative silence.

Even in 90 degree weather, my boys and I could still be found jogging down the local riverfront trail. I made my best effort at imitating a Gatorade commercial, sweat beading along every inch of my skin, as my oldest thoughtfully asked, “Mama, why are we going so slow?” So supportive.

And then there are days where the sun is filtering just right through the leaves, the birds are singing, and my kids are holding hands in the stroller and laughing together. Some days my heart could burst with how lovely these miles are. It is pretty awesome to share an activity that I love with the little humans I love most in the world, especially when their descriptions of what they’re seeing make me laugh. When my oldest was a toddler, he was convinced for weeks that any bridge we crossed was going to “Fall down! Fall down!” because of the song London Bridges. One run my boys spent the entire time counting bicycles, cheering every time they saw a passing cyclist. I’m sure they made at least one rider’s day. I even appreciate the days where I can bribe my little training buddies into if not joy, at least grumpy quiet, with the promise of a post-run doughnut or park play.

My stroller running journey started long before I bought my first stroller. While I was pregnant, I was part of a running Facebook group where a group of local moms would frequently share their experiences training for marathons, often pushing their kids in strollers. I always thought I would be someone who would exercise throughout my pregnancy, but instead was hit with constant nausea and vomiting, pain, and exhaustion. I managed to take some short walks, but I struggled just to survive my pregnancies while I watched some expecting women knock out sub-2 hour half marathons and complete 50ks. I’ll admit it could get a wee bit discouraging. But we’re all different.

Throughout my difficult pregnancies and postpartum, it was so encouraging and inspiring to see other moms supporting each other and still chasing big goals. One gal trained for what ended up being a very speedy first half marathon, pushing a double stroller for almost EVERY training run. One day after my second son was born, I was searching for some motivation to get out the door for a run. I saw that one of the women in the group had shared that her son had woken up very early–threatening to derail her plans for a 5 am run–so she had brought him in the stroller. She and her friend took turns pushing the stroller for HILL REPEATS. I was floored. And impressed. I put my shoes on and got myself out the door, which is always the hardest part of a run, in my opinion.

As I get older, I realize even more what a rare gift these women’s vulnerability and encouragement to us new runners was. It’s a lot more fun to share our triumphant race results and PR workouts than to share the early morning slogs after a night up with a sick child, the period cramps, the runs where our legs feel like lead, the “boring” daily grind…but the openness and humor of those other stroller moms encouraged me to eventually train for and complete my first triathlon. Then my first half marathon! And then later that year, my first marathon (on trails none-the-less!) and then the next year I started running ultras. All of these goals were things that I had been too scared to try when I was forty pounds lighter and in the best shape of my life. But because these women shared not only their highlights but the hard runs and the difficult mom moments, I took a chance on myself and my big scary goals and ended up surprising myself beyond my wildest dreams.

I am currently in a season where my youngest is almost four and I mainly need to run with the stroller when my husband is out of town, but here is my message of solidarity to the running moms newly in the trenches of a “mainly running with toddlers and babies in the stroller” season:

For the non-stroller runners, don’t underestimate the power of a “Nice job, Mama!” (or Dad!) as a stroller runner passes. There were days where I ran with tears in my eyes because some words of encouragement were so appreciated. Also, when I’m running solo with a friend who is pushing their stroller, I offer to help push the stroller for part of the run so they get some time to run in their regular stride and get a bit of a break. Not every mom wants that assistance, but I haven’t run into anyone yet who didn’t appreciate the offer.

If you are in a stroller season, I am so excited that you’re taking this time for yourself, to still get out the door and run. I hope this stroller brings you some fun memories and makes you stronger than you thought you could be, both physically and mentally. Welcome to the sisterhood of the stroller. Get after it!

Linea Jantz, M.Ed., has worked in a wide variety of roles over the years including waste management, medical records staff, after school science educator, bike law paralegal, and college instructor. She loves an interesting adventure, especially in the outdoors, and can often be found in the forest at sunrise or sunset. Her hobbies include hanging out with her awesome kids, chasing beautiful views, and defending the beauty of solo adventures. She is an avid trail runner, non-flexible yogi, and mountain bike rider. She is newly in love with kayaking, and once in a blue moon she will climb top rope if someone bribes her with the promise of a doughnut.
More From Linea Jantz