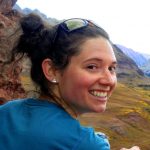 Erica lives, works and plays in Summit County, CO. Her best days are those spent outside exploring a new place powered by her own two feet. She got her running start in the summer before eighth grade, when she ran a loop around the neighborhood to decide whether or not to go out for the cross country team. These days, she mostly puts in her miles on the beautiful trails outside her door in her mountain home. When not running, find her with a thought-provoking read or making something delicious in the kitchen…or, preferably, on the camp stove.
More From Erica Rackley 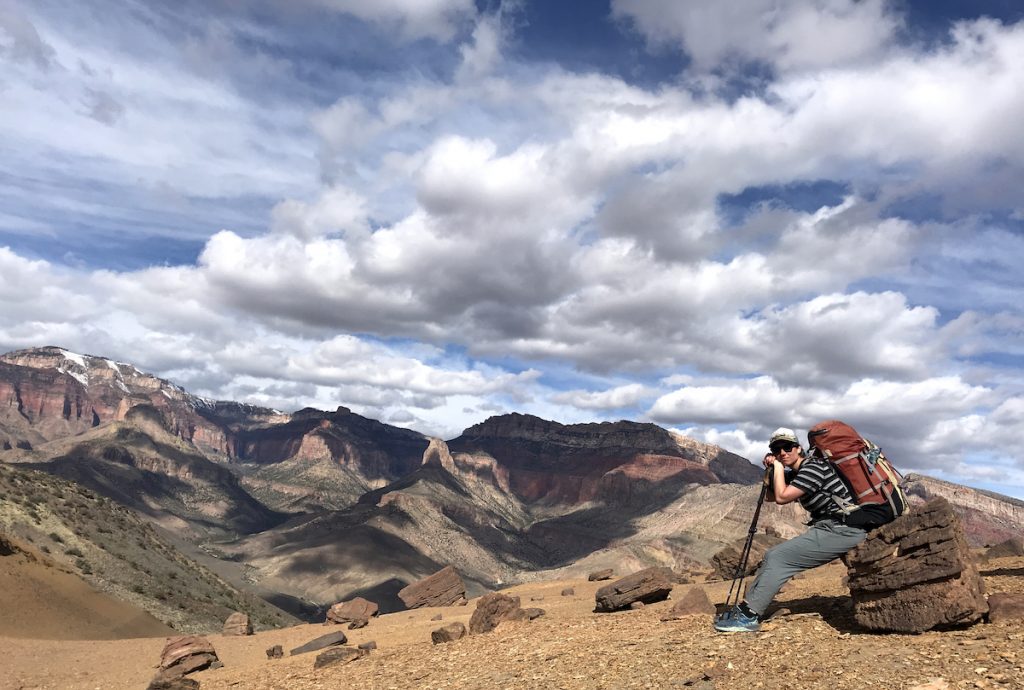 One month ago, I emerged to an upside down world.

On this day in March, my companions and I awoke to the day’s first muted light along Bright Angel Creek at the bottom of the Grand Canyon. It was the eleventh and final day of a backpacking trip that began, we would come to understand, a lifetime earlier, when the first report of community transmission came from California. Eleven days earlier, as we said goodbye to our shuttle driver and descended into the canyon, we did not know that we’d already said goodbye to most semblances of normalcy above the rim.

And what an eleven days they were. Our party of six passed a ranger hiking out around mile one on day one. He would be the only other human we encountered until the morning of day ten when we reached established trail again. Our packs were heavy with food for the trip’s duration and water for the first two days. Yet as we hiked away from the trailhead, we were in fact as unburdened as we would be for a long time.

The backpacking trip involved all manner of shenanigans. We traveled cross country through eastern Grand Canyon. Our trip began and ended on the trail, but for seven days in between, we followed our map across the otherworldly elegance and ruggedness of the Grand Canyon, tracing her contours and seeking the passage of least resistance. We schelped our packs and bodies up 45-degree scree slopes and, more excitingly, descended the same. We tip-toed through cacti and labored up thickly vegetated gullies. We sacrificed our skin to limestone and the textiles we wore to a generous variety of pokey things. We made just a few, shall we say, high-consequence moves. The Redwall limestone is, after all, a cliff-forming layer, and we managed to ascend and descend it three times sans trail. We negotiated terrain features we nicknamed the Talus Slope of Tedium and the Ledge of Concern. In short, it was totally awesome.

It was awesome because at the top of each hard-won climb, we arrived at yet another saddle with yet another surreal view of this magical place. We were alone, suspended on an island overlooking bands of rainbow-colored rock and castles and towers. Or we were sheltered in a lonely creek bottom, sleeping to the sound of melted snow singing and sliding past us on its way to the river. At the very first and very last light of each day, we saw colors unknowable elsewhere. We time traveled as we hiked through valleys filled with ancient marine fossils the size of small cars. We saw both winter revisit the North Rim and spring’s bloom begin.

For eleven days, I felt strong. I felt good at something. I particularly welcomed these feelings of strength and competence after feeling a distinct lack of them so recently. Just two weeks before, I’d been running my “A” race. I lined up feeling fit and ready on race morning. I was back for my third attempt at a competitive 100K, eager for my best result yet. I’d done okay in the past, but I knew I was capable of much more. So I arranged my life over the winter to best accommodate training. I’d put in the work and was ready to cash in my chips. But running offers no guarantees, and I found myself in a teary crumpled heap awaiting a ride off the course at mile forty-six, hours behind goal pace. Heat-related issues ended my day early. After such a disappointing swing and miss, I set out on the backpacking trip eager for something that felt like a success.

And so, on this morning one month ago, I slowly woke under a clear sky, sadly aware that only a few hours of hiking remained of my backpacking journey. It was March 16.

We weren’t entirely unaware of the developing situation. Two of our hiking companions carried GPS devices that could send and receive texts. They had each received hard-to-believe updates from their wives during the second half of the trip. These 160-character bits shared only enough info to raise unanswerable questions, and we could, of course, do nothing about any of it from the bottom of the Grand Canyon.

So up we hiked. All seemed fairly normal at the bottom, the usual suspects present: vacationing families, mule trains, trail runners. But while refilling my water bottle halfway up, I overheard a Canadian hiker tell someone that his prime minister “had it.” And when we encountered some friends of one of our hiking companions and stopped to chat, one friend confirmed a weird piece of news we’d heard about toilet paper. She halfway joked that there was none, except for one four-pack available on Amazon for seventy-five dollars. We’d heard rumors the previous night that restaurants were shutting down, and the friend confirmed that rumor, too, saying that Colorado had “already closed everything.” Something shifted inside me when I heard that comment; Colorado is home. What awaited me once I returned home?

We arrived at the rim just before noon. Though it was busy, it was far less busy than the average Spring Break day, and all the bookstores were closed. Our group enjoyed lunch inside the El Tovar hotel, the last meal I’ve eaten in a restaurant since. The normally packed dining room was only half full. Our phones buzzed; we compared info. Ominous darkness overshadowed the familiar post-trip glow.

After lunch, we went our separate ways, leaving behind the solvable problems of a backpacking trip to deal with the powerless feelings of living during a global pandemic. I drove one fellow hiker to the airport where he rented a car for the two-day drive home, declining to fly as planned. Over the following hours and days, we pieced together the scene to which we’d returned. Everything felt upended. One thing was certain: I wanted to resupply and head back into the canyon, the one place that felt safe, the place where I’d actually felt like myself, and a place where coronavirus wasn’t.

But I didn’t turn around and go back into the canyon. Instead, I rejoined society and have now negotiated one month of pandemic life. Even before coronavirus and the backpacking trip, question marks characterized my future. My lease and winter job ended soon, and I’d been hunting for a summer home and summer work. Now, a month of unexpected changes has passed. I realize I am lucky; unlike so many others, the ways my life has changed don’t involve tragedy.

One thing in life feels remotely right side up: running. My body doesn’t necessarily feel great each day when I run. I no longer share my miles with a training partner. And even though I love to run, some days I still wonder, what’s the point? Like so many others, my upcoming race is canceled, and my other big goal for the year is up in the air. I’m registered to take another shot at the July 100 miler that so thoroughly ground me to bits last year. I know the race may not happen, but I also know that a good end-of-summer 100 is the result of work done in April, May, and June. So out the door I go each day, wondering what will happen and reminding myself that I enjoy running for its own sake anyway.

Another thing that feels right side up: regular hikes with the members of my household. We can walk out the back door into the forest and see no one. Something about escaping the vortex of the house, soaking up the sun, and hugging a tree seems to keep us all a bit more sane than we’d otherwise be.

From my February DNF to my March backpacking trip to April’s daily miles, I’m thankful for a few consistent things in my life: a beautiful place to call home (for however long it may be), a body that is able to run and hike, the daily ritual of lacing my shoes and putting in the work, and the loving people in my life. I don’t know what May 16 will bring, but I’ll keep running and hugging my people until then, even if the hug must be virtual.

Erica lives, works and plays in Summit County, CO. Her best days are those spent outside exploring a new place powered by her own two feet. She got her running start in the summer before eighth grade, when she ran a loop around the neighborhood to decide whether or not to go out for the cross country team. These days, she mostly puts in her miles on the beautiful trails outside her door in her mountain home. When not running, find her with a thought-provoking read or making something delicious in the kitchen…or, preferably, on the camp stove.
More From Erica Rackley