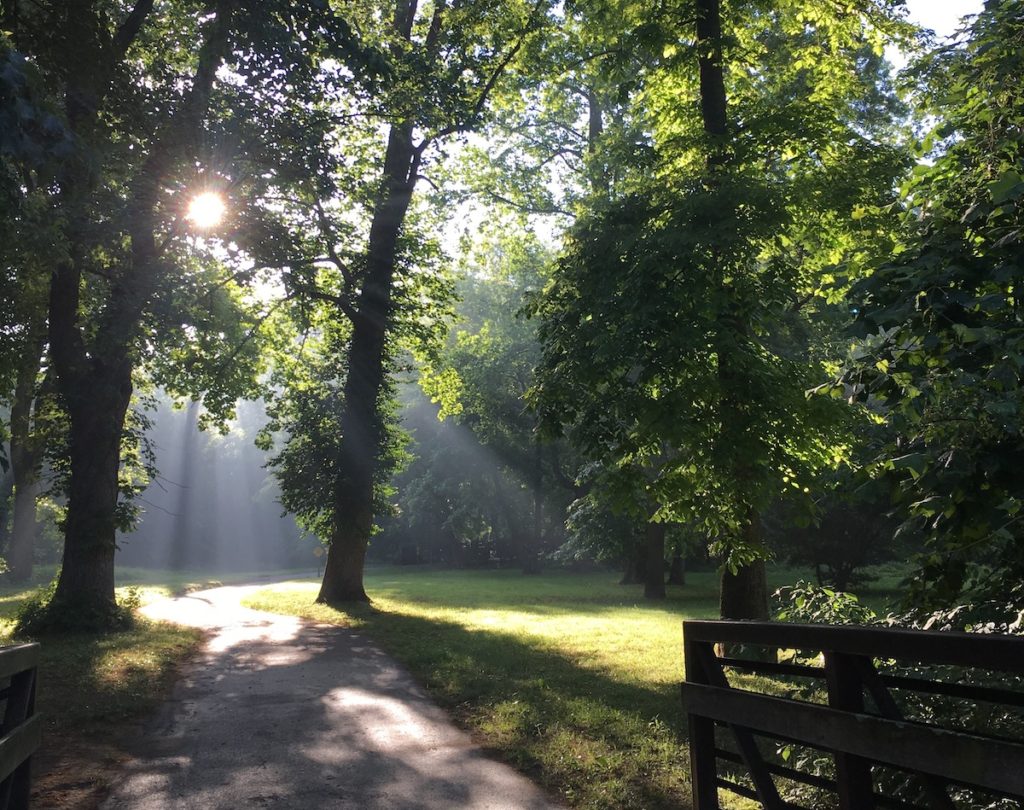 In this second installment of Geology on the Run, we explore just a few trails of the many great ones frequented by trail runners along the East Coast. Many of the landscapes traversed by these trails formed during a period in Earth’s history when there were not yet land plants or animals. As a result, trails would have followed barren landscapes, not unlike those above treeline today. Several of the landscapes hosting these trails formed from the same geological events. Let’s take a travel through some of these ancient landscapes and imagine the scenery millions of years ago.

The Shut-in-Trail is located near Asheville, North Carolina, and is part of the larger Mountains-to-Sea Trail that extends for 1,200 miles from Clingmans Dome in the Great Smoky Mountains to the Outer Banks of the North Carolina coast. The Shut-in-Trail covers about 17 miles of this, from Buck Spring Gap near Mt. Pisgah to the French Broad River, following the Blue Ridge Parkway. The trail has historical roots and was first created by George W. Vanderbilt around 1890, to connect his hunting lodge at Buck Springs to his Biltmore Estate near Asheville. Today, runners and hikers alike enjoy covering all or a portion of the Shut-in-Trail, and races, such as the Shut-in-Ridge Trail Run, are held here each year here on the ancestral lands of the East Cherokee and Yuchi peoples.

Running along trails here during these periods of active mountain building would have offered the runner an abundance of vert! Similar to running in the Himalayas or the Rocky Mountains today, peaks and ridges would be prominent and ragged. There may have been few areas of flat running, with intense climbs and steep descents. The Ordovician Shut-in-Trail runner would stock hydration packs with plenty of water, snacks, and gear for inclement weather. Storms may have appeared out of nowhere along ridgelines and peaks, forcing the unsuspecting runner to take cover and retreat to lower elevations when caught off guard. The trail runner would wear the proper footwear to offer both protection and traction from areas of unsecure footing.

Because of the continental ice sheets that covered much of this area during the late Ordovician, trail runners on the Shut-in-Trail may have been, at times, running in cold weather gear and wearing spikes on their shoes; or perhaps, some may have forgone post-holing through the deep snow altogether, in lieu of skiing, snowshoeing, or ice climbing.

Because animals did not move from the oceans to land until plants moved onto land in the Silurian Period (443 million years ago), Ordovician trail runners traversing the Shut-in-Trail would not encounter any plants or animals along the way. Imagine every run looking like a run above treeline, with little more than mountain bedrock and scree slopes to see along the way. The occasional earthquake would remind the trail runner that the mountains were still rising.

Yet, during interglacial periods, the Ordovician trail runner would be greeted by a cool, refreshing breeze, warm sunshine, and views for miles when reaching a summit. The climb and hard work, as it is today, would have been worth the views. It would have been much like skyrunning today; perhaps it could have been called Appalachian skyrunning.

The Rock Creek Trail is found in Rock Creek Park, Maryland, and extends from Rockville to the Maryland-Washington DC border. It consists of 18 miles of paved paths and follows a mostly wooded route along Rock Creek, which flows into the Potomac River. Rock Creek Park is one of the largest natural urban parks in the country and hosts an extensive network of trails, both dirt and paved, on the ancestral lands of the Nacotchtank, Piscataway, and Manahoac peoples.

The park and trail are located on the Piedmont Plateau, adjacent to the boundary with the Atlantic Coastal Plain. These two physiographic provinces formed during the Ordovician Period, resulting from the same mountain-building events that formed the Blue Ridge Mountains hosting the Shut-In Trail. The Piedmont Plateau is a transitional zone between the folded and recrystallized rocks of the Blue Ridge Mountains and the sedimentary rocks of the Atlantic Coastal Plain, forming an area of ridges, waterfalls, and rapids. Just west of Rock Creek, a large fault zone cuts the bedrock and was initially active during igneous intrusive events, during which magma moved beneath the surface. The fault was later reactivated during the late Paleozoic Alleghenian Orogeny and is one of the few known tectonically active sites in the eastern United States today. The Atlantic Coastal Plain is predominantly flat and extends from New York to Georgia and eastward to the Chesapeake Bay and the Atlantic Ocean. It formed from a combination of sediments eroded from the mountains and marine sediments.

The Ampersand Mountain Trail in Saranac Lake, New York, traverses Ampersand Mountain, named for Ampersand Creek, which sits at 3,353 ft in elevation on the ancestral lands of the Haudenosaunee and Mohawk peoples. The trail is about 2.5 miles one way, with an elevation gain of 1,765 ft. W.W. Ely was the first to bag the peak of Ampersand Mountain in 1872. A fire tower to spot area wildfires was erected in 1922 and remained in use until 1970. It was removed in 1977.

Ampersand Mountain is one of the peaks in the Adirondack Mountains, which began to form around 20 million years ago, during the Miocene Epoch, for reasons that remain poorly understood. What we do know is that a circular dome about 150 miles across began to rise. Over time, rocks originally deposited 1.3 billion years ago and buried beneath as much as 15 miles of sediments were exhumed, or re-exposed, as the mountains uplifted and the sediments were removed by erosion. Today, the Adirondack Mountains continue to rise at a rate of 0.15 in/yr (Isachsen, 1981) and these very old rocks remain at the surface, with some consisting of garnet-bearing granite, as well as tourmaline and beryl.

The Miocene trail runner traversing Ampersand Mountain would discover an evolving landscape surrounding the mountain, in which forests were dwindling and grasslands were expanding. Geologists believe the loss of forests on a global scale may have been one driver of bipedal hominid evolution, and by the Miocene Epoch, Sahelanthropus tchadensis and Ardipethecus ramidus, perhaps the two earliest bipedal hominids, had evolved. However, these ancestors of ours had not yet migrated out of Africa, and so the Miocene trail runner in the Adirondacks would not have encountered them. Other mammals, such as horses, benefitted from the expansion of grasslands and the Miocene trail runner would have encountered 3-foot tall Merychippus grazing along the route. Many species of birds had grown to great sizes by this time, and the trail runner would likely have also encountered Titanis walleri, the last of the terror birds.  Titanis weighed 330 pounds, stood 5 feet tall, and could run as fast as a modern ostrich. These terror birds arrived here around 12-15 million years ago when the Americas became connected and the Great American Faunal Interchange took place. Elephants, camels, horses, and deer, as well as large cats, wolves, and bears, migrated from what is now North America into South America. Giant ground sloths, glyptodons, hoofed mammals, and terror birds migrated from South America. Later in the Miocene Epoch and into the Pliocene Epoch, the Earth would again cool, and a series of ice ages would mean a return to donning cold-weather gear and spikes, while post-holing over a snow-covered Ampersand Mountain Trail, or perhaps ice climbing the glaciers. 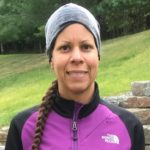 Kuwanna is a life-long runner and a field geologist with a love of running adventures and field work. She has completed several marathons and is now exploring ultra distances. She is originally from Nevada and would love to see more BIPOC women running the trails. When she is not running, you will find her teaching geology courses, researching ancient river and lake deposits, all while trying to keep up with two daughters and a patient husband. She is a connoisseur of gluten-free beer and granola.
READ ARTICLES 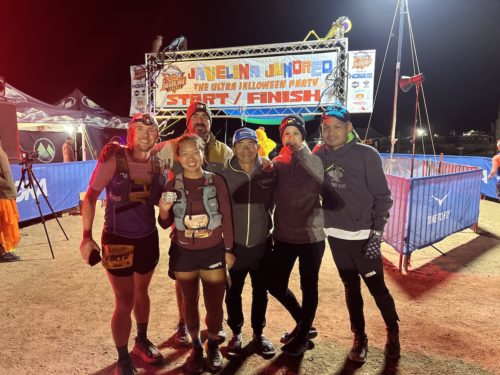 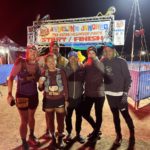 Loving Where You Are At

Running Away from Goals and Towards Intentions